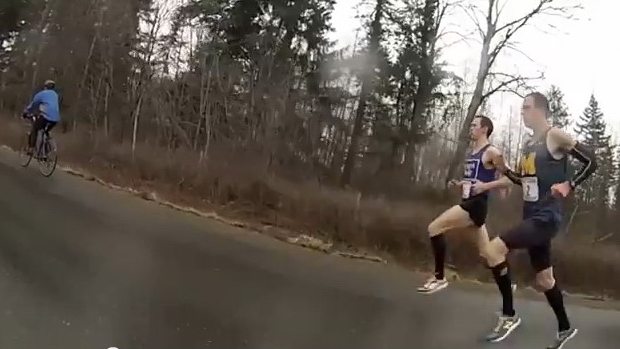 The Comox Valley Marathon took place today, Sunday March 24th, under cool, breezy conditions with light drizzle. Five hundred and twelve runners started the race at 11:00 AM in downtown Courtney, BC. The winners were Geoff Martinson and Catrin Jones, of Victoria, BC.

Martinson finished the event in 67:01. He is a 1500m specialist, who has recently turned to the roads and has been competing in distances from 5k to the today’s half-marathon. After the race he said, “Under the conditions I probably couldn’t have gone much faster.” Martinson was helping out with pacing second-place finisher and first master (40-plus) for most of the race as Jim Finlayson was seeking the Canadian master’s half-marathon record of one-hour and six minutes and thirty-three seconds. Finlayson entered the race as the course master’s record holder of 67:25 and today he improved that standard to 67:10, less than 40 seconds off of the national record, which is currently owned by Steve Boyd of Kingston, Ontario. The open course record is 63:57, set by three-time Olympian Jon Brown from the 2005 event.

Catrin Jones took in the half-marathon after having landed the previous night after two days of travel from the Rift Valley in Kenya. She was on a mini-training stint while taking in the inaugural Rift Valley Marathon, which she ran in 2:51 on Saturday, March 16th. Jen Millar led the race for over 17kms, before Jones took over for good. Millar finished in 1:20:05, while Jones finished in 1:19:48. Third place went to Parksville, BC’s Melissa Ross in 1:21:48.

Martinson and Finlayson started off running the first kilometre in 3:14 – a little slower than intended, and continued to run conservatively through 3km. At half-way, they had come close to the pace they needed to break the record however; a steady headwind after the 14km mark, coupled with cool temperatures tempered the pace.

Third place overall and second master was Craig Odermatt of Victoria who finished in 1:12:19. He has run as fast as 1:11:19 on the course from the 2011 edition. Odermatt was followed in by former UVic Vike Nick Walker who ran 1:12:44. Walker was using the race as part of his training preparation for his first marathon, which he will compete in at the BMO Vancouver Marathon in early May.

Finlayson will continue to chase the half-marathon record if a suitable course is available this spring. Additionally, he will be racing the Vancouver Sun Run and the Time Colonist 10k. The Canadian 10k record is 30:09 and was set by Graeme Fell at the Vancouver Sun Run. Finlayson said, “I knew going in that with my fitness I would be close on the right day, but yeah, it was just a little cool and windy.”

In response to the question about whether Finlayson thinks he can challenge the Canadian 10k road record he said, “I believe I am more suited to the half-marathon distance and based on today and some recent workouts, I think I am capable of about 30:30. We will see, if things come together I may consider looking at the record.” Finlayson ran the Synergy Health Bazan Bay 5k two week earlier in 14:55.

The Comox Valley Half Marathon is the eighth race of the BC Timex Road Race Series and race number six of the Vancouver Island Race Series. Full results are available at: www.racedaytiming.ca.

Harry’s Spring Run Off 8k – Details will be available soon. Kip Kangogo of Lethbridge, Alberta defended his title with a win today in 24:23, he was followed in by Abbotsford, BC resident David Jackson, who finished in 24:48 and Sam Pawluck of Vancouver, BC in 25:14.

Kate Van Buskirk of Toronto, Ontario won the women’s race in 27:10, she finished ahead of Sabrina Wilkie of Vancouver, BC who crossed the line in 28:22 and the first master, Lisa Harvey of Calgary, Alberta. She is the defending champion and finished in 28:29.