The 2015 Toronto Pan Am/Para Pan Am Games athletics events start off with the women’s marathon race Saturday the 18th of July. Listed below are 17 competitors ranked in order of the qualifying time rather than personal bests.

The 28-year-old (29 in August) Melchor on the surface appears to be the most capable marathon runner, just as her personal best suggests. Her 5,000m, 10,000m and half-marathon bests match to her marathon record fairly well and all of her personal best performances from 1500m up to the marathon have happened within the previous two years. She looks poised for a medal and perhaps gold. Her two best performances are most recent; however, they were run during the most favourable conditions. She achieved her 2:26:48 marathon time during the very fast 2014 Berlin Marathon and her 10,000m best during the 2015 Payton Jordan Invitational finishing in the time of 31:56.62.
Prediction: Second place 2:32:30

Twenty-nine-year-old Tejeda has just as much of a chance to win gold, based on her personal bests as countrywomen Melchor does. Her half-marathon is nearly a minute faster, however during the Payton Jordan Invitational 10,000m Tejeda finished behind Melchor. Her marathon personal best is less than 90-seconds slower than Melchor’s on a different course – Rotterdam 2015. It appears Tejeda performance trajectory is on an upswing, considering her personal bests have all been accomplished with the past year.
Prediction: First place 2:32:00

Canadian Rachel Hannah comes in with the fourth best marathon performance to date at 2:33:30; however, it was achieved during the Ottawa marathon, which provides a moderately fast course, but not as fast as Houston, Rotterdam and certainly not anywhere as close as Berlin. In theory her 2:33:30 performance could represent two to four minutes faster at the other events. Saying this, her 10,000m best – also at this year’s Payton Jordan Invitational matches a 2:37-plus performance. Little can replace home course advantage. Hannah racing at home may just be the difference from her running top-six and medalling.

“I am looking forward to the Pan Am Marathon on Saturday. Training has been consistent and I know there will be tremendous Canadian pride and support out on the course on Saturday. There is no better feeling than the excitement surrounding racing for one’s country on home turf,” shared Hannah.
Prediction: Third place 2:34:00

American Lindsay Flanagan could surprise and medal; however, based on her range of distances and experience with the longer events, she may be another marathon or two away from a sub-2:30:00 performance. Her best in the marathon is strong enough to warrant a medal watch and was run recently enough in January at Houston. Her Payton Jordan 10,000m performance was also right in the mix. Anything can happen and she should not be counted out.
Prediction: fifth 2:34:30

Natalia Romero of Chile has yet to perform as well as her 2012 personal best at any distance. Although 35 is not too old for the marathon as proven by 38-year-old Beijing gold medallist Constantina Dita, Romero hasn’t done much else as a competitor. Dita, for example had a long and competitive career.

Carmen Patricia Martinez does not appear to stand a chance, however, interestingly she has run personal bests in the marathon each year since 2011, starting with a 2:55:11 performance and working her way through the 2:40s, and down to 2:36:01 this year. Although it is doubtful she will contend for a medal, based on her trajectory – just squeezing the math a little, she may be capable of a 2:33:00. 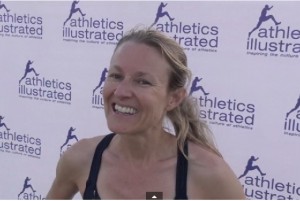 astest Canadian women leading up to the event that had declared interest in going to the Pan Am Games. She is over 40-years-of-age, however, she started running seriously as a master and has therefore run all of her personal bests recently. She should not be in contention to medal, however, she can be a fan favourite. She’s a mother, a late bloomer, a Canadian on home soil and a great all-around person. She may well run a personal best. Prediction here is she doesn’t end up last and runs close to 2:40:00 +/- one minute.

When asked about her preparation Watkins said, “I had a much smaller prep period than usual for this marathon as I found out three weeks prior that I would be running it. I have done some longer pace runs in that time and limited my taper.”

“I am excited to toe the line and to see how much of my fitness from my previous marathons carries over. It is a championship race on a tough hilly course with potentially hot and humid conditions so anything can happen. I look forward to pushing myself and competing while representing Canada on home soil. I am really excited about all the cheering crews out there and the amount of support from the running community.  I plan on soaking in the experience,” added Watkins.

The weather forecast predict warm conditions with an overnight low of 19 degrees and a daytime high of 31, there appears to be a potential for cloud cover.