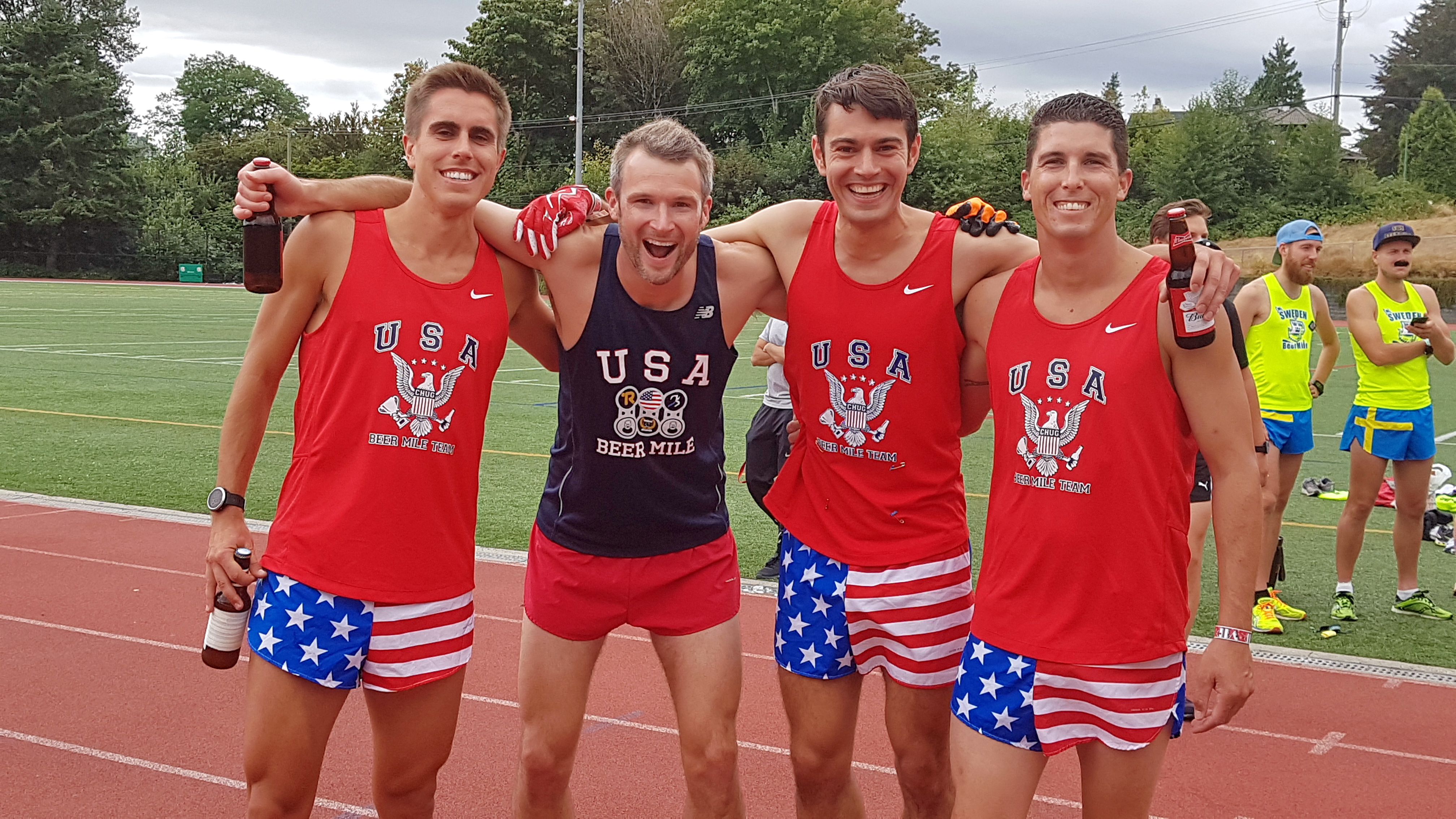 Corey Bellemore filled the unforgiving minute with sixty seconds run on Sat. August 11 in Greater Vancouver. Well, it was 62 seconds, but close enough.

A who’s who of beer mile racing assembled at a secret location for the 2018 World Beer Mile Classic and it was a barnburner of a race.

Putting aside the fact that several disqualifications happened due to too much beer remaining in bottles, it was the fastest and deepest beer mile race in history.

Bellemore finished in the time of four minutes and 24.44 seconds to completely destroy his own meteoric record of 4:33.6 but was disqualified after the customary post-race measure of his remaining beer. He left more than the four ounces permitted.

He got off to a very fast start for his first lap which was completed in one minute and two seconds including drinking his first beer.

Dale King-Clutterbuck of Essex, UK who owns the second-best time in the world of 4:45 was running second, but was well back. It was clear from the 200-metre mark that Bellemore was looking to improve his own world record by a large margin. He never let up.

He continued on his torrid pace, however when reaching for his third beer, he tipped over his fourth bottle, which caused it to foam up upon opening. Bellemore would finish with another 62-second lap including beer, however, he had too much foam and liquid remaining in the final bottle and was subsequently disqualified.

“I thought I could go sub 4:30 today, but I was surprised by the finish time,” said Bellemore. “Unfortunately, the last bottle had too much foam, so it is not official, but I don’t think the small amount of beer left would have affected my time if I had finished it. So I am sure I can run that time again.”

Kent Lewis who owns the third fastest time in the world was on hand; however, he has been off with an injury for a lengthy period and is just beginning to run again. He ran the “B” race for fun.

“I would like to challenge for the world record again. Maybe next year,” said Lewis. “But I had an undiagnosed injury for some time that finally blew up this year. I am better now and I just started running again. Bellemore ran an amazing race. No one was going to challenge him today.”

And that is all anyone was interested in talking about.

John Markell, who has run more beer miles than anyone said, “His (Bellemore’s) performance was amazing.”

King-Clutterbuck said, “I respect him as a runner. We are friends and race in Europe together. We are competitive in straight running, but his beer drinking is absolutely amazing. I just couldn’t believe it.”

Mountain View, California’s Garrett Cullen with Team USA finished in fourth position, however, moved up to second place, when the third-place finisher American Chris Robertson was also disqualified for having too much beer remaining.

American Brandon Shirck who finished in sixth position moved up to third as Canadian Iain McCormick was DQ’d. They finished in 5:01.27 and 5:02.20, respectively. Shirck owns a best of 4:47, while McCormack’s pb is 4:56.

There was a small delay with the final results and at first it appeared that Team Commonwealth had won the team event, however, it was later determined that the USA defended their title from 2017.

“Commonwealth at first won, but it was Team USA’s. I had to have the runners declared, who would count for the points, so based on those athletes finishing the US won,” said Race Director Nick McFalls.

Four teams contested the 2018 World Beer Mile Classic, USA, Canada, Sweden and Team Commonwealth, which was made up of runners from the UK and Australia.

In the women’s race there were three competitors and Briony Pearce, the defending champion from Manchester, UK, won again. She finished third out of three and well back, but won by virtue of disqualifications. She also vomited before the race was over, so was penalized one lap. She finished and was later determined the winner.

Even though she won, she – with tongue-in-cheek – declared the day as her “worst ever,” yet she ran again, successfully taking a leg in the mixed four-person relay.

American Caitlin Batten, the 2015 World Beer Mile Classic champion with a 6:28 personal best led for three laps. Laura Riches (6:30 pb) was hot on her tail at the end of the first lap, faded for laps two and three, then sprinted an all-out fourth lap, taking Batten with 200-metre remaining to cross the finish line first.

The Rugby Union and Rugby 7s player from Manchester took it all in stride.

“Well, I did this for fun. I had switched to running, but it is not quite working out, so I am going back to rugby. I have been on loan to the premiership in 15s and played 7s as well, but this was a fun last race.”

Bellemore rented a boat and a few of the beer milers spent Friday swimming at some nearby waterfalls.

“Hey, I don’t get out here too much, so it was nice to visit Vancouver; we had a good time here at the race and in the water yesterday.” 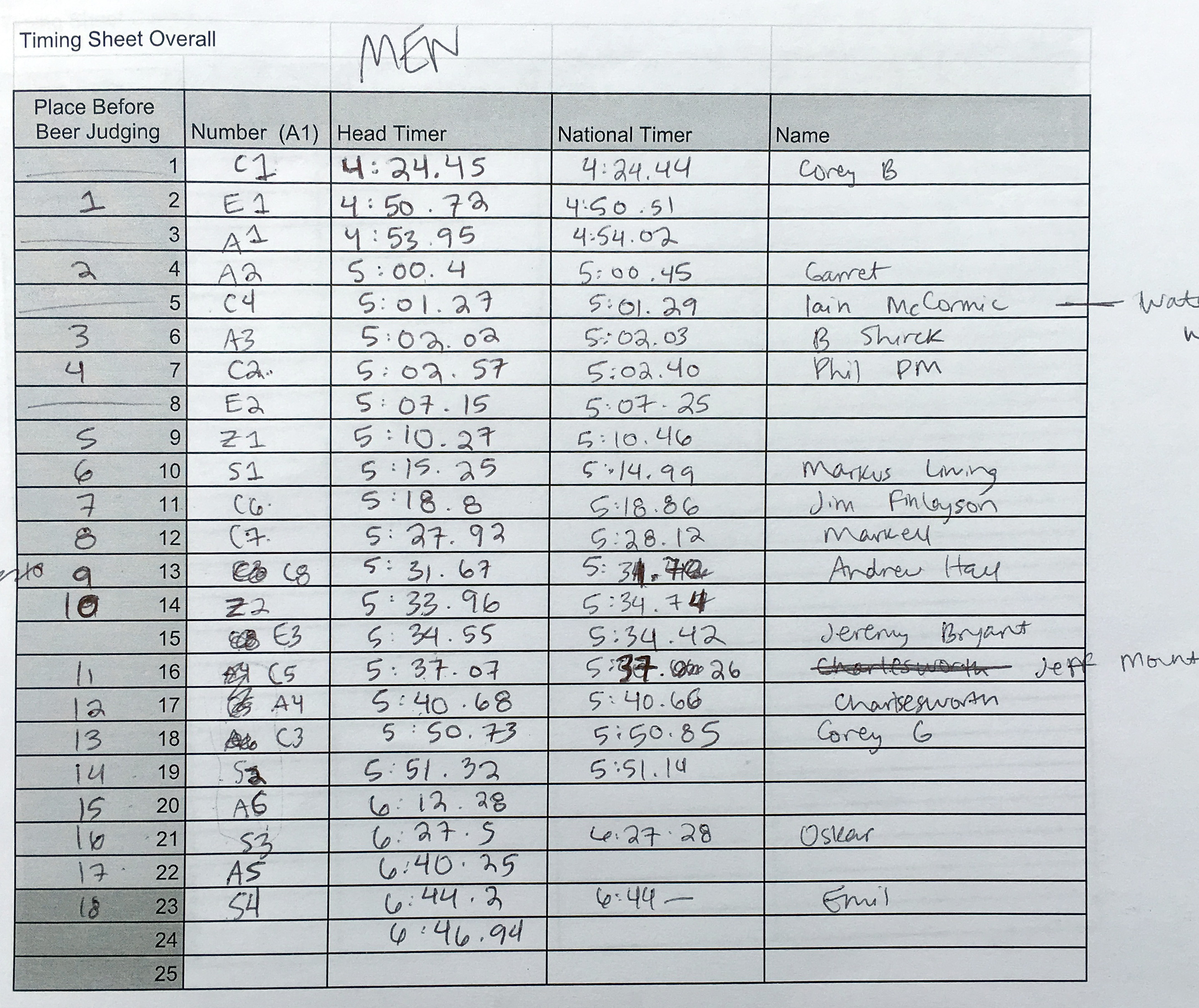