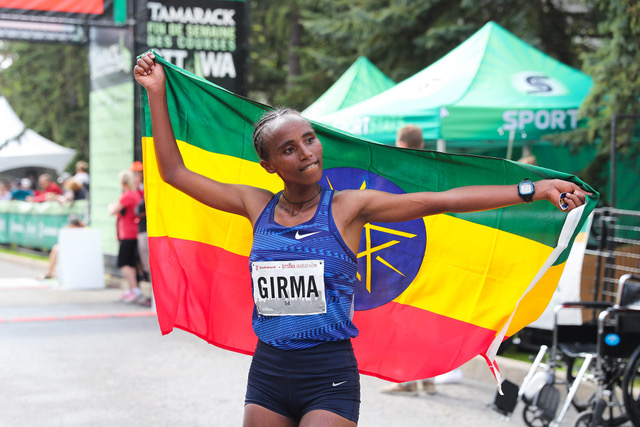 Ethiopian women had enjoyed a 10-year winning streak at the Tartan Ottawa International Marathon before the COVID-19 pandemic forced the event’s cancellation the past two years.

Now that Tigist Girma, the most recent champion, has announced she will return to defend her 2019 title, the odds of the streak being extended have increased dramatically.

On May 29th, the 28-year-old from Shashemene in south-central Ethiopia will be joining the event’s 2018 winner and course record holder (2:22:17), Gelete Burka on the startling line of this World Athletics Elite label race.

The matchup has race organizers excited about the potential for a new course record. Two world-class Ethiopians, born less than 30 kilometres apart, challenging each other for the prize money and record bonuses? A storyline worthy of an Oscar.

Tigist had a modest resume when she first came to Ottawa in 2019. Victories in the 2016 Beirut and 2018 Guangshou marathons were highlights, but she ran away from the world-class field in Canada’s national capital to record a new personal best of 2:26:44.

Although that time was not extraordinary by today’s standards, what startled marathon aficionados was the fact she had destroyed a world-class field with a sublime display of front running.

“Many things have changed since then,” she reveals from her manager’s office in Addis. “I ran fast times and from the gold label races I got into major races.”

“The races I ran after Ottawa were good. For example, because I ran both in Ottawa and then Amsterdam, it helped me to be selected for the Olympics.”

Three years ago in Amsterdam, Tigist joined an elite group of sub 2 hours and 20-minute runners, where she recorded a personal best of 2:19:52 for second place. A fifth place at Tokyo in 2020 (2:21:56), a World Marathon Major, and a sixth place in Valencia (2:19:56), reinforced her stature as a world-class talent worthy of representing her country.

With the Olympics delayed a year due to the pandemic, the Ethiopian Athletics Federation held a ‘marathon trials’ in Sebeta over a 35km distance. That was in May 2021. Tigist won this race finishing 22 seconds ahead of Birhane Dibaba (with a personal best of 2:18:35) and almost a

minute in front of her training partner, Roza Dereje. The latter has a marathon best of 2:18:30 and eventually finished 4th in the Olympic marathon held in Sapporo, Japan.

Clearly, Tigist was in top shape and ready for her Olympic debut. Unfortunately, she never made the flight to Japan.

“Because of the pandemic, before my departure,  I had a PCR test and the result showed I was COVID positive,” she explains.

“It was really a sad moment to me. I trained and struggled for more than a year to get into the Olympics and I got the chance to attend, meanwhile knowing that I couldn’t run in last minute it was really hard for me. It broke my heart.”

Still, she recognizes the importance of her Ottawa victory and how it impacted her professional career.

“From all the good memories I had in Ottawa, what I remember the most is how the people of Ottawa were supporting and cheering me,” she fondly remembers. “It really was a good morale booster for me to win and, of course, Ottawa is a beautiful city, which captured my heart.”

“It was a difficult race. I ran much of the race alone and this impacted me not to run as good a time as I expected. Even though I am happy that I won the race, if I had a competitor beside me, there could have been a better time.”

After her success in Ottawa – and earning $30,000 for her effort – she was able to buy a house in Addis. And her sister moved to Addis too although she doesn’t live with her. They make the five-hour journey to see their parents in Sheshemane when they can.

Tigist is still training in a top-class group coached by Haji Adilo, the Ethiopian Olympic marathon coach. Among her training partners still are Roza Dereje, Ruti Aga (2019 Tokyo Marathon winner), and Mare Dibaba, who was the 2015 world marathon champion and 2016 Olympic bronze medalist.

“I was injured a few times. After the Olympics, I didn’t have much of good training, but now I am in good shape and want to do better (in Ottawa),” she reveals. “I am still training with coach Haji. I get all the support from him.”

“With the help of God I want to win and even break the course record. I want to put my signature in Ottawa for the second time.”