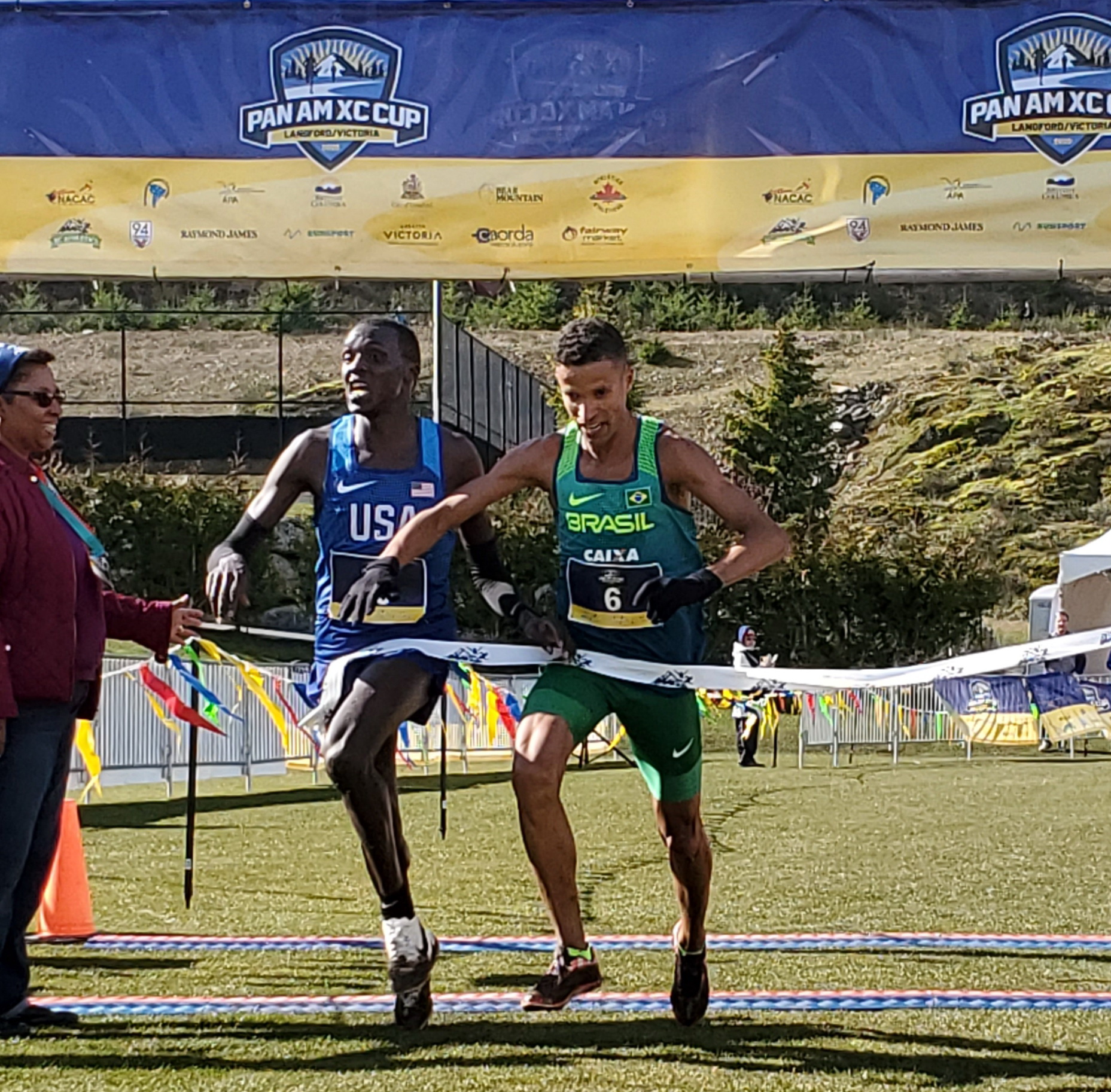 They came, they fell in love, they left – and they may be back.

“This place is amazing. My fiancée loves sunrises, that’s her thing and unfortunately, she wasn’t able to come on this trip. I had the most amazing sunrise from my balcony at the Westin hotel this morning. I face-timed with her during it and she said, “I should have come.” So we will be back soon,” said USATF Coach Terry Lovely.

“This place is so beautiful, the nature, the forest, ocean, and mountains. I love it,” said Brooke Rauber from Syracuse NY.

In the men’s senior race, there was no surprise that Anthony Rotich would be the pre-race favorite, however, Johnatas De Oliveira Cruz from Brazil was hot on his heels for the entire 10K route. The course offers a series of rolling hills, with steep pitches, turns on hills and long gently rolling down sections – and one notoriously big hill that was talked about by everyone – it was the deal-breaker offering over 30-metres of elevation gain in the less than 200m – run five times at the senior level.

“You have to be strong on the hills or there will be separation especially over that big hill,” race announcer Lynn Kanuka – Olympian.

Rotich, a newly minted American citizen from Kenya and Cruz, cruised up the hill and split the long large pack apart during the third lap, creating a race of just two. In the end, Cruz appeared to have taken the win, however, during the final 150m stretch and into the finish chute Rotich dropped the hammer and crossed the finish line at the exact same time as Cruz – he clipped Cruz who landed and rolled, creating a spectacular finish. The Brazilian was given the win. They finished at 32:50 on the clock.

The third-place finisher was Paul Ramirez from Peru.

It was a big win for Cruz who two months prior disappeared into the bush and specifically trained on a course that mimicked the Bear Mountain route. He trained every day on it.

“I don’t know where he went, but he was in the bush training for this race every day.”

The dedication paid off.

The top Canadian was Connor Black who ran a tremendous race within himself, picking off competitors throughout. The U Sport 2018 Cross Country Champion and medallist at the 2019 national cross country championships was pleased with his effort to lead Canada to the podium.

“I am pleased with the result. I felt I ran a fairly smart race. I did and no one could make a move on the hill, so it was about making moves on the few straighter areas that there were. I think I did that well,” said Black.

John Gay of Vancouver a former University of British Columbia Thunderbird (7th) finished second for Canada, while Mitchell Ebene, Jean-Simon Desgagnes and Kieran McDonald all finished within the top-17.

In the women’s race, it was over at half-way, but for spectators, it was exciting to see new Victoria, BC resident Geneviève Lalonde demonstrate great authority over the field. She had a 30-second lead at 6K and she didn’t need to be pushed to continue the torrid pace as she glided through the infamous sand trap on the PGA-certified and Jack Nicklaus-designed golf course.

She appeared to be absolutely unaffected by the hills, but in the end, she breathlessly smiled, “I love that hill.”

Carrie Verdon finished second in what for her was a strong race finishing in 38:09. Third was Peru’s Lizaida Thalia Valdivia at 38:12.

A Peruvian Athletics Federation official said, “We train on the hills and at elevation, we love the hills. We are always at 2,500-3000m of elevation in the Andes.”

Victoria Coates finished as third Canadian at 38:43, while Maria Galea-Bernard was fourth followed by Hannah Woodhouse who had a very good showing for 16th place in the time of 39:54.

Natasha Wodak who was one of the pre-race favourites, having competed in the World Cross Country Championships and owns the national 10,000m record didn’t have the race she wanted – not for her or for her Team Canada. The Vancouver native did finish in fourth, to place well for the team, but she wasn’t happy.

Rauber won the U20, 6K race at the time of 23:12. At just 17, she displayed great fitness, which bodes well for her potentially choosing which university that she would like to attend.

In second place was Sadie Sigfstead of Edmonton who finished 11 seconds back and 13 seconds in front of Jhenifer Melchor of Peru.

Canada won the 33rd annual Can-Am Cross Country Cup. It’s a masters 30-plus race and for the purists who prefer masters to start at age 40, that was the age of the winners. For Canada it was Victoria’s Graham Cocksedge, Campbell River’s Mark Cryderman and Edmonton’s Rob Torrance going 1-2-3 in 18:24, 18:32 and 18:42, respectfully.

The top American was Brett Winegar from Washington State’s Club Northwest who had a strong team showing – their orange singlets could be spotted throughout the course.

For the women, Jen Millar of Victoria took the win, while Lauren King and Andrea Smith representing the Monarchs Athletics Club in Edmonton helped Canada go 1-2-3. They finished the 5K race in the time of 20:34, 21:29 and 21:47, respectively.

SHOESTRINGS: Bill Roe with the USATF, unfortunately, passed away on the trip. He was a dedicated coach at the varsity level and started Club Northwest. He was an advocate for this meet.

For the even distances of 6, 8 and 10K the 2K loop was used, however, for the community, and Can-Am Cup at 5K in distance the first loop was just 1K, but also included the big hill. The committee member responsible for designing the course, 60-plus runner Gary Duncan, he was undeterred, having worked 12-13 hour days with shovels and rakes and wheelbarrows leading up, he raced the opening event, the Community 5K, as well as the Can-Am Masters Cup race, to end the day. Then he got busy with the teardown of the equipment.

More to come on the Pan Am Cross Country Cup including images, video interviews, and more stories.