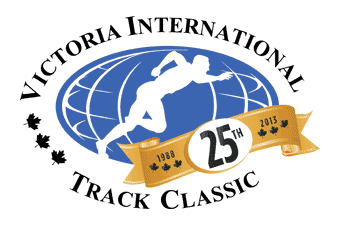 VICTORIA – The 25th Annual Victoria International Track Classic will be held on July 5th at UVic’s Centennial Stadium with $100,000 on the line for competing athletes. This year’s event is the Finale for the National Track League Series, a series of five events across Canada, where athletes compete for points based on their performances on all five competitions.

“We are excited and thrilled to be the host for this year’s Finale of the National Track League Series,” said Keith Butler, Meet Director. “This event will feature the best track and field athletes in the country such as Dylan Armstrong, 4th place finisher at the 2012 Olympics in London and Victoria’s favourite and Olympian, Diane Cummins in the 800 meters.”

The National Track League Series gets underway this weekend in Halifax on June 9th and continues with Toronto June 11th, Edmonton June 29th, Vancouver July 1st and the final event in Victoria on July 5th. A total of $360,000 is on the line for the athletes during the Series of which 50 are Olympians.

The Victoria International Running Society hosts the Victoria event as well as the popular TC10K. “The Society has a role to promote running throughout Victoria from joggers to our elite athletes,” said Brent Fougner, the Society’s President. “The Track Classic is a great way to unite our running community in a celebration of excellence and a night of fun entertainment for the whole family.”

The Victoria International Track Classic is an opportunity to support our Canadian athletes in their pursuit to qualify for the 2013 World Championships in Moscow, Russia, August 10-18.

A Facebook and Mobile Sweepstakes contest has been launched to promote the Victoria Track Classic and engage the community. Prizes include Timex watches designed to commemorate the 25th anniversary, Nike equipment, Vikes Athletic gear, Highlander tickets and free family passes to the event. To access the contest visit the Facebook page at 2013 Victoria International Track Classic.

Tickets for the Victoria International Track Classic are available through Victoria’s Running Room stores or on-line at www.trackclassic.ca.