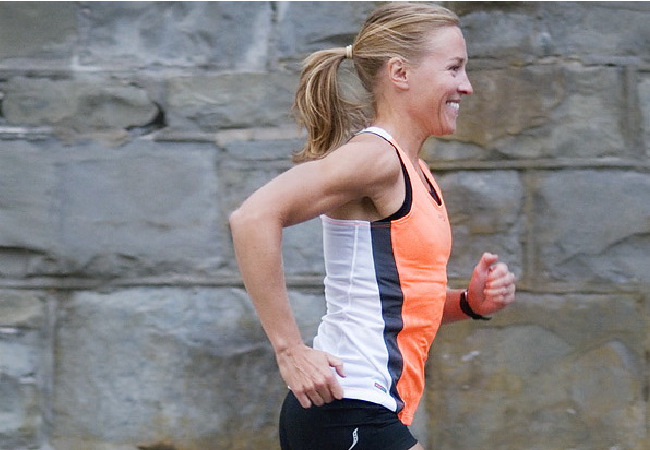 Marilyn Arsenault of Victoria, BC is well into her comeback from a debilitating infection that curtailed her training for over a year. Not only is she back training seriously, she is a busy coach and operates a business (Mindful Strides) teaching runners of all abilities how to run with better form. Arsenault competes in the masters age category.

As a master she broke the open record for the 2009 Goodlife Fitness Victoria Half Marathon by finishing in 1:15:39, competed for Canada at the IAAF World Cross Country Championships in Amman, Jordan, and at the age of 41 competed for the University of Victoria Vikes. She also won the masters race at the prestigious Carlsbad 5000. She is also an opera singer, a Soprano, who studied at McGill University and le Universitie de Montreal in Montreal, Quebec. Arsenault uses her form expertise for her singing as much as she does for her running.

Christopher Kelsall: You have an entertaining story from when you discovered the Alexander Method. You had to painstakingly re-train yourself and your form from scratch. Can you tell me about that?

Marilyn Arsenault: I was introduced to the Alexander Method while attending McGill University. I was doing an undergraduate degree in Voice Performance. The Method is very well respected amongst musicians as way to learn proper posture. And it supports the technical demands of learning how to play an instrument or sing. When I started to learn running technique using the AM, I was only allowed to run for about 10 seconds at a time; I would automatically resort to my old habits so was told to stop before I messed things up. Eventually the running bouts got longer and longer as I was able to hold the form for longer periods and eventually I was running faster than my teacher! Read more.