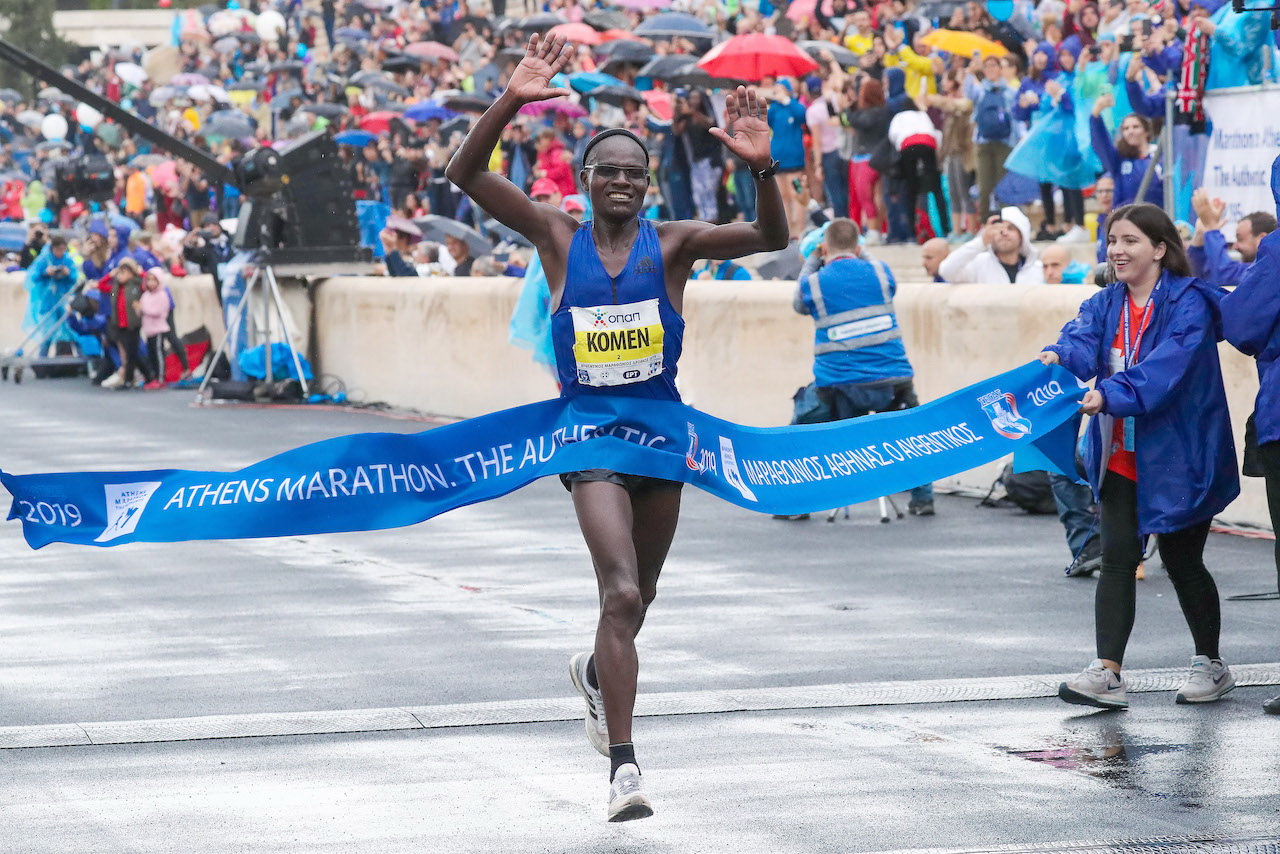 At the age of 42 Kenyan John Komen came through to upset the favourites and win the Athens Marathon in the time of 2:16:34. The masters runner was well behind the leaders with 10k to go but on the demanding, original marathon course from Marathon to Athens Komen managed to pass fellow-Kenyan Daniel Muteti and then Felicien Muhitira of Rwanda in the closing stages before the finish in the Panathenaic Stadium. Muhitira was second in 2:16:43 while Muteti dropped back to fourth in 2:21:39. Greece’s Konstantinos Gkelaouzos came through to snatch third place in 2:19:02. Khamis Bakari of Morocco finished fifth with 2:23:36.

Greece’s Eleftheria Petroulaki provided the home fans in the stadium with plenty to cheer in winning the women’s title in this historic race. Taking an early lead, she finished with 2:45:50 in mixed weather conditions including some heavy rain showers and warm temperatures.

Italy’s Olympic Marathon Champion Stefano Baldini returned to run the Athens course for the first time since his gold medal-winning performance in 2004. The 48-year-old clocked a fine 2:57:07 to finish 98th in the overall results. “I was a little bit scared at the start because 42.195 km is a long way for me since I run no more than 30km in training. I was focused on the second part of the race, not to watch the clock but to run it relaxed, enjoy the course – the last 10k – because my last 10k in 2004 was absolutely marvellous for me,” reflected Baldini.

In the men’s race it soon became clear that the day was not going to be about the top African runners aiming for the course record but on victory above all in this prestigious and historic race with a course practically identical to the route of the first Olympic Marathon of the modern era in 1896. A group of five men went through 10km in 31:23 which pointed to a finishing time of around 2:12:30 while the course record stands at 2:10:37. After Khamis Bakari had dropped off the pace, the Kenyans Daniel Muteti, Rhonzas Kilimo and John Komen along with Felicien Muhitira of Rwanda passed halfway in 67:46.

On the tough uphill section of about 20 kilometres the marathon debutant Rhonzas Kilimo was the first to lose contact with the leading group and dropped out soon after. Next to drop behind was another Kenyan, John Komen. At 30 km he was almost 30 seconds behind his compatriot Muteti and Rwanda’s Muhitira. The latter, who finished 22nd in the World Championship marathon in Doha only a month ago, appeared to be on course for victory when he broke away from Muteti on the last 10 km, a gradual descent into Athens.

John Komen first overtook the struggling Muteti but still trailed Muhitira by 15 seconds at 40 Kilometres. But the Rwandan couldn’t maintain his tempo and Komen, fourth in Athens two years ago, ran on to achieve the most important marathon victory of his career so far. “It means a lot to win such a race in a place with such historic meaning, I’m very happy. I learned from my first time in Athens that the first part of the course is a bit difficult and the second part is a bit easier, so I had to conserve myself in the first place,” explained John Komen. “When I was in third place, I realised that the two guys in front might slow down so I stayed third. I wasn’t worried. I wasn’t sure I would win because my training has not always been consistent.”

The women’s race proved in contrast to the men’s. Only Stefania Leontiadou could keep the favourite and fellow Greek Eleftheria Petroulaki company over the early kilometres. By 10 km Petroulaki had a lead of 19 seconds, timed at 39:33 for the split by the 27-year-old. Going through halfway in 1:23:33, Petroulaki, third in Athens a year ago and with a personal best of 2:44:01 from Rotterdam this year, increased the pace over the second half. Without international rivals, she ran unchallenged to victory: “It was one of the most difficult races of my life. I want to thank all the spectators along the course who did so much to help,” said Eleftheria Petroulaki.

A record number of 20,000 runners entered the 37th edition of the ‘Athens Marathon. The Authentic’. Adding other running events staged on Saturday and Sunday the total number for the event was an impressive figure of 60,000 athletes. 20,000 of them participated in the 10k race held during sunset on Saturday evening. For the first time this event was moved from Sunday to the eve of the marathon race. George Tassis was the winner, finishing after 31:50 in the Panathenaic Stadium. Fellow-Greek Gloria Priviletzio took the women’s title in 35:59.

Further information can be found online at:  www.athensauthenticmarathon.gr