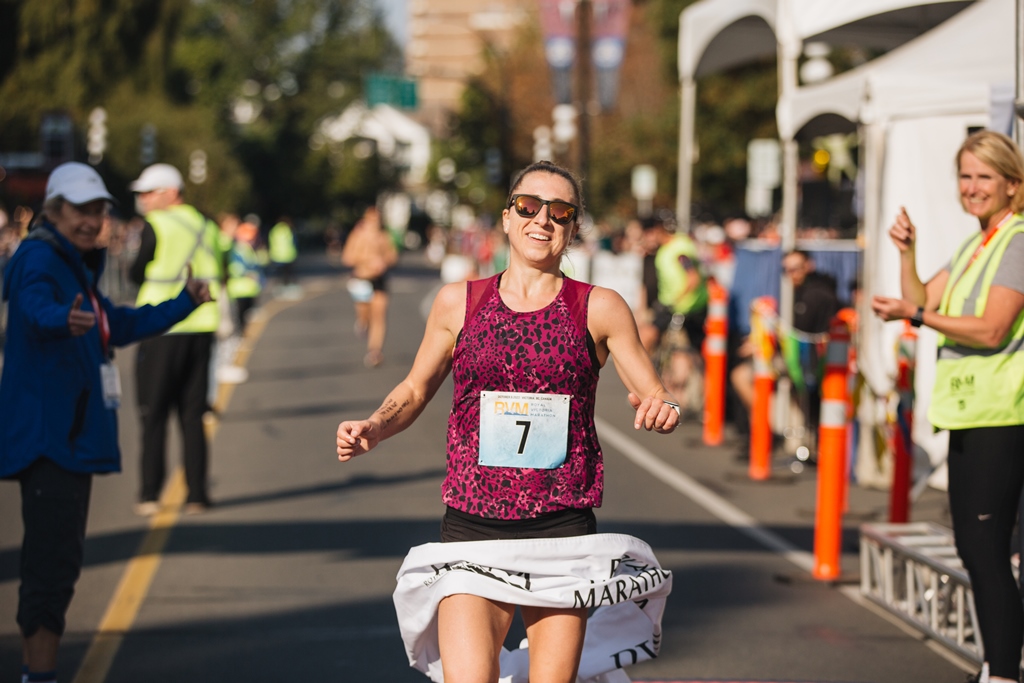 Warmer than usual conditions greeted nearly 8,000 at the Royal Victoria Marathon on Sunday, which also includes the half-marathon and 8K distance events.

Teferi Kebede Balcha and Rozlyn Boutin won the men’s and women’s marathon, Andrew Russell and Sally Crowther triumphed in the half marathon and Thomas Broatch and Courtney Brohart won the 8K race.

The marathon distance had not been held since celebrating its 40th year in 2019. Balcha, from Ethiopia who now lives and trains in Victoria under coach, two-time Olympian Bruce Deacon, easily won in 2:25:26 — Deacon himself won the event in 2004. Balcha finished over three minutes ahead of second-place finisher Aidan Anderson from North Vancouver who clocked a 2:29:55 performance. Finishing in third was senior policy analyst with the provincial government Jonathan Walker with a time of 2:33:46. Balcha, who was also top master (40-plus), won the TC10K in April. He trains with the Prairie Inn Harriers and looks forward to continuing to race as a master.

It was a Vancouver triple in the women’s race with Boutin, an overworked family physician, who fits in 100K of training per week, finishing first in 2:46:49, Kat Drew second in 2:49:26, and 2019 champion, Andrea Lee, hitting the tape in 2:51:04. Lee hails from the same small town of Black Creek as Canadian record holder Cameron Levins. Megan Lyle from Seattle was the top female master finishing 10th in 3:08:42.

“It was hot and I would have preferred cooler temperatures but I was pleased with my result,” Boutin said. “Andrea was in the lead until halfway then I was able to pass her.” Drew then closed the gap between her and Lee and secured second place.

The half marathon was won by Victoria’s Andrew Russell who is also a master. Russell is a former triathlete who enjoys the rugged island life, cycling, and running trail ultras. He broke the tape in 1:11:10 with Greg Ord — a former Calgary Dinos athlete — from Cochrane, Alberta was second in 1:11:56 and Jeff Vogt from Kelowna third in 1:13:10. Russell said his win was perfect, reaching his race goal. He had discussed his race strategy with marathon winner Balcha at the start line. “I ran with Teferi until the turnaround at 13K,” he said. “It got harder on my own but the crowds were great, particularly in Fairfield.”

For Crowther, this was her third half marathon and she was hoping for a faster time. “I felt good overall, I was relaxed and there was no wind but it was warm.” A track specialist with the USTAF, she says she is “still feeling her way with the half marathon distance.” But she plans on running her first marathon, the Californian International Marathon, in December which takes place in Sacramento. The CIM is often used as a pre-USATF marathon trials — a quick, point-to-point net downhill course.

The 8K was the first race of the day and the 23:14 course record looked as though it was going to be broken but Broatch, from Vancouver was just seconds over finishing in 23:42. Second was Christian Gravel, a former UBC Thunderbird also from Vancouver, hitting the tape in 24:37 and third was Victoria’s Jonathan Toombs with a 24:41 finish. The top master was Victoria’s Nicholas Bradley (30:39).

For full results go to: https://www.runvictoriamarathon.com/results/