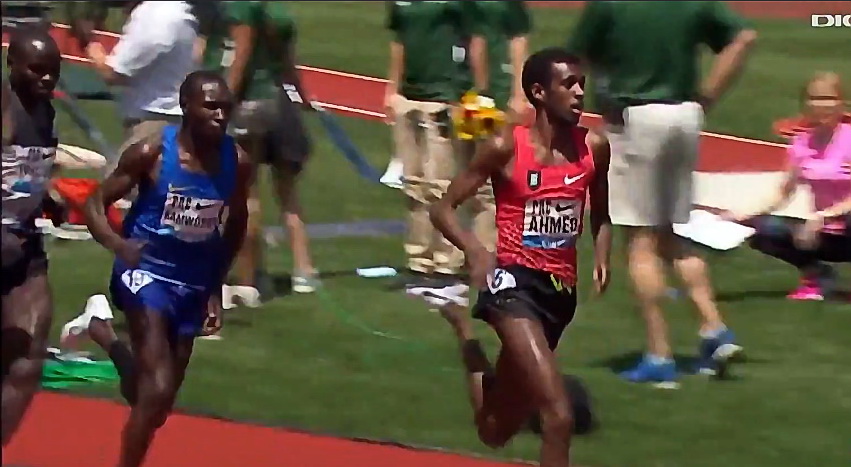 Out for a casual late morning run in suburban Saanich (Victoria, British Columbia), I happened upon Mo Ahmed who was returning from what may have been the easiest run of his life. So, I ran with him for two or three kilometres to his finish point.

He hadn’t gotten around to replying to my email message yet, where I had asked him about his new Canadian record, so he spent the first kilometre apologizing; so Canadian. I had to stop him or we wouldn’t have had enough time to get to the national record discussion.

Ahmed is originally from St. Catharines, Ontario, but now lives in Portland, Oregon, because he is on the Bowerman Track Club team at Nike.

There are more trees and trails than people; heaven for a runner.

He is not old enough to know of Donny and Marie Osmond, so I laughed.

Ahmed was in town to see physiologist Trent Stellingwerff at CSI Pacific for the usual testing that Canada’s elite athletes go through during their career.

He not only ran a new personal best in the 5,000m distance two weeks prior in the Rome Diamond League meet, but he also bettered his own national record and eclipsed the 13-minute benchmark for the first time in his career with a 12:58.16 performance. His previous national record was 13:01.78.

“There are so few opportunities to take a run at a time like that,” he said. “Being fit, having the right people in the race, and then running it smart – that scenario doesn’t present itself all that often.”

So he went after it in Rome and once he bettered “13”, he suddenly discovered that being a 13-something-guy had weighed on him for three years. He set the record back in May of 2016 in Eugene. He came close again in Brussels last August with a 13:03.08.

“I didn’t think it bothered me or weighed on me at all until after I ran Rome, then I felt a sense of freedom and felt lighter,” he said.

All of his direct competitors, most athletes that he knows and sees around the Diamond League and international competitions had all run in the 12s last year.

In Eugene 2016, he ran at the back of the pack for about nine laps of the 12.5-lap race, and then he worked his way to the front. At the bell, he took off and gapped the rest of the field. Ahmed held the lead until there was about 80m remaining and then the proverbial piano-on-the-back arrived and he subsequently dropped to third. The winner Muktar Edris of Ethiopia finished in 12:59.43. He and Kenyan Geoffrey Kamworor battled to the finish hard. Kamworor recorded a 12:59.98 result.

The Ethiopians and Kenyans are bitter rivals, even if the piano hadn’t arrived, it would have been tough to beat those two.

“In that race, I blew up over the final 200,” he said with a hint of both malice and mirth, scoffing.

Not at Rome though. In the Rome race, he put himself at the back of the lead pack and stayed right there not draining himself during the final lap, just running with those Nike heels coming up to his butt at 2:36 per-kilometre pace, give or take a little.

“You know, Justyn Knight had a good race too. It was good to see him get a new pb at the distance,” added Ahmed.

I asked Ahmed if he attended the Pacific Distance Carnival in Vancouver, he said “no” and began to describe the troubles he and American steeplechaser Evan Jager were having on the ferry from Vancouver to Nanaimo, trying to get a wifi signal. They were trying to catch the Toronto Raptors – Golden State Warriors final game of the NBA playoffs. They watched the game with typical fits and starts that torture passengers when the connection isn’t so hot, which is always the case. The sign that reads “free wifi” should read: “free from wifi.”

“Knight must have been losing his mind during that final game,” I said.

He is from Toronto.

“Yes, he would have been going crazy; we were losing our minds too”, he said laughing. “It was amazing”.

Back to the 13-minute benchmark, we discussed the opportunities and the likelihood of doing it in 2016.

“Yeah, I didn’t think it was a mental barrier, but maybe it was,” he said as we ran along at 5:00/km pace. “But I do feel a sense of lightness after doing it.”

He will be racing the two-mile at Cobb Track at Stanford University in California at the Prefontaine Classic on June 30th.

The field will be stacked with many of the top 5,000m competitors, including fellow Canadian Knight. Being a Diamond League meet, the race will offer a deep field.

If it is difficult to find the right situation for the fastest-possible 5,000m race, the two-mile, a rare event, would be darn near impossible to get into the right circumstances to race one’s best. And perhaps because there are no global championships to offer the two-mile, its significance is known mostly to the athlete who runs it and perhaps to the most ardent track fan. Time aside, it will likely be a thrilling race. Two miles is 3,218m metrically-speaking.

Ahmed will end his summer in Doha, Qatar at the 2019 IAAF World Track and Field Championships. The 2012 and 2016 Olympian finished heartbreakingly close to a medal during the Rio Olympic final in the 5,000m. He finished fourth in the time of 13:05.94. He won two silvers during the Gold Coast Commonwealth Games in April 2018 and is a five-time national track champion.

Perhaps after Doha, he will experience an incredible lightness of being; only time will tell. Worlds start on September 27; the Diamond League travels the globe during the summer.