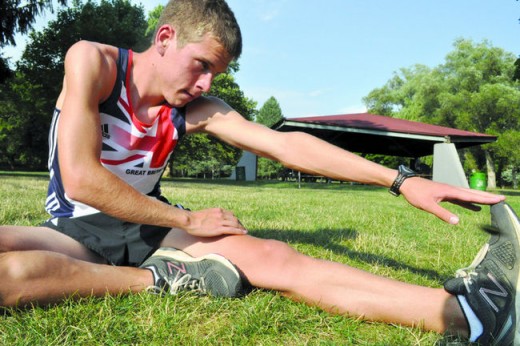 Twenty-year-old Aaron Hendrix of Parkhill, Ontario (near London) attends the University of Guelph, the number one varsity athletics team in 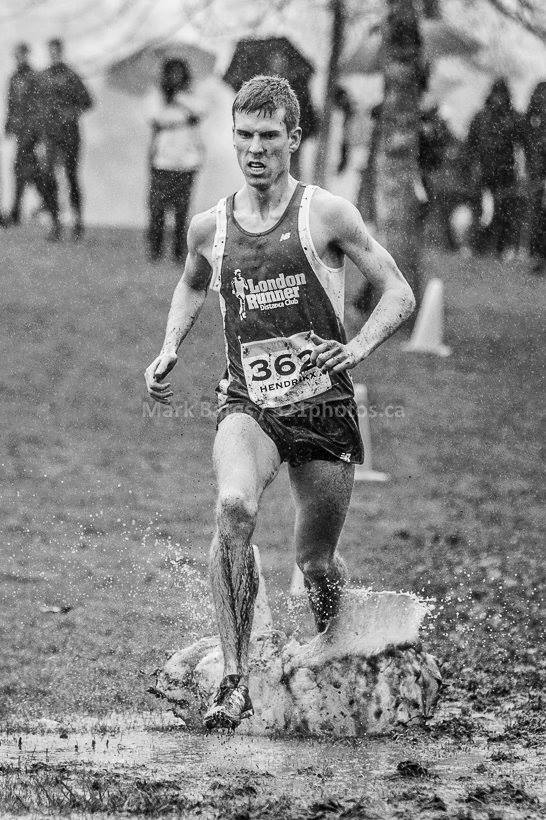 Canada (CIS). The Gryphon women are also ranked first and both teams are 2013 national CIS cross-country champions. The men have won eight-consecutive championships, while the women have won nine.

Hendrix led his team to victory, by winning the championships, himself. He then followed up that win with a third place finish at the Canadian Cross Country Championships, where he represented his club, the London Runner Distance Club. He finished third to winner Luc Bruchet and second-place finisher Chris Winter, both living and training in Vancouver, BC.

Christopher Kelsall: Did finishing third at the 2013 Canadian Cross Country Championships meet with your expectations?

Aaron Hendrix: To a certain extent finishing third met my expectations. Going into the race I didn’t see any reason why I shouldn’t be challenging for the win. I feel like I put up a good fight for the win and made the other guys have to work for it.

CK: Was Coach Dave Scott-Thomas’s plan for you to go for it?

AH: I didn’t really discuss race tactics very much with Dave. I went to the Canadian Championships with the London Runner Distance Club and discussed race tactics more with coach Steve Weiler. The plan was pretty simple though, I had a good idea of how I was going to play the race going into it.

CK: Was that to simply run with the leaders to put the fear of god into them?

AH: Pretty much, I wanted to run with the front pack and feel it out up there for a while.

CK: Did the muddy conditions suit you?

AH: In the past, I haven’t been much of a mudder, but that seemed to change this year. I think this year I got stronger and was able to handle the muddier conditions better. Typically I would say the muddy conditions aren’t my forte, but after having some fun in the mud at OUA’s and at the Canadian Championships I’m a little more inclined to say muddy conditions suit me.

CK: How about the CIS championships this year. There was no doubt Guelph was going to win but were you happy with your efforts?

AH: I am very happy with my effort at CIS. CIS was my goal race for the cross-country season and my goal individually was to win. I knew going into the race that I was strong and ready to push from the start. I’m very happy to have won the individual title and that Guelph came away with both the men’s and women’s team titles.

CK: Can you take me through the race at nationals in Vancouver?

AH: At the start of the race I wanted to get up to the front and feel it out and that’s what I did. I tucked in behind Luc Bruchet and Kelly Wiebe (Wiebe dropped out due to injury) for the first two-kilometre loop and then stayed in the top four or five for the second loop. After the first two loops Luc got a bit of a gap on myself and Chris Winter. I spent a majority of the rest of the race working with Chris and trying to minimize the gap between us and Luc. Chris caught Luc going into the last two km loop and I was nearly there, with just over a kilometre to go I had almost caught the two leaders but then Luc started taking off again. I battled with Chris in the last kilometre but Chris had the better finish. The race was more of grinding race for me compared to other races this season.

CK: What do you mean by “grinding”?

AH: Getting into the uncomfortable zone a little earlier on in the race than expected but not breaking.

CK: Your track performances from 800-metre to the 10,000 metre all seem to be at the same performance level, give or take a little here and there. Have you settled on a distance to specialise in going-forward?

AH: Throughout high school my focus was on the 1500-metre and the 3000-metres, but I always enjoyed the 3000-metre distance and cross-country a little more than the shorter distances. Going forward my focus is on the 5000-metre event, I will certainly get into some 1500-metre races as well. Perhaps a little way down the road I’ll give a real go at the 10,000-metre.

CK: Will you be looking for the 2014 Glasgow Commonwealth Games standard this spring?

AH: To be honest I am not yet familiar as to what the Commonwealth Games standards are or exactly how the team is selected. Right now I’m really just looking for some solid improvements in the 5000m and 1500m distances.

CK: Perhaps 13:20 and 13:15 for the 5000-metre standards, based on the World championships standards. So do you have specific time goals for those two distances?

AH: I do have some specific goals in mind for both distances. I’ll be aiming to take a good chunk out of my 5000 metre personal best this coming summer.

CK: What are your goals for indoors?

AH: My goal for this indoor season is really to stay healthy. I dealt with some injury issues the last couple winters and I want to avoid that this winter. If everything goes smoothly I’d like to get after a sub eight minute 3000m.

CK: Is it racing indoors that causes the injuries?

AH: It’s hard to know really the cause of my injuries the last couple winters. I think I received the injuries before I did much work on the indoor track so I can’t really place the blame on indoors. Last year I was talking to my physiotherapist about reasons for why my back and hips were a bit twisted. She suggested it could have been from studying and sitting so much with potentially bad posture. Thus, I blame my injury last year on studying too much.

CK: Logically. How were your grades?

AH: They were pretty good after that semester, the studying certainly helped.

CK: So not all was wasted. By December 4th, Emily Yungblut ate 50% of your advent calendar on you. Are you tolerating this? And if not, what will the retribution look like?

AH: This is actually hilarious. I woke up back in Guelph after getting home from Vancouver on December 2nd and remembered the advent calendar. I went to get the first two days of chocolate out and both days were gone! It’s no fun waking up expecting some morning chocolate only to realise the chocolate you thought would be there is not. Unfortunately, I must tolerate this because her sister did buy the advent calendar for both of us. I wouldn’t be surprised if Emily’s sister actually just bought the calendar for Emily. So, I can deal with just 50% of the chocolate.

AH: My Christmas holidays are usually filled with quite a bit of chocolate so I know there is a lot more chocolate to come. Chocolate that is probably better than what comes out of an advent calendar.