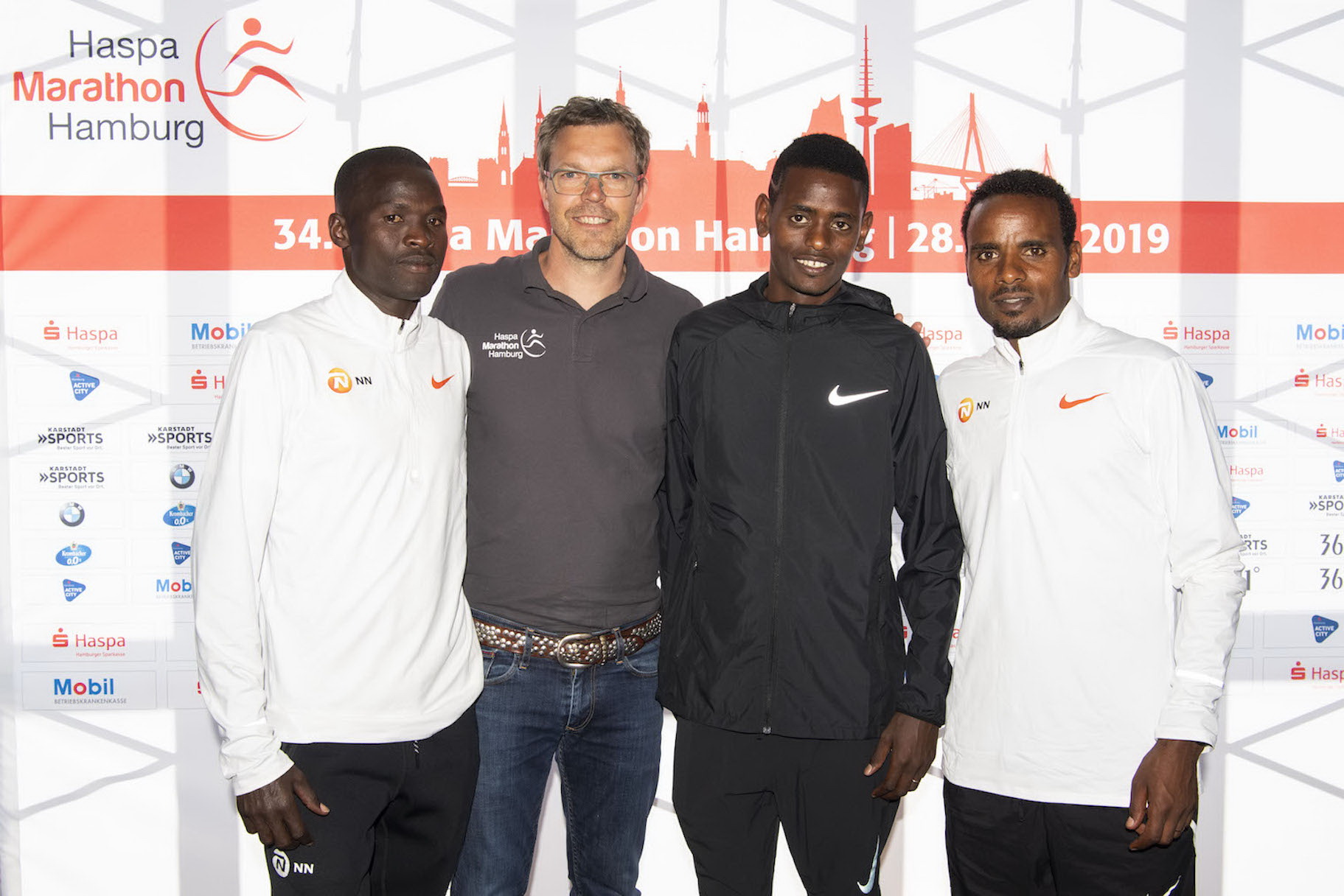 Former double World Marathon Champion Abel Kirui intends to break Eliud Kipchoge’s course record in Sunday’s Haspa Marathon Hamburg. The current world record holder clocked 2:05:30 in his debut marathon here back in 2013. Kirui also wants to break 2:05 for the first time in his career. With a personal best of 2:05:04 the Kenyan is the second fastest runner on the start list behind Ethiopia’s Ayele Abshero, who features a personal record of 2:04:23. In an extraordinary deep men’s field, 16 athletes have already broken 2:10. There are five women who have run sub 2:25. Mexiko’s Madai Perez and Dibabe Kuma of Ethiopia head the entry list with personal records of 2:22:59 and 2:23:34 respectively. Jessica Augusto of Purtugal, who won the race two years ago, returns to Hamburg. A very strong group of Japanese elite runners will be in contention as well.

Organisers expect a total of around 35,000 athletes to compete in the Haspa Marathon Hamburg. This includes races at shorter distances staged parallel to the marathon. Almost 14,000 have entered the classic distance of Germany’s biggest and fastest spring marathon.

No one has come close to Eliud Kipchoge’s course record since the Kenyan ran 2:05:30 six years ago. But Abel Kirui is confident that he can change this. Asked about his goals for Sunday he answered: „My ambition is to break the record.“ Actually, by mistake Kirui said „world record“ instead of „course record“, but of course he did not mean to attack Kipchoge’s 2:01:39 time from Berlin last year. „Everything was going well and I know that the course is a flat one. So if the weather is cool then I will go for a fast race,“ said the 36 year-old, who won the World Championships’ marathons in 2009 and 2011. Additionally, he won the silver medal in the London Olympic marathon in 2012. „I hope to go through halfway in 62:30 and then run the second half a bit faster to finish sub 2:05,“ explained Kirui, who ran 2:07:07 in very warm conditions in London a year ago.

Two Ethiopians who placed second and third at the Haspa Marathon Hamburg last year return to the race: Ayele Abshero is the fastest runner on the start list with a personal best of 2:04:23. The 28-year-old ran his best time for four years last year in Hamburg, when he clocked 2:07:19 for third place. “Winning this race would be great. But the field is a very strong one. I would be happy if I could finish in the top three. I will go with the first group,“ said Abshero. Tadu Abate was the runner-up in 2018 with 2:06:54 as a debutant, crossing the line just 20 seconds behind fellow-Ethiopian Solomon Deksisa. „My training went well, I had no problems and I am in fine form,“ said 21-year-old Abate.

There are two Olympic Champions in Sunday’s race. For the third time in a row Stephen Kiprotich of Uganda will compete in the Haspa Marathon Hamburg. The marathon gold medallist from London 2012 was second here in 2017 and fifth last year with 2:07:31 and 2:07:57 respectively. It will be interesting to see if Ezekiel Kemboi can have an impact in the marathon. The 36-year-old Kenyan won two Olympic titles (2004 and 2012) and four World Championship gold medals in a row (2009 to 2015) in the steeplechase.

With a total of 16 runners who feature personal bests of sub 2:16 and another seven who have run under 2:12 the Haspa Marathon Hamburg has a depth few other marathons can match.

Two years ago Jessica Augusto celebrated one of her biggest career victories in Hamburg, when she took the race in 2:25:30 despite very tough weather conditions including hail showers. “If you have been successful then you are happy to come back to that race,“ said Jessica Augusto, who suffered from a career-threatening tibia bone head injury in 2018. “I did not opt for surgery and the conservative treatment did work. Since December I am able to train normally again,“ explained Jessica Augusto, who targets at least a podium place on Sunday. Regarding times she wants to make an early statement regarding Olympic qualification. “While the international qualifying time is 2:29:30 I will need to run considerably faster to be selected because there are six of us who compete for three places. I hope to run around 2:25 on Sunday,“ said Augusto.

Jessica Augusto is the fourth fastest on the start list behind Madai Perez of Mexico (2:22:59), Ethiopia’s Dibabe Kuma (2:23:34) and Mao Kiyota from Japan (2:23:47). Unfortunately, world half marathon Joyciline Jepkosgei cancelled her start in Hamburg. The  Kenyan felt not ready yet for her marathon debut.

Fellow Kenyan Jackline Chepngeno could produce a surprise on Sunday. The 26-year-old moved up to the marathon distance last year and clocked a personal best of 2:24:38 in Amsterdam, where she finished sixth. “I want to break my personal best in Hamburg and compete well,“ said Chepngeno.

More information about the Haspa Marathon Hamburg is available online at: www.haspa-marathon-hamburg.de