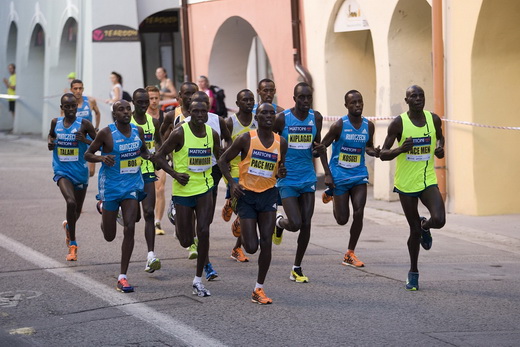 The Mattoni Ceske Budejovice Half Marathon came into existence in resounding style with its debut race in 2012 as Daniel Chebii won with a world class performance of 59:49. When the fourth edition of this race in the RunCzech Running League gets underway on Saturday evening, at least one athlete is a strong contender to break Chebii’s event record and that is his fellow Kenyan Abraham Cheroben. His opposition will include the Ethiopian Ayele Abshero, also a sub-60 minute performer. The women’s favourite should be Rose Chelimo of Kenya. The Mattoni Ceske Budejovice Half Marathon is an IAAF Silver Label Road Race and live stream coverage will be shown from 1845 CET on www.runczech.com.

The historic town in southern Bohemia will form a picturesque backdrop to a race where seven men will line up with personal bests of under 61 minutes. Abraham Cheroben is the fastest by a considerable margin. The 22-year-old ran the fastest half marathon in the world last year to win the Valencia title in 58:48. His recent form is also impressive, winning the Berlin 25 km for the second consecutive year, running 1:12:31 despite strong headwinds. At the end of March he finished third in the city’s half marathon with 59:49, delivering a strong message that he could attack the event record in Ceske Budejovice.

Cheroben was eager to explore the town in an early morning run on Friday, although his run was extended to 15 km when he lost his bearings briefly before a police motorcyclist set him back on course. Abraham Cheroben later reflected on the tough background which has been the foundation of his rise and his hopes for further running success in his family: “I am training in a camp in Eldoret and life there is hard but it means you can win when you train like that. In my family I have three brothers and four sisters. One of my sisters is still in school, she is only little but likes to run and I encourage her.”

His rival Ayele Abshero will be contesting his first race of the year on his return from injury but the Ethiopian has an impressive pedigree in his brief career so far: he won the Dubai Marathon in 2:04:23 on his debut at the distance in 2012 and his best for the half marathon is 59:42. Others to be reckoned with should be Abera Kuma of Ethiopia (60:19) and the Kenyans Benjamin Ngandu (60:20), Thomas Lokomwa (60:33), Bernard Bett (60:42) and Festus Talam (60:57).

Rose Chelimo is in prime form at the half marathon this year, winning all her three races including the perennially competitive Lisbon event at the end of March with a personal best of 68:22. Such displays should put the current race record of 70:54, set by the Ethiopian Tadelech Bekele, under extreme pressure.

But Chelimo will have to reckon with two rivals who have also broken 70 minutes for the distance: her fellow Kenyan Viola Jelagat (69:27) and the Ethiopian Letebrhan Haylay (69:45), the latter having already set a personal best this year to finish third in the Prague Marathon on May 3.

For Britain’s Susan Partridge the race continues her return to competitive form after taking a break following sixth place in last year’s Commonwealth Games marathon. Her best for the distance is 70:32 and Saturday’s race is a stepping stone towards Rio de Janeiro next year: “The Olympics are the one major championship I haven’t run so every race is aimed at building towards the qualifying time for the marathon.”

With Abraham Cheroben and Susan Partridge among the elite who will be pursuing their goals, they and the mass runners should beware the legend of the one stone in the town’s square: the story goes that anyone who stands on it, instantly forgets where they are.

Further information about the Mattoni Ceske Budejovice Half Marathon can be found online: www.runczech.com