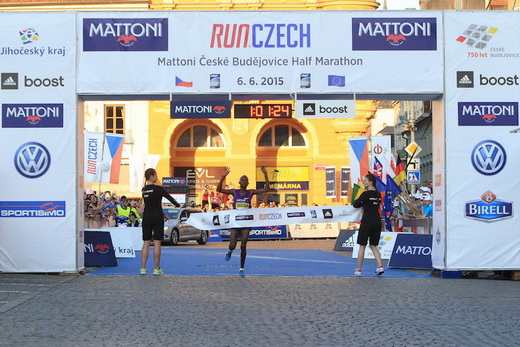 Abraham Cheroben and Rose Chelimo produced dominant performances to win the top honours at the Mattoni Ceske Budejovice Half Marathon in the Czech Republic on Saturday. Cheroben, the fifth fastest of all time at the distance, won in 61:24 while Rose Chelimo maintained her impressive form by winning her fourth half marathon of the year in 72:01. The times did not threaten the event records but with the temperature showing 27 degrees Celsius for the 7pm start, even runners of their quality admitted the conditions were tough. The Mattoni Ceske Budejovice Half Marathon is an IAAF Silver Label race and forms part of the Run Czech Running League.

Abraham Cheroben didn’t appear to be the smoothest runner in the lead pack which went through 5 km in 14:36, but his quality emerged when he was part of a quartet which reached 10 km in 29:19. His fellow Kenyan Cheshari Jacob was pushing the pace while the Ethiopian Abera Kuma, winner of the Rotterdam Marathon eight weeks ago, was moving smoothly alongside Benjamin Ngandu.

Increasing the tempo, Cheroben went clear and by 15 km, reached in 43:40, he was half a minute clear of Ngandu with Kuma almost a minute behind. Increasing his advantage as he headed for the finish in King Ottakar Square, Cheroben put over a minute and a half between himself and the runner-up, Benjamin Ngandu. Abera Kuma slowed on the closing stages to finish third.

Abraham Cheroben chooses his words carefully and gave a succinct view of his victory and the warm conditions: “Yes, it was very hard but when I broke away I was confident I would win.”

Making his first competitive appearance of the year after injury, Ethiopia’s marathon specialist Ayele Abshero made a steady return to finish sixth in 66:10, moving up the field towards the end.

Rose Chelimo had set herself a tough challenge over the half marathon distance in the first half of the year and passed with distinction, achieving her fourth win of 2015 with a commanding performance in the women’s race. She 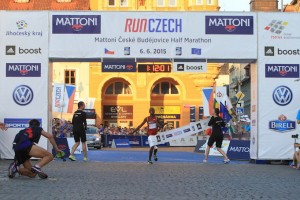 was running clear from 5 km, extending her lead over her fellow Kenyan Viola Jelagat to over two minutes by the finish. Chelimo had added to her reputation with victory in the Lisbon Half Marathon in late March. As the temperature climbed the prospect of improving on that personal best of 68:22 evaporated but she confirmed her resilience: “It was tough in those conditions, especially running solo from early on. After winning four half marathons, I shall take a rest for a couple of weeks. My aim is build towards the marathon and run my debut next year.”