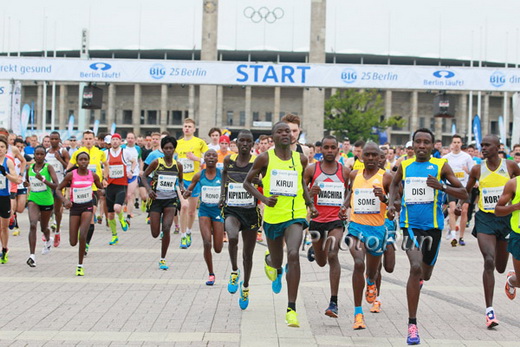 Another major Berlin road race renowned for its super fast times will be started this Sunday: The BIG 25 Berlin is the event which helds the two current 25 k world records. Dennis Kimetto ran 1:11:18 in 2012 while fellow-Kenyan Mary Keitany clocked 1:19:53 five years ago. While it is unlikely that these records will be under threat on Sunday the men’s race might well be very fast again. Defending champion Abraham Cheroben will return to the BIG 25 Berlin as will last year’s runner-up, fellow-Kenyan Kenneth Kipkemoi. Ethiopia’s Sutume Asefa Kebede and Elizeba Cherono from Kenya are the favourites in the women’s race.

The BIG 25 Berlin will see its 35th edition on Sunday. Back in spring 1981 the event was Germany’s first major city road race and a trendsetter for German road running. Marathon races in Frankfurt and Berlin followed the example of the 25 k and were staged in the city for the first time later in 1981. Organisers of the BIG 25 Berlin have registered more than 11,000 runners for Sunday’s races, which will include a half marathon, a 10 k race and a 5×5 relay event. All races feature the spectacular finish inside the Berlin Olympic Stadium.

A year ago Abraham Cherono clocked a world lead of 1:11:47 to take the BIG 25 Berlin. His result still is the fourth fastest time ever run at this distance. When the 22 year-old Kenyan returns to Berlin he aims to improve his personal best. The current world leading time of 1:13:48 could be improved by quite a margin if weather conditions are favourable. Cheroben was last year’s number one in the world at the half marathon distance as well. He won the Valencia race with 58:48 in October. It will already be his second start in Berlin this spring. Six weeks ago Cheroben was third in the Berlin half marathon. Despite a muscle problem that occurred during the race he clocked a fine time of 59:49.

However there is some tough competition waiting for Cheroben on Sunday. Another duel with Kenneth Kipkemoi is likely. 30 year-old Kipkemoi has twice been second behind Cheroben last year. In the BIG 25 Berlin he clocked a fine 1:12:32 and then Kipkemoi improved to a world-class 59:01 in the Valencia half marathon, again being beaten by Cherono. Kipkemoi remained number two in the world rankings for the half marathon last year with his time from Valencia.

Kenyans Charles Maina and Frederick Ngeny could also do well on Sunday. They have sub 62 minutes’ half marathon PBs of 61:13 and 61:37 respectively. It would be a major surprise if Kenya’s win streak would come to an end in Berlin. Since 2001 the winner of the BIG 25 has alsways been a Kenyan. It is exactly the same in the women’s race. 14 times in a row a Kenyan woman took the BIG 25. However that series is under severe threat on Sunday.

21 year-old Ethiopian newcomer Sutume Asefa Kebede looks capable of putting an end to the Kenyan success story. And she will be eager to add to her own win streak: This year she has won all of her five races in Europe. Among them were wins at 10 k and in the half marathon: She clocked 31:49 in Paderborn (Germany) and then 69:07 in Verbania (Italy) in April.

Sutume Asefa Kebede’s strongest rival is likely to be Elizeba Cherono. The Kenyan was second in the Berlin Half Marathon in March. She clocked 70:56 in that race while her PB stands at 70:15. However there is another Ethiopian who could do well in the BIG 25 Berlin: Zewdnesh Ayele Belachew has a half marathon PB of 71:37.