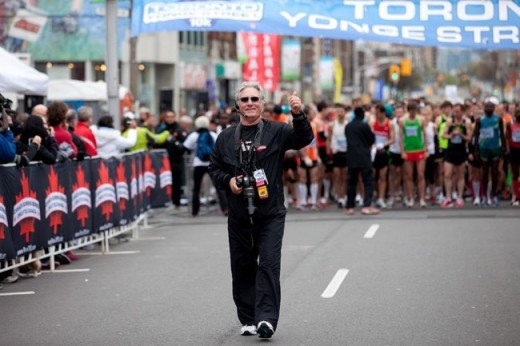 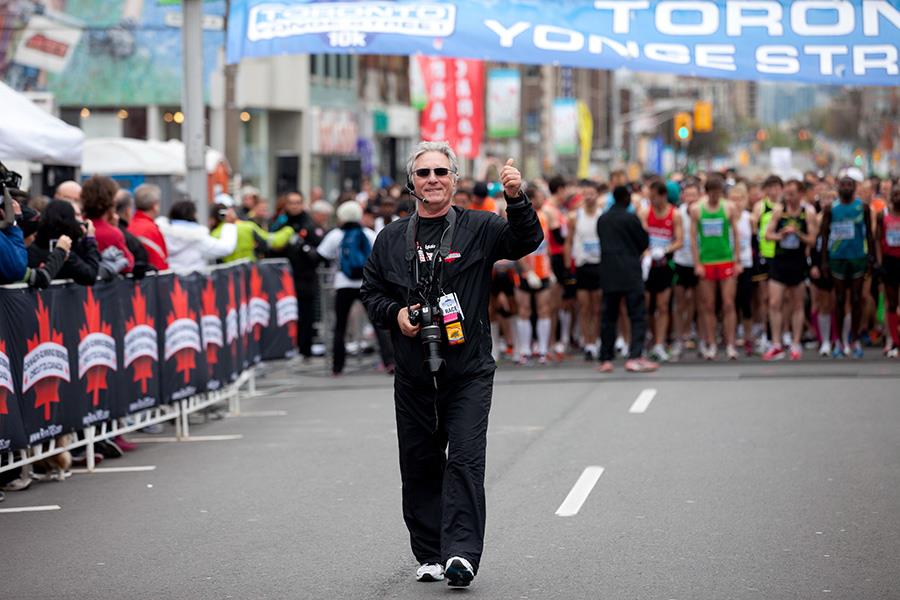 Alan Brookes created the Timex National Road Race Series, and is the director of the Canada Running Series, which finishes its season with Canada’s highest profile marathon.

He spearheaded the original Toronto Marathon and is currently the director of the Scotiabank Toronto Waterfront Marathon. The race takes place on the third week of October each year and offers up a fast course and a strong contingent of elite international athletes. Toronto is one of 29 marathon recognised as a silver label event.

He told Get Out There Magazine, “In the next five years we’d like to take it to 30,000 runners (from 15,000 in 2008), and get to $3 million (from $1.4 million in 2008) raised for local charities,” says Brookes. “And have it recognised, as it increasingly is, but firmly recognised among the highest ranked of international marathons.”

The 2013 event happens Sunday October 20th and he is expecting at least 25,000 participants from 60 countries.

Brookes competed as a runner and owns a personal best time for the marathon of 2 hours and thirty-four minutes.

Christopher Kelsall: It appears that the Scotiabank Toronto Waterfront Marathon once again has a strong, elite field for the 2013 edition. Who are some of the top names?

Alan Brookes: Yes. If we get a decent day, weather-wise, I’m hoping we can take a good run at improving the men’s All-comers record (2:07:58); maybe even the Women’s. We have five guys who have run 2:08 or better in the last 12 months, including our returning champion Betona Sahle Warga plus a 2:05/2:06 guy who we’ll be announcing next week. I think it’s a nice mix of experience and younger, developing talent.

I’m really looking forward to welcoming Abderrahime Bouramdane back to STWM. His 2006 race against Daniel Rono was really the start of big things for STWM, and the start of “M. Dueuxieme Place’s” career that saw him go onto place 2nd at Boston (2008), record strong performances in other WMM races (4th in London 2010 in 2:07:33; also fifth place twice in NYC) and fourth place in Daegu at the 2011 World Championships. And I’m delighted to announce the late addition of Deressa Chimsa to the field. With a 2:05:42 PB and a string of consistent 2:06/2:07 performances, I think he will be the fastest marathoner ever to start a marathon in Canada. He’s run under 2:08 five times in the last three years.

CK: And on the women’s side

AB: On the women’s side, we have four who have run 2:24 or 2:25 already this year, plus three more with recent 2:26/2:27 performances — including Netsanet Achamo Abeyo who went out at that CRAZY pace with Mare Dibaba and Koren Yal here in 2011 (68 minutes at half-way; 1:38 at 30k which is an African record). And watch out for Flomena Cheyech (2:24:37 1st in Vienna in the Spring), Dinknesh Mekash and Salomie Getnet.

CK: Do you think Abeyo – who you say went out at 68 – was hoping for a negative split and a world record or was she just inexperienced? Would you be hoping for more of that this year?

AB: For sure it was inexperience. Now she’s developed more as a marathoner — same speed, more experience! This is a good combination!

CK: Is Kenneth Mungara, the event record holder with his 2:07:57 not racing? If the weather holds can you make bold predictions of both the men’s and women’s top times?

CK: How did you come up with the Course & Canadian All-comers record prize purses? There are different prizes for the men and the women.

AB: The Canadian Record Bonuses were a simple plan, offered up by Scotiabank three years ago: $1,000 for every year the records have stood, cumulative, ‘til someone breaks the current record, then it will go to $25,000. Hope someone claims them soon… maybe October 20th?! 🙂

Both Men’s & Women’s Open Record Bonuses get to $50,000. But after a bunch of internal discussion, we decided that the Men’s was relatively softer than the Women’s so it should bunny-hop more.

CK: Will the CRS achieve its 2013 fundraising goal of topping up from each registrant a twoonie or cinqe to generate $120,000?

AB: In short, “unfortunately no”.  It has taken the foundation a little while to sort out its clear objectives and get a tight focus. I think that was vital before they went out vigorously fundraising. I think that’s in place now. The Scotiabank MarathonKIDS programme has been renamed the Scotiabank MARATHON JR programme and gone “public” on the website. The foundation is developing initiatives to focus tightly on growing this one programme to begin with. We’d like to engage a lot more schools, and build out the programme from just a two month thing, and to involve more of our CRS races, and perhaps some of our star athletes and Canadian heroes. We think it will be helpful for CRS participants to see the kids at CRS events, to connect with them, and see where their donations are going. In the meantime, CRS has been working hard to raise funds for other charities & our 2013 total should clear $5.5 million – a number we’re really proud of.”  http://www.torontowaterfrontmarathon.com/en/smj.htm

CK: This money is going to support running at the grass roots level. Can you explain how that will benefit?

AB: The focus of the CRS Foundation is to promote healthy lifestyles through running, especially for kids. Hence the MARATHON Jr programme.

CK: Back to the athletes, you have a couple of master-age women who will chase some aggressive times.

AB: Yes, Lioudmila Korchaguina is running and going for the masters course record, which is around 2:33.11. The open course record is 2:22:43 set by Koren Yal in 2011. The Canadian record is 2 hours 28 minutes 36 seconds and 28 years later still owned by Sylvia Ruegger. Victoria’s Marilyn Arsenault may be able to break 2:40 as a master!

Keep up on the latest developments with the growing elite field at the marathon website, www.torontowaterfrontmarathon.com.