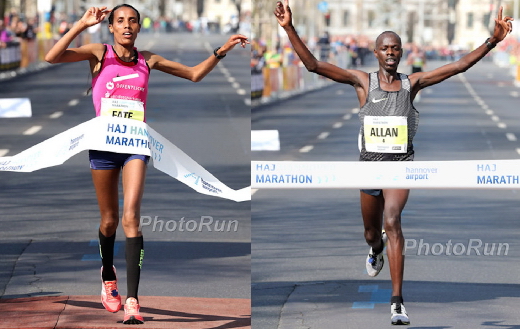 Allan Kiprono and Fate Tola are the winners of the HAJ Hannover Marathon. In what is his biggest career win the Kenyan clocked 2:09:52 in fine but relatively warm weather conditions. Fellow-Kenyan Philip Sanga snatched second place from Norway’s Sondre Moen in the final metres of the race. Both runners were timed with 2:10:07. Moen’s time is a Norwegian record.

While Germany’s marathon record holder Arne Gabius dropped out shortly before the 33 k mark due to an achilles tendon problem Fate Tola produced a German victory. The former Ethiopian ran 2:27:48 and secured selection for the World Championships’ Marathon in London this summer. She was well ahead of Ukraine’s Nataliya Lehonkova and Mulunesh Asefa of Ethiopia, who finished with 2:33:20 and 2:37:27 respectively.

Including shorter races, the 27th HAJ Hannover Marathon had a record entry of 22,200 runners. The event is an IAAF Silver Label Road Race.

A group of nine runners passed the half marathon mark in 65:04, hitting almost exactly the target time of 65 flat. While there were still eight in the lead at 30 k (1:32:33) shortly afterward the group was reduced to five. It was then Philip Sanga, the fastest runner on the start list with a PB of 2:06:07, who took the lead. The group stretched, but Kiprono, Moen, South Africa’s defending champion Lusapho April and Nicholas Kamakya of Kenya managed to catch Sanga. However, Sanga pushed the pace again at around 35 k and this time there was some damage. The Kenyan was in the lead with Kiprono and Moen chasing him while April and Kamakya were out of contention.

With thousands of spectators lining the street in the sunshine a thrilling battle for victory began. First, it was Moen who could not hold on to Kiprono. Then Kiprono caught Sanga and overtook the leader with around four kilometres left. Sanga was also overtaken by Moen before the 40 k mark. But close to the finish Sanga was getting faster again. He could not catch Kiprono, but he just managed to squeeze past Moen before the finish line.

27-year-old Alan Kiprono won his first marathon race in Hannover. „I had spoken to Philip during the race and suggested that we should work together. However, he wanted to do it all alone. When I took the lead I was never sure I would win. I just gave everything,“ said Kiprono, who ran his PB of 2:09:38 in Frankfurt in 2014. „I want to go back to Frankfurt in October and improve to 2:06 or 2:07,“ said Kiprono, who is coached by German Dieter Hogen.

Behind Sanga and Moen Kenya’s Kamakya took fourth place with 2:11:35. Three-time Hannover winner and course record holder Luspaho April (2:08:32) finished fifth with 2:11:41. This should secure selection for the World Championships in London. Ezekiel Ngimba of Tanzania took sixth place with 2:11:55.

“I got stitches and then I had some stomach problems from 33 k on because I drank too much during the race. It was a pity because my legs were fine, but whenever I tried to run faster the stomach problems stopped me,“ said Moen. “It is a pity that I could not break 2:10. However I am very happy about the Norwegian record,” said 26-year-old Moen, who was 19th in the Olympic marathon in 2016 and had a personal best of 2:12:54. The national record he broke was 30 years old: Back in 1987, Geir Kvernmo clocked 2:10:17 in London. “One day I hope to run 2:07,” said Moen, who plans to run a fast marathon in autumn. “I would like to improve to 2:09. And next year my goal is to win a medal at the European Championships.“

In the women’s race, Fate Tola left behind her rivals soon after the 10 k mark. When she reached 15 k in 51:48 she was already more than a minute ahead. With split times of 1:13:06 at half way and 1:43:42 at 30 k it looked certain that she would break the course record of 2:27:07. However, after one of her pacemakers pulled a muscle and dropped out and the other one also stopped with around ten kilometres to go she suddenly slowed. “It was strange because between 36 and 38 k she lost around one minute. Afterwards Fate recovered and was running faster again. But she could no longer break the course record,” said her coach and husband Musa Roba-Kinkal.

“I am happy to win a marathon again,“ said Fate Tola, who took the Vienna City Marathon twice in 2011 and 2012. „I am not disappointed regarding the time. It was getting tough without the pacemakers. Now I will concentrate on the preparation for the World Championships in London.”

The German half marathon championships were staged parallel to the marathon in Hannover. Philipp Baar was a surprise winner in 64:57 while Hendrik Pfeiffer showed a fine race taking second place in 65:09 after a long injury break. Sabrina Mockenhaupt won the women’s race in 70:54 from Anja Scherl who clocked 71:09.