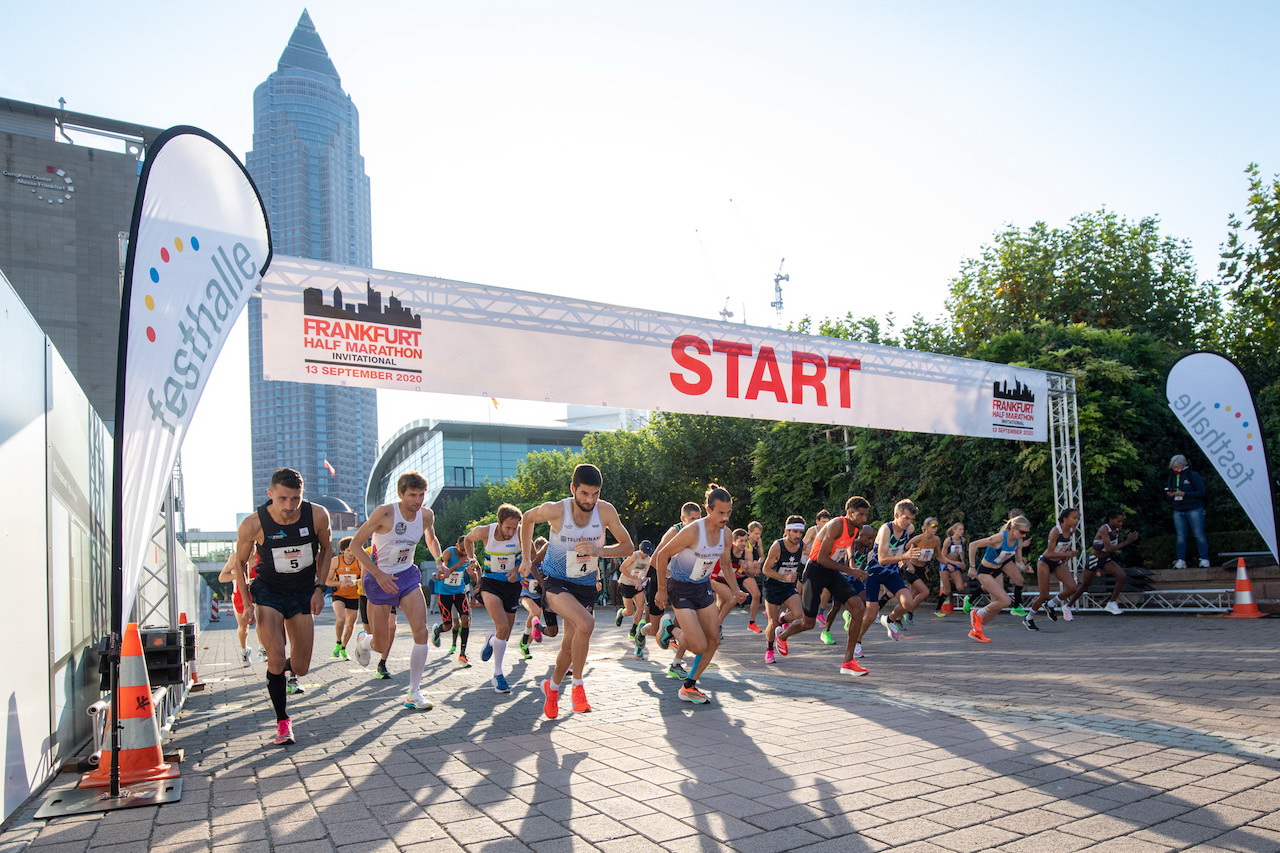 Amanal Petros and Melat Kejeta dominated the Frankfurt Half Marathon Invitational on a warm Sunday morning. While Petros clocked 63:31 Kejeta ran a strong time of 69:04 on the flat 3k loop course inside the Frankfurt fairground. Both will head the German teams for the World Half Marathon Championships, which are planned to go ahead on 17 October in Gdynia, Poland.

The race was staged under coronavirus restrictions with social distancing and other hygiene measures in place. No spectators had access to the course. “In view of the situation it was a successful event, which made everyone involved feel positive – especially the athletes, but also the organizing team,“ said Jo Schindler. The Race Director of the Mainova Frankfurt Marathon, which had to be cancelled due to the Coronavirus situation, organized the half marathon with his team and with help of Berlin athletes’ manager Christoph Kopp. “In the meantime, we are optimistic that our marathon with the spectacular indoor finish will be back next year,“ said Jo Schindler.

Frankfurt’s head of sports department Markus Frank started the race and commented: “It is really important for the sport that something takes place. Jo Schindler and his team have shown that it is possible and that some creativity is needed. I thank everyone who made this possible.“

Dutch runner Mohamed Ali and Amanal Petros moved away from the main group early in the race. When they passed the 10k mark in slightly under 30 minutes the gap had grown. „It was great that Mohamed Ali ran with me, giving me some support,“ said Amanal Petros, who moved ahead with less than five kilometers to go. „It was great that this event was staged in these circumstances. It could not have been better and I have to thank the organizers.“

While Mohamed Ali held on to second place in 63:51 Eritrea’s Solomon Kidane finished third with 64:15. Meanwhile, German marathon record holder Arne Gabius, who established the current mark of 2:08:33 in Frankfurt in 2015, was unlucky. Breathing problems forced him to stop after 9 k. He lost around two minutes but did not give up. Gabius finished 18th in 67:30. “Preparing for the marathon it was my aim to run a time of 64 today. It is a pity it was not possible as apart from the breathing problems I felt fine,“ said Arne Gabius, who targets the Olympic qualifying time of 2:11:30 in London on 4 October.

In the women’s race, Melat Kejeta built a big lead early in the race. It was the first competition for the 27-year-old favourite since February when she ran 68:56 in the Ras Al Khaimah Half Marathon (UAE). In Frankfurt, she missed this time by just eight seconds. “My goal was to get a time of 67 today, however, it was difficult running all on my own,“ said Melat Kejeta, who did not train for two months when the Coronavirus pandemic started. „Now I am more optimistic again,“ said the former Ethiopian, who will prepare for the World Half Marathon Championships in St. Moritz (Switzerland).

Frankfurt’s second placed Miriam Dattke ran 72:03 and should also have secured nomination for the championships in Gdynia. She had been following the pace of Katharina Steinruck for most of the race and then ran past her with around five kilometers left. „I intended to run around one minute faster. But it was my first race for some time and somehow I felt nervous,“ said Katharina Steinruck, who tied her personal best of 72:23 in Frankfurt.