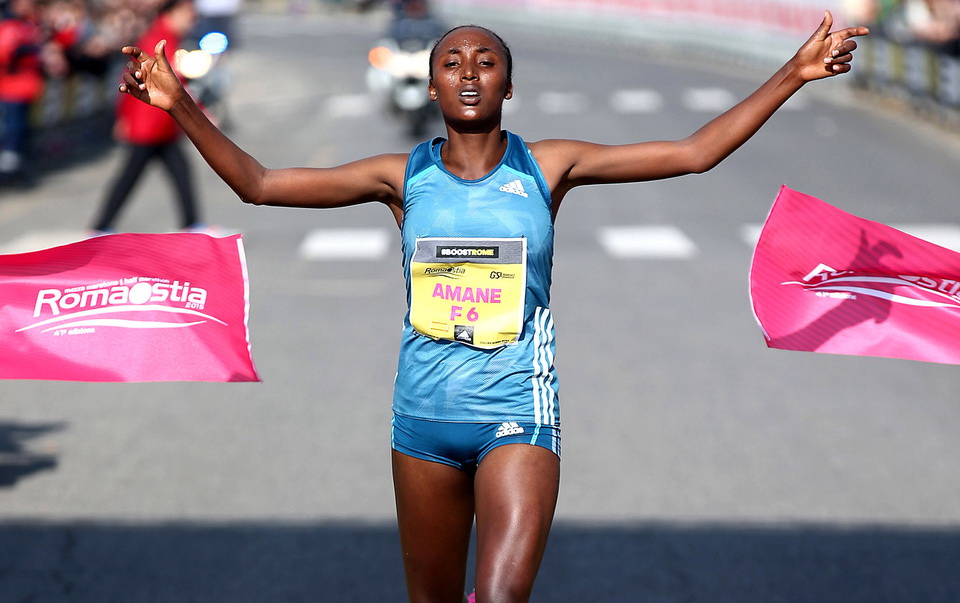 Ethiopia’s representation at this year’s Scotiabank Toronto Waterfront Marathon just got stronger with the addition of Amane Beriso to the elite women’s field.

With a personal best of 2:20:48, recorded when finishing second at the 2016 Dubai Marathon, the Ethiopian has the fastest personal best of any woman who has ever lined up at this IAAF Gold Label race. And it is apparent she also possesses the mindset to challenge her compatriot, and defending champion, Marta Megra.
Victory is her primary objective, though she warns her rivals that the Toronto course record of 2:22:43, held jointly by Sharon Cherop (Kenya) and Koren Jelala Yal (Ethiopia), could also be in jeopardy when the race goes off on October 21st.
“Absolutely, nothing is impossible, I believe,” says Beriso, who celebrates her 27th birthday October 13th. “I think with Marta Megra it’s going to be a little difficult, but it is possible and I am in it to win it.”
“We have one month of training remaining, so I am willing to take on any challenge in front of me and I will try to improve the course record.”
This is no idle boast. Besides her brilliant run at the Dubai Marathon a year ago, Beriso ran 2:22:15 in Prague last Spring which earned her second place in that IAAF Gold Label race. It was another eye-catching performance and if it wasn’t for an ankle injury which plagued her over the past year, she may have piled up additional credentials. Now healthy and fully fit after seeking treatment in Germany, she looks ahead to the battle for glory and a $80,000 payday.
Despite having twice run well under the Toronto Waterfront course record, she is a novice at the distance. Dubai, in fact, was her debut.
“Yes I am new to the marathon and like any other athlete I get advice from my coach Gemedu Dedefo and my management (Gianni Demadonna) and also other athletes on how they see the race being won,” she admits. “They give me advice on how to beat my opponents.”
Beriso grew up in the Arsi region of Ethiopia about three hours southeast of Addis Ababa. This area has produced many of the country’s Olympic champions including Derartu Tulu, Tirunesh Dibaba, Haile Gebrselassie and Kenenisa Bekele. Their tremendous accomplishments were well touted to youngsters like Beriso. But it is after she moved to the capital that she truly believed she could become a professional distance runner.
Coach Gemedu’s group meets up anywhere from three to five times a week to train usually in places like Sendafa and Sululta a short drive outside Addis. The altitude (2,800m+) and virtually traffic free dirt roads allow them to follow his program precisely. Two-time Toronto champion (2015 and 2016), Shure Demise, is among those whom Beriso counts as training partners. The preparation for Toronto is going according to plan.
“I feel I get better and better each time when I am training,” Beriso says. “I feel that mentally and physically I am capable of running good times. I feel great about myself and my fitness is better than last year.  So, I am ready to take on any challenge that comes my way in the competition.”
Although training and the necessary recovery eats up much of her day, Beriso finds time to relax and escape the grind of athletics.
“I am not married but, I am engaged,” she reveals, “I have a fiance and we are thinking of getting married. We haven’t set a date but sometime in the future I hope to have a family of my own.
“I spend my spare time hanging out with friends, watching a movie, seeing my family and going to places just to relax.”
Beriso joins the aforementioned defending champion Marta Megra, Kenya’s Ruth Chebitok, two-time Commonwealth medalist Jessica Trengove and Canada’s own Krista DuChene, who earned a spectacular third place finish at the 2018 Boston Marathon as some of the leading names for this year’s Scotiabank Toronto Waterfront Marathon women’s field.
“As I said, the Toronto race is a big deal for me because I feel that would be a big win for me,” Beriso declares. “So, my first goal is winning the race and to show myself that I am capable.”
For more information and entry to Scotiabank Toronto Waterfront Marathon see www.STWM.ca