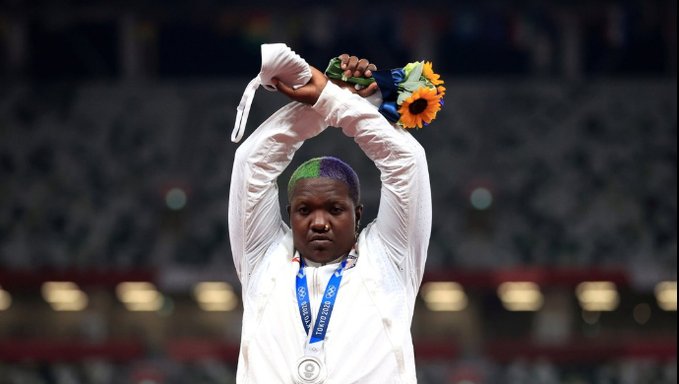 Saunders raised her arms to display an “X” after receiving the silver medal at the Olympic Stadium.

She told Associated Press that she protested to represent “the intersection of where all people who are oppressed meet”.

Shot put Silver medalist #RavenSaunders of #TeamUnitedStates makes an 'X' to show support and signify the intersection of where all oppressed people meet, during the #tokyo2020 #OlympicGames 📸: @RyanPierse #athletics pic.twitter.com/yVsLOS7tQL

The International Olympic Committee (IOC) although less strict in Tokyo said that the protests are still banned. The IOC has warned athletes who protest or demonstrate on the podium could be sanctioned.

The IOC said incidents will be dealt with on a case-by-case basis, with possible sanctions to be determined by the IOC’s Legal Affairs Commission. Rule 50 reads: “No kind of demonstration or political, religious or racial propaganda is permitted in any Olympic sites, venues or other areas.”