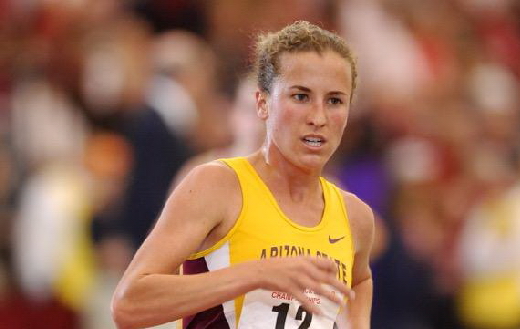 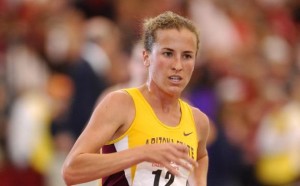 Amy Cragg (née Hastings) is currently one of America’s fastest distance runners. She has competed at a high level over the 5,000 and 10,000-metre distances for over a decade and more recently the marathon. She is now focussing on the USATF Olympic Marathon Trials that will take place on February 13th, in Los Angeles.

Cragg enters the event with the third fastest qualifying time of 2:27:03 from 2014. The two women in front of her are Shalane Flanagan with her 2:21:14 and Desiree Linden who has run as fast as 2:23:54. The top-three finishers at the trials race will be eligible to go to the 2016 Rio Olympic Games, regardless of their finish time.

One-hundred and 98 American women have run 2:45:00 or faster within the qualifying window to race the trials. A further 48 have run the equivalent performance in a half-marathon (1:15:00) and are, according to United States Track and Field (USATF), eligible to compete in the trials, making it a total of 246 women who may toe-the-line.

Cragg hopes to finish top-three, she was fourth behind Linden, Flanagan and Kara Goucher last time in 2012, but went to the 2012 London Olympics anyway, in the 10,000-metre event, where she ran her personal best of 31:10.69 finishing in 11th position.

Cragg runs for the Bowerman Track Club and is coached by Jerry Schumacher. She has been training with Flanagan both in Portland and at altitude in Flagstaff, AZ.

Christopher Kelsall: First off, do you prefer Amy Cragg or Amy Hastings?

Amy Cragg: Well I am known more by Amy Hastings, but my last name is Cragg, now that I am married to Alistair Cragg.

CK: Alistair is quite the distance runner; are the two of you competitive with your careers?

AC: [laughs]. No not really. He would be very happy for me if I surpass anything that he has accomplished, but he is retired now, so is very supportive of my running career.

CK: Do you get to train together?

AC: Yes, we go on some runs together. He will also go for runs with some of the others at OTC. He runs with my coach (Jerry Schumacher) and will step in and do some pacing for workouts when needed.

CK: Speaking of coaching, you have had some very good ones including Schumacher, the legendary Ray Treacy and Louis Quintana at Arizona State University. To me they seem like they would have similar training schedules? Are you a lower or higher mileage runner?

AC: Yes, they will even run as low as 20 miles, depending on the person. In my case higher always worked better for me.

CK: Now looking at your 10,000m and marathon bests, it is interesting that your half-marathon bests performance-wise are not quite at the same level of the other two, why is that?

AC: Well I love the marathon and I love track and the half-marathon has never been the end-game for me. The first half-marathons I did, it was earlier in my career and I was just not as fast as I am now, but later, they have been used as preparation to run a marathon. I have never actually peaked specifically for a half-marathon. Often I have raced them when I was in the middle of higher training mileage in preparation for a marathon.

CK: So were you trying to run them at marathon goal pace?

AC: No, they were faster than that, but still a little slower in comparison, again because I was in the middle of heavier training loads.

CK: It appeared that you were moving from the 10,000m to the marathon in 2012, but you have continued racing well over the shorter distance. Have you now finally settled on the marathon?

CK: How is your fitness, any niggles or injuries to battle through?

AC: No. I am in great shape and injury free.

CK: You have run as fast as 2:27 twice. What sort of time do you feel you will achieve in the trials race?

AC: Whatever it takes to finish top-three. That’s all that matters. It doesn’t matter how fast we race, it is about positioning, as we already have the Olympic standard (2:45:00), which you have to have to be able to compete in the trials, so that is what it will come down to; finishing top-three.

CK: But what sort of shape are you in? If you had to, how fast could you go?

AC: For sure at least as fast as my 2:27s, but I am not thinking about that. Like I said, it doesn’t matter; I will have to do whatever I can to race to finish top-three as THE goal.

CK: How do you feel about WADA’s Independent Commission investigating Russia and the IAAF?

AC: You never want to see that happen. It is just incredible, but they can’t go on pretending that it wasn’t happening. So let’s hope that it helps to clean the sport up. It doesn’t look good and it does look like there was a lot of covering up. I just hope it makes for a cleaner sport.

CK: You have run 31:10, which is pretty fast. Why do you think that it has been three years now since we have seen consistent sub-31s from your competitors? Do you think that the real fear of getting caught is curbing the doping?

AC: Hopefully, but I think low 30-minute 10,000m can be done by clean athletes. Obviously there will be less of them, but I think clean athletes can do it. Keep in mind, there aren’t that many 10,000m events available. For example the Diamond League doesn’t have any. There are not that many around. And typically when you do see a 10,000m race, it is often a championship event, which of course are more tactical in nature, resulting in slower times. The only real fast ones are the Stanford Invitational and Payton Jordan Invitational.

CK: Were you an active child growing up in Leavenworth, Kansas?

CK: When did you get serious about your running, was there a turning point for you?

AC: In grade nine. I mean I still did other things like riding and I played violin, but that is when I got more serious with the running. I was taken in by the older girls in high school. They treated me so well; they really embraced me, which made a difference.

It was the first time that I felt I could finally contribute to the team. I was never that skilled at the other sports, so running was great because I felt like I could make a difference to the team results.

CK: Are your two siblings into sports?

AC: Yes my brother has run the marathon and got a Boston qualifier and my sister is skilled at all the sports and not as strong in running.

CK: So the exact opposite of you?

CK: Earlier you said you love the marathon and track, what about cross-country?

AC: Yes, the muddier, the better.

CK: Speaking of family, you are 32, newly married and after Rio of course the next Olympics doesn’t happen until 2020. Do you have family plans for after Rio?

AC: I am not thinking about anything but the trials at this moment.

CK: Single-minded focus for top-three at the trials on February 13th?