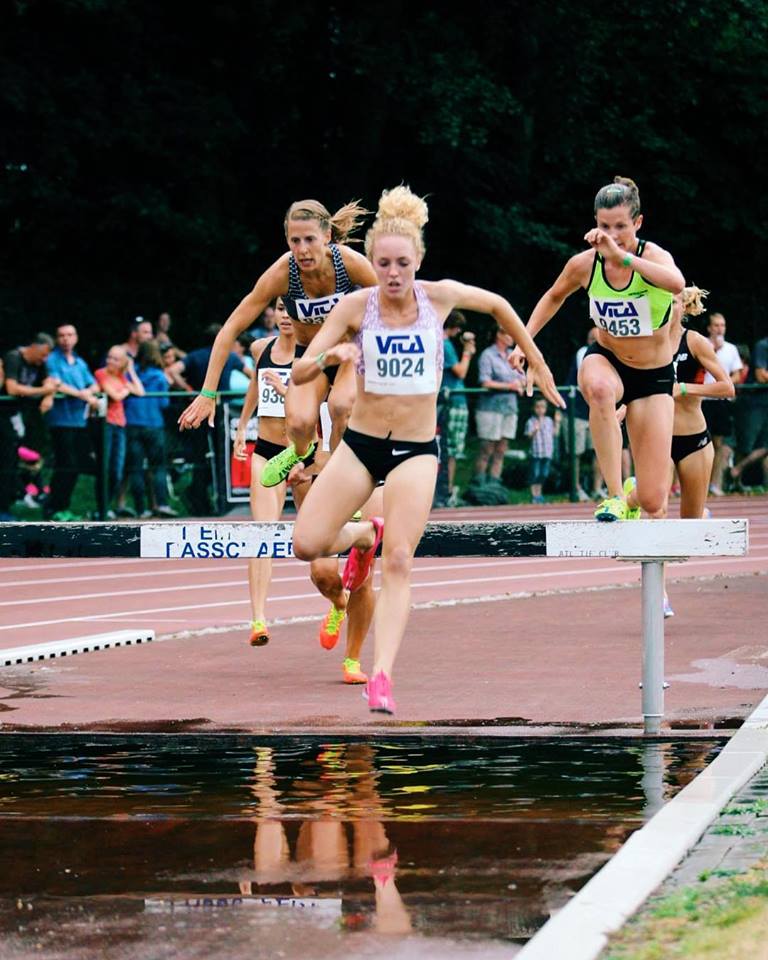 For the women’s steeplechase, Canada goes from one international competitor to three in one event, as Regan Yee and Jessica Furlan perform well in Europe.

Vancouver’s Yee ran one of, if not, the best performance of her career to date, Sat. July 28 in Ninove, Belgium. The Trinity Western University alumna ran the third-fastest time in Canadian history in the 3,000-metre steeplechase. She finished in the time of 9:37.31.

Yee took the lead immediately and held it for the duration of the race.

“I’ve been putting a lot of work in, so I’m glad that my performance displayed it,” Said Yee. “However, it definitely could have gone better.”

Weeks leading up to the performance, her coach Mark Bomba, had indicated that she was ready for a big performance leap, based on the workouts she was having.

“Yee is ready to take a shot at the national record or perhaps second-fastest all-time if conditions are good and there is a decent field,” said Bomba. “She could have won nationals with different tactics.”

He was referring to the Canadian national championships that took place in Ottawa on June 5th where she finished second in the time of 9:49.72.

“Ninove was very windy, I had no one to push me in the final 200m for a kick, and there was one hurdle in particular that tripped me up almost every lap for some reason, and with 700m to go, I slammed my knee into it! So, there’s certainly room for improvement.”

The national record is 9:29.99 and is owned by Montreal’s Genevieve Lalonde. Lalonde set the record during the 2017 IAAF London World Track and Field Championships.

Number two in the Ninove race was fellow Canadian Jessica Furlan from Regina. The University of Nebraska alumna, back from injury, was rewarded with a time of 9:45.79. Furlan owns the second-fastest Canadian time at 9:33.45, which she set in the Heusden-Zolder meet in 2014. It was the national record before Lalonde improved it.

It was Furlan’s first race since the Olympic Trials in 2016.

So for Furlan, this performance was right in the middle and is a good starting point, “and about exactly what I expected,” she added.

“Workouts the past month and a half have gone really well, all things considered.”

Furlan was diagnosed with a stress reaction in late January and didn’t start back running until the end of February.

“I went up to Flagstaff in mid-April but didn’t start doing track workouts until the second week of May. I was up there for almost two months and had a couple little hiccups while I was there, but overall it was good. It’s just kind of difficult to know what your fitness is like when you only start doing workouts at altitude and everything seems hard. Once I came down and was doing sessions at sea level in Victoria, I was pleasantly surprised at how good I felt, hitting times I haven’t touched since before my injury in 2015.

Furlan will stay in Europe for the next month and will continue to race.

“I will be running a 1500m this Saturday in Leuven, Belgium, and then will head up to St. Moritz, Switzerland for about a week and a half before coming back down to race again, I’m just not sure where yet. Finding steeplechase races this late in the season is proving to be pretty difficult, but I’m hoping to get into at least one more because I think there’s still a lot that I could accomplish in that event this season.”

As for Yee, she will gladly miss the upcoming cross-country season, to take a family trip to China.  However, like Furlan, is pleased with where she is leaving off this outdoor track and field season.