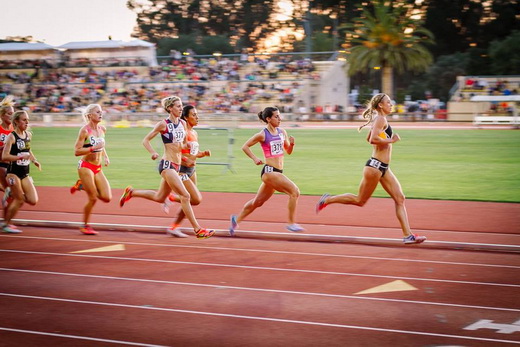 Andrea Seccafien of Guelph, Ontario is a distance runner who competes primarily in the 5,000-metre event. She has run a 4:10.70 for 1500-metres.

Seccafien qualified for the 2016 Rio Olympic Games during the Hoka One One meet that took place in May this year in Los Angeles, California, by finishing in the time of 15:17.81. The Olympic standard is 15:24.

She rubber-stamped her selection for Team Canada by winning the Canadian Track and Field Championships that took place in Edmonton (TrackTown Canada) from July 7 to the 10th. She finished ahead of a very strong Sasha Gollish and the current fastest Canadian Jessica O’Connell. O’Connell has run as fast as 15:06.44.

Seccafien currently lives in Toronto and trains with the University of Toronto Track Club (UTTC).

Christopher Kelsall: Apparently growing up, you played soccer and were into dance, which form?

Andrea Seccafien: I took dance classes but never competed from when I was very young, probably around 7 to 15 and I always took tap and either jazz or hip hop.

AS: I started playing house league soccer in elementary school, then played rep for two years when I was 12 and 13. I stopped when I started running more seriously in grade 9. I played forward.

CK: You must have had a very clear indication around that time to drop both soccer and dance and focus just on running. Was there a single defining moment or a race where you came away realizing that this is where your talent lies?

AS: I can’t say that I was a standout soccer player. While I was playing rep for Guelph, the team was awful. During those two years, I think we won three games total and I may have scored one goal. But then in the fall, when I ran my first high school cross country season, I was doing really well and I qualified for OFSAA. At that age, I was definitely very extrinsically motivated and saw that there was now a different sport that I was good at and I could go to the big meets and win those ribbons. That winter I joined the Guelph Track Club and from there I really started getting into the sport.

CK: You had a sudden drop in your performances this year, although you probably had workouts that pointed to an improvement, were you surprised by your 15:17.81 in the Hoka meet?

AS: Yes because I think there is a huge difference between doing workouts that indicate a certain fitness and actually executing on the day of the race. We had been working out at 15:20 pace with the Olympic standard in mind for several months, so it wasn’t a total shock. But coming from where I was at 15:52 before the season started to taking off 35 seconds and hitting an Olympic standard is surprising regardless of what your workouts indicate.

CK: What were the key ingredients to your improvement? For example, did you up your mileage volume for a spell?

AS: There are a couple of changes that were instrumental in my improvement. And I actually ran a lot less than I usually would!

I switched clubs this year which has to be the biggest source of improvement. I joined the University of Toronto Track Club in September of last year and am now coached by Ross Ristuccia. Ross and I have really “clicked” in our athlete-coach relationship and his style of training has really worked for me. Ross takes the time to get to know his athletes and is there for them on a relational level which I really appreciate and is so important to me. He is also just a great coach and knows how to write a program, but also isn’t afraid to make changes on the fly or listen to his athlete’s input. I honestly cannot say enough good things about Ross and I would not be on this Olympic team without him.

I also had great training partners in Sasha Gollish, Tamara Jewett and Gabriela Stafford and a slew of younger men on the team that were always there to help me get through really hard workouts that definitely helped me reach a higher level this year.

I spent a great deal of time working on my stride and strength with Kris Sheppard at the Runner’s Academy in Toronto. My stride was really inefficient and frankly, just slow, before I started working with him. I was a shuffler with poor upper body posture and constant niggles. But Kris improved my stride and helped me become more efficient through strength training focusing on hamstring and glute strength. He is also a fantastic chiropractor and has helped keep me healthy all season.

AS: We had three pacers who were taking us through 3000m at 9:12 (15:20 pace). It was a large and talented field so I knew there would be several women going after the Olympic standard. I still positioned myself near the front because I like to feel in control and be able to respond to what happens up front. Until the final pacer dropped, the whole field was together, but after 3000m Kellyn Taylor (an American) took over and continued pressing the pace right around 3:04/km. I knew what I had to be through each kilometer to hit the standard so I had that in mind, and we were still right on pace for 15:20 at 4km.

Going into the race one of my goals was to win, though I knew that was an outside shot. When I found myself in the lead with 800m to go, I really wanted to solidify a gap between me and Kellyn and not leave a question about whether or not I was going to hit the standard. With a lap to go, I definitely had that very cliche “Olympics, Olympics” thought going through my head and I tried to just close as fast as possible.

That race was one of those times when a personal best honestly feels effortless both physically and mentally. That was also probably the best tactically I’ve ever run and my coach Ross, who wasn’t there, still talks about how I did everything he would have told me to do. I know the ‘perfect race’ is an elusive thing, but that was honestly about as perfect of a race as I could have asked for.

CK: You mentioned that it felt effortless and smooth, so would you suggest that you could have run faster in that particular race?

AS: I like to think I could because I was alone for the last 800m and I only closed in a 70, which is actually pretty slow for me. I know if I had still been racing someone in those last two laps, I would have put up a fight to win and likely would have closed faster in the last lap.

CK: Interesting that you blogged about the taboo topic of weight loss for women. What are your thoughts on the calculation for men and women where you lose two seconds per mile, per pound when over optimum weight?

AS: There is no denying that with a weight bearing sport like running, the lighter you are, the faster you’ll run. But for optimal performance, body composition is far more important than body weight. In season, I’m never trying to “lose weight.” I’m looking to increase my lean body mass, which impacts the way I fuel, but I never diet. If we are talking about a certain measurement to go by to improve performance, body fat percentage is much more reliable and holistic than body weight.

That said, body composition is just one thing similar to any other metric like mileage or pace that you can use to get better. At the very highest level this does matter, but not enough to take away from the other elements. An athlete and their performance is more than just a number on a scale or percentage of body fat.

That stat, when you lose two seconds per mile, per pound when over optimum weight is really limiting. If you are doing work every single day, and you feel good and are hitting your workout paces, that’s way more important than one pound. I wouldn’t encourage anyone to read too much into that stat either because you can definitely run well in a weight range, especially women who have fluctuations in weight over a month because of hormonal changes.

CK: What was your reaction to seeing or hearing your name on Monday, the day after the trials finished, where you were selected to represent Canada in the Rio Games?

AS: I already knew I was going to be selected to the team because I won the 5000m at Nationals and would therefore be automatically selected. I mostly felt a sense of relief after the race because with tactical races, you never know what’s going to happen.

In the whole experience of trying to make the Olympic team, running the standard was the more emotional and exciting step for me considering I started the season so far off the standard. That’s not to say that winning nationals wasn’t hugely exciting, I just felt like I had already done the hardest part by the time I reached Edmonton.

For me, knowing that I made the team was really fulfilling because I had made it through the tribulations of the past two years and I am finally on an upswing.

CK: During the winter, could you visualise and did you believe that in late spring, you would be that much faster?

AS: No, but I think that worked to my advantage. I think coming off an injury, switching programs and having no expectations helped me to just enjoy the process of getting fitter. Being completely nonchalant about the Olympics became my secret weapon.

I joined UTTC because I wanted to have training partners and I didn’t care if I ran 16:00 as long as I was happy and healthy. That took out any thoughts about the Olympics or lofty goals for a long time while I just built back up from being injured and focused on completing workouts well day after day.

The Olympic standard started becoming a somewhat realistic goal after I raced at the Husky Classic and ran 9:08 (a 10 second personal best) after just two months of consistent running and workouts. But it wasn’t until Payton Jordan that I really believed, without a doubt that I could run the standard.

CK: What is your most favourite part of running? Long runs in the forest or standing on the start line of an important race? What motivates you to slip into the gear every day?

AS: I am definitely one of those people who loves the grind. Long runs and long, 5000m specific workouts on the track are my two favourite parts of running. And of course I love to race, especially when I believe I can win.

I am motivated to find out how good I can be and to see if I can achieve my highest goals.