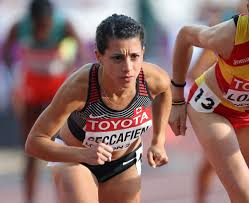 For example, on Sunday, Andrea Seccafien broke the national half-marathon record in Marugame, Japan. She finished in the time of one-hour, nine-minutes and 38 seconds (1:09:38).

The 29-year-old who is currently living in Australia, took down Natasha Wodak’s record from two weeks prior, who was the first Canadian to break the 70-minute benchmark. Wodak ran 69:41 in Houston, TX on Jan. 19 to take fellow Vancouverite Rachel Cliff’s record which she set on Dec. 15 in Okayama, Japan with a 70:06 performance. She had bettered her own record from March, 2018, where she ran 70:08 in Woodlands, TX.

Seccafien’s half-marathon debut came two years prior in Gifu, Japan when she ran a solid 1:13:19; which may have provided a foreshadowing of things to come.

Talk about tough, on Sunday, she ran a positive split passing through 10K in 32:39, which is approximately 68:50 pace. She slowed, but the positive split worked for her on the day. Perhaps there is even more within her with a negative split run.

Seccafien qualified for the 2020 Tokyo Olympics during the 2019 World Athletics Championships running a 5,000-metres best of 14:59.95; achieving back-to-back personal bests at the meet in Doha, Qatar.

She finished 17th in the Marugame International Half Marathon.