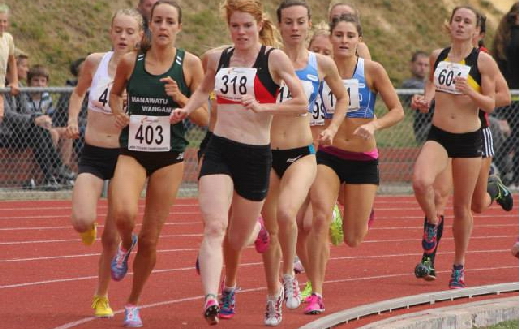 Twenty-three-year-old New Zealand athlete Angela Petty is a middle-distance runner who is currently specialising in the 800-metre distance. She will be competing in the 2015 Beijing IAAF World Track and Field Championships taking place in the Bird’s Nest from August 22nd to August 30th.

She competed in the 2008 IAAF World Junior Championships that took place in Bydgoszcz, Poland as well as the 2014 Glasgow Commonwealth Games finishing in fifth place in the final race with a new personal best time of 2:01.94.

Christopher Kelsall: For several years you have run consistently just around 2:00.00. In 2015 you have gone under that mark at least a couple of times, what has been the difference that enabled this improvement?

Angela Petty: I think there are a number of things including general progression as I get older and keep training hard and following my coach’s programme as she continues to help me improve. Also my health has been a lot better than it has been since finding out I was celiac in May this year. My coach has added in a few new things in training including a bit more endurance work which has helped me hugely, my 1500m time has dropped this year and helped my 800s. But of course I know that mostly it’s thanks to God for giving me the strength and allowing all these things to help me continue to improve.

CK: Have you been anemic from having Celiac Disease?

AP: No thankfully not, but I was tired a lot when I was eating gluten before I knew. I have been anemic in the past though so take iron tablets.

CK: Can you describe the endurance work that has been added? What sort of weekly volume did you move up from?

AP: Yes I have been doing a bit more mileage in general, still not massive compared to some people but up to about 80K a week in my endurance phase and quite a bit more up-tempo work, so running at a quicker pace for the second half of my warm up before a session, and more tempos and longer hill intervals.

CK: Can you describe your favourite type of run?

AP: Probably running on the hills with a nice view, one of my favourite spots to run would be up the port hills in Christchurch. My favourite training session would probably be 200s, and one of my toughest but also favourites in terms of how much it helps would be 5-6x 600s hard off 600 jog recovery.

CK: At the 2014 Glasgow Commonwealth Games you made the final and finished fifth in 2:01.94. Would you suggest this performance to be a bit of a breakthrough for you?

AP: Yeah I was really happy with this result, the time wasn’t flash and my pb at the time was 2.00.03 from the year before but considering the tough competition I was up against, I was over the moon to be in the final and get fifth. It was also my first big competition where there was big public following back in New Zealand and I was overwhelmed with the support and the Commonwealth Games have definitely been a big part of my career so far!

CK: How did you execute that final race at the Commonwealth Games? Did it go as planned? For example, what were your 400m and 600m splits?

AP: I decided to sit back a bit because I wanted to save something, had gone out too hard in the heats and blown up, and thought everyone else would go out hard. Also I got a bit stuck from being in lane one and it was hard to get into good position from where I found myself after 100m. So I think my splits were about 60 seconds, and 130 at 600. It wasn’t as fast as I thought the final might be, maybe because it was quite tactical.

CK: New Zealand has a strong history of performance and support in athletics. Do you see signs of that now when performing at home or at a global championships?

AP: Yes I do, it’s really special to be following in the footsteps (although obviously not at their level yet but hope to be one day!) of some great runners from NZ and I feel privileged to have these athletes to look up to, including John Walker, Peter Snell, Toni Hodgkinson, Nick Willis and many more. And yes the support is amazing, so many people in NZ seem to get excited by watching athletics and New Zealanders do love their support in general! I so appreciate the support I get!

CK: What was your childhood like growing up in Christchurch? Were you into various sports or were you always specifically interested in running?

AP: It was brilliant! My parents and I are very close and I have three siblings and Canterbury is a beautiful area, so we always had a lot of fun. I lived in Christchurch until I was nine, when we moved out to Rangiora (30mins North of Christchurch). I had always loved running and joined the North Canterbury Athletics club when I was 10. I played hockey for a club from about the age of 12 right through ‘til I finished high school at 18, I stopped hockey then so I could focus more on my running. I have always enjoyed skiing as well and being in the outdoors, I enjoyed most sports at school but wasn’t very good at netball, even though that’s big in NZ. Running was always my being passion in sport though and I dreamed of the Olympics since a young age.

CK: When you refer to hockey, do you mean turf hockey?

CK: You have run fast enough to compete in this summer’s Beijing World Championships. Are you on the team?

AP:  Yes I have ran under the qualifier of 2.01 four times so far this season, by running 2.00 twice and 1.59 twice so far this season. The Olympics qualifier is the same, so it was a dream come true when I ran my first World qualifier and Olympic qualifier as the NZ qualifying period for the Olympics was from May this year so it’s a dream come true to have qualified for my first Olympics, and the first time I qualified was just before my Nanny passed away from cancer, so I dedicated it to her, she is such a big inspiration to me.

CK: What are your long-term running goals?

AP: To make the final at this year’s World Champs and if I do then ultimately would be to make top five, medal at next year’s Olympic Games and maybe Tokyo 2020, break the NZ 800m record held by Toni Hodgkinson of 1.58.25, continue to improve both my 800m and 1500m’s and be the best athlete I can be! My husband is a good triathlete (recently switched from track to triathlon) so I hope we can both win medals for New Zealand, as we both continue to compete for God!