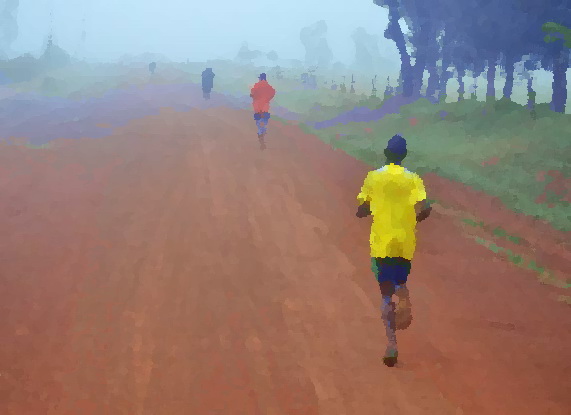 In third world countries like Kenya, corruption can run rampant at all levels of society—everyone is just trying to survive. One issue that may not have come up in all of the media dialogue about the sudden increase in positive doping tests by Kenyan athletes is at the sample extraction level. Are all doping control officers in Kenya fellow Kenyans? Are they prone to corruption? If so, is there a vetting and training issue?

Currently, Kenya has seen an alarming spike in the number of positive doping tests. At this time, there are approximately 50 athletes from the country who are ineligible to compete due to doping, adverse Athlete Biological Passport findings, or missed whereabouts reporting.

Doping or corruption may or may not be behaviour that Kenyans are prone to, but if attempting to extort someone who “tested positive” to alter their results is within the power of the doping control officer, or to suggest it is, would it be worth agreeing to? It may be for an athlete who can potentially earn a decent living in Europe and North America while competing. But not so for 1500m great Asbel Kiprop, if what he claims happened to him actually took place.

In November 2017, Kiprop was warned that he should expect a doping control officer at his door the next day. Advance notice is prohibited.

Kiprop gave the doping control officer money, thinking that the request that he had made was perhaps to purchase tea or fuel for the car, but it was to extort money from him. In Kenya, as in many places in the world, small gifts of cash are ordinary. He thought nothing of it, he claims.

Kiprop’s test results came back positive for EPO in February 2018. EPO is a popular blood-booster for distance athletes who may seek an unfair advantage. He was subsequently suspended in March of 2018. Perhaps his “gift” wasn’t big enough.

A similar story has surfaced by another Kenyan athlete.

Steven Kip (not his real name to protect his identity) is a distance runner from Kenya who claims that there was an attempt to extort him by a doping control officer. He claims that it happened sometime during 2019.

Kip is a competitive athlete having run 13-low for the 5,000m and had accomplished other similar performances in the 10,000m and half-marathon distance events.

Shortly after, he was informed by Athletics Kenya that he was suspended. The Athletics Integrity Unit (AIU) published the suspension on its website.

Christopher Kelsall: Kip, you allege that you experienced an extortion attempt from a doping control officer last year, is this true?

CK: Was this an out-of-competition test at your home in Kenya?

CK: Can you describe what happened?

Kip: It was on October 13th, 2019 at 11.00 am. I received a call from an unknown and anonymous person claiming to be a WADA representative who was supposed to test me. He later came and took my blood samples. The results came out positive two months later.

He again called me and asked for a meeting on the above issue. To my surprise, he told me he had the ability to modify the results on a price of $5000USD which was actually convincing but I did not agree since I believed I was clean.

A few days later I received a call from Athletics Kenya [telling me] that I was banned due to doping.

CK: What was the drug that they claim that you tested positive for, EPO?

Kip: They termed it something like Norandrosterone. I didn’t really understand the name quite correctly.

Editor’s note: Norandrosterone is an anabolic steroid that can be detected from a urine test. The product has been used for at least 30 years.

CK: So, did the representative go through the testing process in a normal way? Did anything seem wrong or out of place during the visit?

Kip: From what I saw, everything was normal, all tests conducted rightfully.

CK: Could you tell which country that the representative was from? Was he or she Kenyan?

Kip: I’ve had out of competition tests.

CK: You were provisionally suspended at first. Did you attempt to appeal the suspension?

Kip: No, I could not appeal the suspension because I knew [they felt] that I was guilty as charged.

CK: Did you try to contact WADA or any other authority like Athletics Kenya to explain the apparent extortion attempt? If so, what was their response?

Kip: I did, but at the end of the day AK said they’ll look at the matter.

CK: We have agreed to keep your identity hidden. Can you explain why you feel that you need to remain anonymous?

Kip: My identity should be at all times hidden because of course, I will still need them (AK) after my ban is over. Exposing myself could lead to even worse results. My career might be in jeopardy.

CK: Five-thousand U.S. dollars is a fair amount of money in the U.S. it is even a larger sum for a Kenyan. Apparently the average Kenyan police officer makes 90,000KES per month. The $5000 is equal to six months of salary. Were you surprised by the size of the apparent ask?

Kip: Of course I was surprised, the amount was high but to my knowledge, the amount is decided depending on the athlete’s financial ability to raise the amount.

CK: If you are not appealing the decision, what do you hope to accomplish by sharing your story? Should the Kenyan doping control officer be brought to justice?

Kip: I’d really love for the officer to be brought to justice, not only for me but also for other athletes who might be in the same situation as I and others probably won’t be able to pay the extortion amount and their career might go to waste. Moreover, it will also help reduce or remove the habit which has been happening all along. This is Kenya and fighting corruption is like a wild goose chase.

To add to Kip’s answer, Kenya’s reputation has dropped significantly. Kenyan athletes may be afforded fewer opportunities to compete if there appears to be systematic or widespread doping in the country.