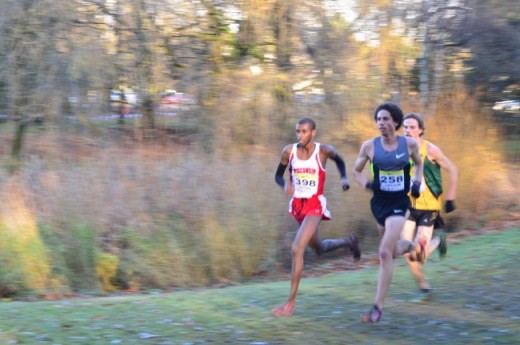 UPDATE 7/16/14: Cameron Levins and Mohammed Ahmed have both been added to the 5,000m race in the 2014 Glasgow Commonwealth Games.

Since competing at the highest level during the 2012 London Olympic Games and the 2013 IAAF Moscow World Track and Field Championships are two of Canada’s fastest all-time 10,000m runners ready to break out at the 2014 Glasgow Commonwealth Games? Representing Canada  in the distance are Cameron Levins of Black Creek, BC and Mohammed Ahmed of St. Catherines, Ontario.

During the 2010 Delhi Commonwealth Games, the 10,000m was won by Ugandan Moses Kipsiro in the time of 27:57.39. The second place finisher was Daniel Lemashon Salel of Kenya who recorded a 27:57.57 and the third place finisher was countryman Joseph Kiptoo Birech in 27:58.58. These times are well within Ahmed’s and Levins’s ability, but as with most any championship race, the two Canadians will likely have to deal with great changes in pace in a tactical racing style, as opposed to seeking a fast finishing time, exclusively.

Below are the top-10 all-time results accomplished by five different athletes, four times by Kenenisa Bekele and two entries by Haile Gebrsellassie, both from Ethiopia.