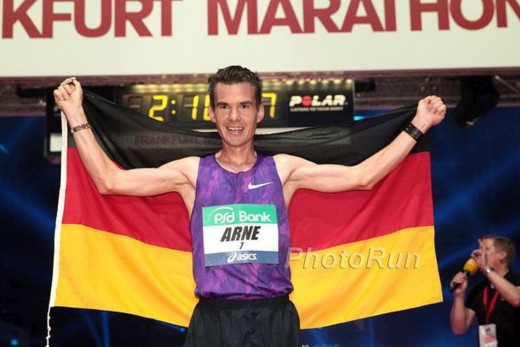 After 27 years of waiting, there’s a new name on the German marathon record as Arne Gabius returned in triumph to the scene of his debut at the distance last year and ran 2:08:33 for fourth place in Frankfurt. That was 14 seconds faster than the 2:08:47 set by Jörg Peter in Tokyo in 1988. The race was highly competitive with the quality to match. Ethiopia’s Sisay Lemma carried off the top prize with 2:06:26 ahead of the Kenyan duo of Lani Rutto (2:06:34) and Alfers Lagat (2:06:48). Arne Gabius in fourth place finished 59 seconds faster than his debut at the distance here last year and was also comfortably inside the German Olympic qualifying time of 2:12:15.

The Ethiopian women, as expected, dominated the race and claimed all the podium places. But they produced a major surprise in that the winner was Gulume Tollesa in 2:23:12. She chopped over six minutes off her personal best, chased all the way to the finish line in Frankfurt’s Festhalle by Dinknesh Mekash who was credited with the same time. Koren Jelela finished third in 2:23:52. In the race for the national championship, Lisa Hahner won with 2:28:39 for sixth place but that was six seconds outside the national qualifying time for the Olympics.

The race presented drama on four fronts: the contest for the men’s title plus the attack on the German record while the very close women’s race was complemented by the domestic quest for the Olympic qualifying time.

The Frankfurt Marathon is an IAAF Gold Label race, the highest category of road event. The 34th edition attracted 14,565 runners on the start line with a total of 25,547 participating in all events of the race day programme.

A 17-strong leading group, including Arne Gabius, went through halfway in 63:22 after starting in temperatures between 13 and 15 degrees Centigrade, cloudy and with barely a breath of wind. The halfway split meant the pacemakers were right on schedule. What proved to be the first decisive move came at 25 kilometres as Gabius lost contact and Sisay Lemma raised the pace dramatically and broke away with pacemaker Wilfred Kigen at 28 kilometres. Lemma’s split for that last kilometre was 2:44 and the Ethiopian proceeded to run each of the next three km in 2:49, and two identical 2:52 splits. By 30 km he had a lead of 24 seconds ahead of a Kenyan quartet comprising Alfers Lagat, Lani Rutto, Norbert Kigen and Suleiman Simotwo.

The outcome appeared beyond doubt but Lagat and Rutto had other ideas with around four kilometres remaining, catching up with Sisay Lemma who had clearly slowed down. A close finish seemed in prospect till the final kilometre when Lemma, this year’s Vienna City Marathon champion, launched the final attack. “I’m delighted with my win but I really wanted to run 2:05,” said the 24-year-old champion.

In his pursuit of the German record, Arne Gabius went through an ordeal which so many marathoners experience, sooner or later. “The second half was damned tough and it felt like chewing gum, it seemed never to end, it hurt all right. Now I know what it means to run a marathon,” said the new German record holder. Ultimately it was touch and go whether he would break the record but the resilient Gabius gathered sufficient strength to take 14 seconds off Jörg Peter’s time in 1988 and open a new chapter in German marathon running. Considering this year’s leading men’s times in the marathon and that each nation is permitted only three entries for the Olympic Marathon in Rio next year, Arne Gabius currently stands 12th in the rankings.

This was a thriller. Seven runners went through halfway in 1:11:29 and by 30 km the group was reduced to four contesting victory: the Ethiopian trio of Gulume Tollesa, Dinknesh Mekash and Koren Jelela along with the Russian Sardana Trofimova but the latter dropped back over the next 5 km and finished fourth in 2:24:38.

At 40 km the same Ethiopian trio were still together but then Gulume Tollesa broke away and appeared to have victory within her grasp. Dinknesh Mekash had other ideas and made up the leeway so both entered the Festhalle stride for stride. Mekash edged ahead but Gulume summoned her reserves and won the sprint, achieving a massive personal best of 2:23:12. Her previous best of 2:29:40 had left her name outside the list of contenders. Koren Jelela finished third in 2:23:52 she continued her international return after maternity. The women’s champion had been confident of a good performance, but had not expected outright victory. “I thought I could finish among the first three since my training had gone very well but I never dreamed I would win,” reflected Gulume Tollesa.

While Arne Gabius was also able to include the German men’s title among his day’s honours, Lisa Hahner proved she was back in competitive shape after two years blighted by injury. She won the national women’s title in 2:28:39, just nine seconds outside the Olympic qualifying standard of the German Federation.