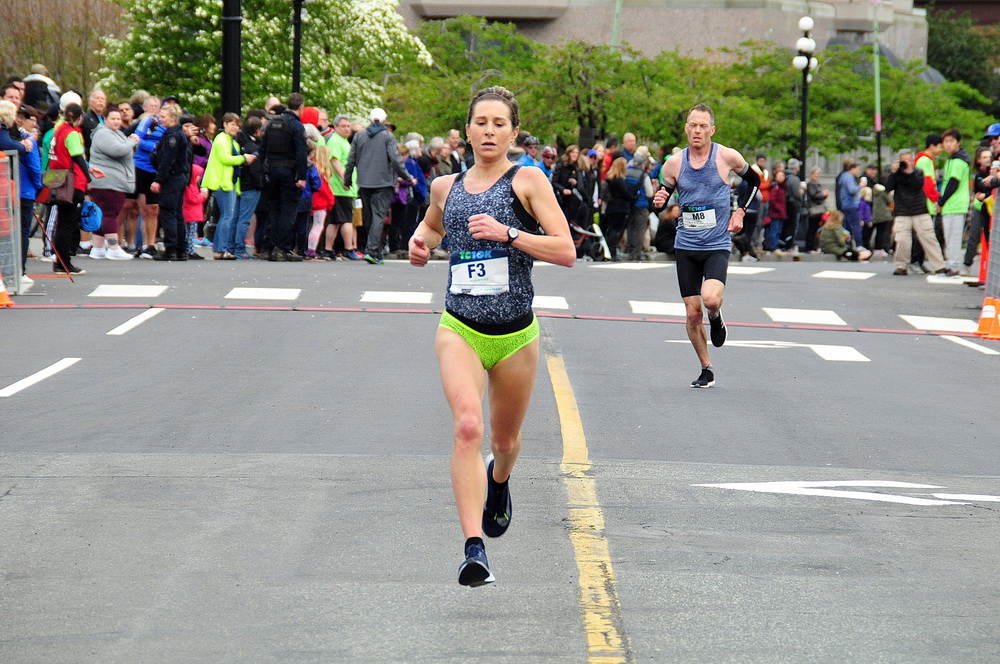 Vancouver’s Dayna Pidhoresky defended her title at the 2018 TC10K in Victoria.

In a replay of 2017, she was up against four-time champion Jane Murage of Eldoret, Kenya. At 5K, Pidhoresky led by 37 seconds, she held the superior pace and finished 1:17 ahead. Pidhoresky recorded a 33:20 finish time – nine seconds off of her best set the week prior at the Vancouver Sun Run.

“I am pretty happy with the race. The weather was perfect, I wish I could stay a couple more days, it is so nice over here on the island,” said Pidhoresky.

She is gearing up for a pair of half-marathons including one in Indiana next week and the Canadian Half Marathon Championships in Calgary on May 27.

Asked if she will be looking for any particular time in Indiana, she said, “Well I don’t think I can run the current national record of 1:10:08, but maybe beat the previous record, which is 1:10:47.”

The Indiana race is called the 500 mini-marathon and is run ahead of the legendary Indianapolis 500. It is a popular event with 35,000 registered, which makes it the largest half-marathon in the US.

Pidhoresky won the historic Around the Bay 30K three weeks ago. She is the first woman to win it four times.

University of Victoria Vike Alison Hooper finished third in the time of 34:50, a 2:12 improvement over her 2017 performance and a 16-second improvement on her Sun Run from last Sunday.

In the men’s race, a new winner was declared in Kenyan, Haron Simra, who finished in the time of 29:49, 10 seconds ahead of defending champion Daniel Kipkoech, who won in 2016 and 2017. The third finisher and third Kenyan was Stephen Kersh stopping the clock at exactly 30:00.

Not racing for three years, Simra hit his stride early by winning his first race at the 2018 Around the Bay 30K.

At the 5K mark, the race was down to Kipkoech and Simra at the beginning of the only major hill on the course. Just two seconds back were Calgary’s Matthew Travaglini and Paul Kimugul. The race came down to the final kilometre where Simra pulled away for the win.

“Simra was faster. We were together until 9K, then he pulled away. He was stronger today,” shared Kipkoech.

Travaglini was the first Canadian and fourth overall with a finish time of 30:25. One week prior at the Sun Run, he finished under 30-minutes in a 10K race for the first in his career, clocking a 29:49. The former Windsor Lancer will now focus on the 5,000-metre distance for the spring and summer. Travaglini competed in the 2017 IAAF World Mountain Running Championships.

“It was a good race, I am pretty happy with it,” said Travaglini. “Same placing as last year, fourth, but quite a bit faster, 43 seconds I think.”

Travaglini also finished fourth at last year’s TC10k with the same time as the third-place finisher. He finishing fourth at last week’s Sun Run at the same time as the third-place finisher, which is ironic; however, he was assigned bib number M4. It appears that he also finished fourth in a virtual tie (0.3 seconds) with a third positioning at the Toronto 5K in the fall.

The top three masters were Jim Finlayson, Shane Ruljancich and Craig Odermatt, all from Victoria. They finished in 33:23, 34:14 and 34:19, respectively.

Finlayson is coming back from an abdominal injury. It was his second race back, last week he finished in 34:02 in the Sun Run.

The top three masters women were Vancouver’s Catherine Watkins, who crossed the line in the time of 35:18. Heather McDonald finished second in 36:51. The third masters finisher, racing in the 50-54 age-group was Meghan Strothers, who finished in 40:30.

DOWN-AGING: Vancouver’s Jim Swadling took the provincial record for 70-74 age-group, finishing in 40:19. Swadling beat 7,699 other runners, finishing 111th overall out of 7,810. Also in the race was the legendary Maurice Tarrant, who at 87 finished every single TC10K to date. Right behind him was 80-something Lenore Montgomery, who finished in front of 2,702 other participants.