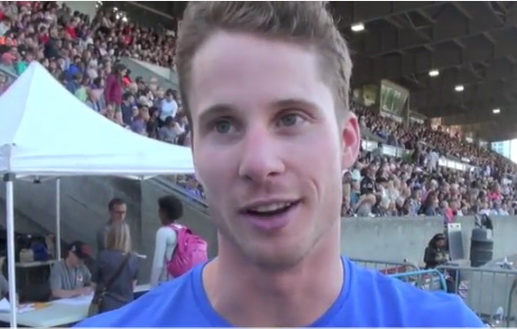 Maracana Stadium is a long way from kindergarten class and a makeshift basement high jump pit in small-town Ontario, but Derek Drouin had a seamless night on the world’s biggest stage today in Rio de Janeiro.

The Corunna, Ontario native won the gold medal today at the 2016 Rio Olympic Games in the high jump competition. He was the only competitor to clear the height of 2.38-metres.

“Over the past two weeks I have been much more confident than I think I have ever been,” said the 26-year-old world and Olympic champion. “I wasn’t anxious or nervous coming out here at all, I was really excited so it wasn’t a surprise that I was going to jump that high, but you never know how anyone else will do.”

Qatar’s Mutaz Essa Barshim earned the silver medal by finishing at the height of 2.36m, while Ukranian jumper Bohdan Bondarenko topped out at 2.33m.

Bondarenko had passed over 2.36m after clearing 2.33m, so that he could leap-frog Drouin and Barshim, but to no avail, he missed the height and was faced with skipping 2.38m to go for 2.40m as tying Drouin at 2.38m would result in him sitting in silver medal position and force Barshim to attempt a higher jump, making winning no more likely.

Drouin didn’t take the bait and stuck with 2.38m and waited, pacing the high jump area in anticipation of Bondarenko’s leap at 2.40m.

Bondarenko failed, moments after Drouin, on his second-to-last jump of the day, cleared the 2.38m.

With gold already in-hand, at first Drouin waved off a subsequent jump, but then moved into position and attempted the height of 2.40m to break the Olympic record of 2.39, but missed.

Drouin is the 2015 IAAF World Track and Field Championships gold medallist, Rio Olympic gold medallist and Canadian record holder at 2.40m. Only six men have jumped higher than Drouin in history, he beat two of them tonight. Barshim’s personal best is 2.43m while Bondarenko’s high all-time jump is 2.42m.

He also owns a bronze medal from the 2012 London Olympics and the 2013 Moscow IAAF World Championships.