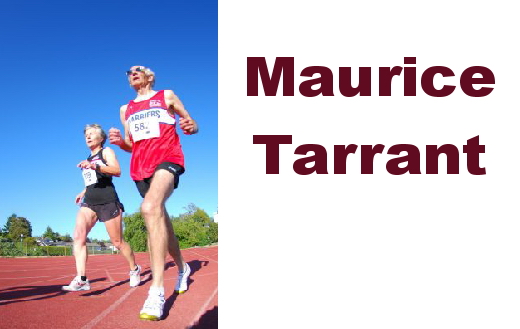 Written in 2016 for Your Magazine of Victoria, BC

Maurice Tarrant celebrated his 85th birthday with family and friends on January 4th. Most people would think that he has long since slowed down, put his feet up and started to relax; perhaps a good 20 years ago. He does indeed take the time to relax, but he hasn’t slowed down. In fact, in a way, he has gotten faster as a runner. Now that he is 85, he will take a run at several more Canadian records in the 85-89 age-category.

If you ask Tarrant about his records, he may start talking about his family instead. He is a family man first and an athlete second, but he doesn’t deny his talent, so he races with his family and friends too. You will often see his daughter Claire warming up and racing alongside or near him on the roads and tracks of Greater Victoria. He has too many friends to mention, but many of them share his joy of racing.

Tarrant has bettered 70 national age-group records and at least one world record for the mile, which he ran against the advice of his physician. “My doctor was concerned about my heart and I have had a bit of a stomach issue, but I am good to chase the mile record today,” he casually told me moments before his mile race five years ago.

In running, there exists an age-grade calculator (WAVA), which provides a conversion for the time that a person may have run during their peak as a youth from a run result that they attained later in life. The conversion times for Tarrant’s performances are fast and furious.

Five years before that particular encounter, at 75-years-of-age, Tarrant ran the Bazan Bay 5K in Sidney, finishing with a result that when calculated with the WAVA algorithm works out to a stunning 14:17, which was faster than past winners, who are a collection of international athletes. In fact, 14:17 would be the open course record by nearly half a minute, at that time.

He has been at this assault of the Canadian age-group records for some time. Twenty-four years ago he took down the national 65–69 age-group 10-kilometre record, crossing the line in the time of 37:29, which translates, according to the age-grade calculations to a 29:22 finish time. At the age of 58, he ran a half-marathon in Seattle in the time of 76:20, which works down to a 64:33. These are standards that only a handful of Canadian athletes can manage in the open category.

consecutive Vancouver Island Race Series races, which includes distances as short as five-kilometres to the half-marathon (21.1K). He has accomplished all of this even though he took a long break from running to raise his five children.

What is the secret to his continued success?

Tarrant grew up active; he ran competitively through his youth, so I asked him, “during your early years, did your high level of physical fitness allow you to make a smooth comeback at middle age?”

“Yes I believe so. By the age of 18 I was playing rugby in the winter and rowing during the summer in bow position for coxed fours. In rowing we trained six days a week and were well coached, resulting in several successful years in this sport. Another factor that helped in my development was that my family never owned a car, so I walked, took the bus or ran everywhere, including home from school at the age of 10 to deliver newspapers!”

Tarrant hales from Devon, England. It is likely his early conditioning gave him the ability to make steady progress from running a half-mile loop on his lunch breaks at work, building up to 80-kilometres per week minimum (50 miles), including a 16-to-20 mile (26-32K) long run every-other-week.

He was a competitive rower too, representing Paignton Rowing Club; he helped his crew win the British junior championships.

Tarrant joined the Royal Air Force at the age of 21. The following year he was talked into entering a half-mile track race where he finished second. He ran competitively in cross-country, track and road races, representing Devon in an inter-county meet at White City. He found road running as fun then as it is now.

He met Phyllis, his wife of 63 years, at 18-years-of age. They have five kids Mark, Gail, Phillip, Claire and Lisa and 10 grandchildren.

When I asked him about the support he received over the years for his running endeavours, he said, “I could not have stayed so fit and well without the support and love from my partner in life. Phyllis not only supports my running but she keeps me healthy by baking and cooking meals full of nutrition and has plenty of fruit in the home at all times.”

The Greater Victoria race schedule starts in earnest on the second Sunday of January each year with an eight-kilometre road race in Saanichton and will continue into summer with each weekend offering race opportunities for Tarrant to break national records while spending time running with his family and friends nearby.