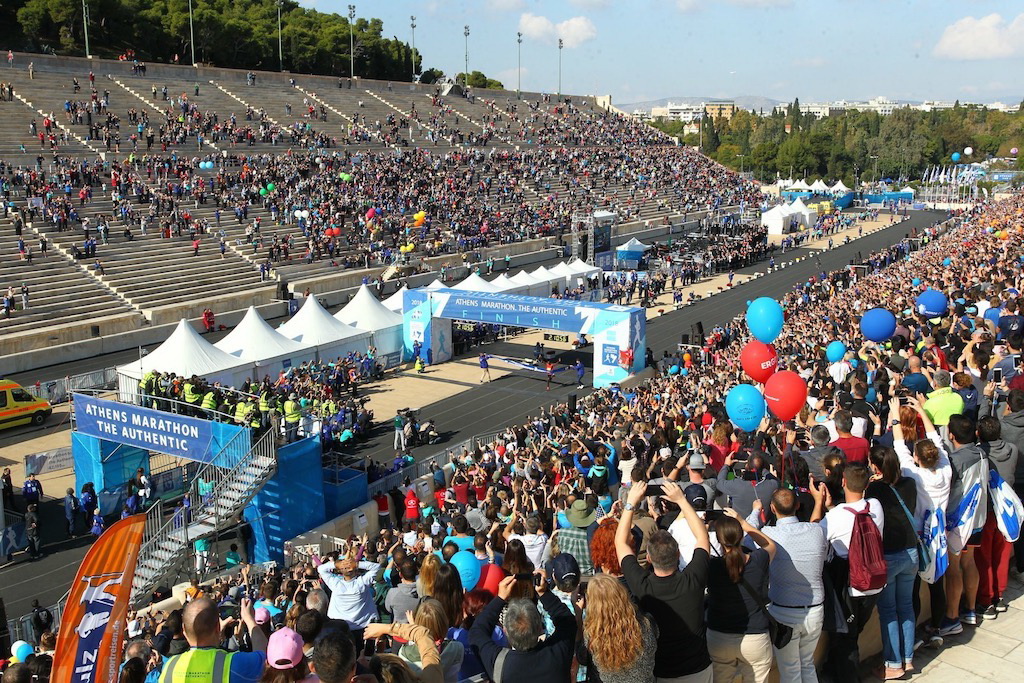 The development of the “Athens Marathon. The Authentic“ appears unstoppable. The birthplace of the marathon is also increasingly at the heart of contemporary running. Over 2,500 years after the Battle of Marathon in 490 BCE and almost 125 years since the first Olympic Marathon at the start of the modern Olympic era in Athens in 1896, the Athens Marathon. The Authentic has once again achieved a significant participation record: the Hellenic Athletics Federation SEGAS, organizers of the 37th edition of the race, expect for the first time to welcome 20,000 marathon runners from around the world to run on the original course from Marathon to Athens. Adding running events at shorter distances a total of more than 60,000 athletes will run through the Attica region and Athens. This record total puts the Authentic Marathon among the biggest running events anywhere in the world.

The marathon race begins in its historic setting of the town of Marathon. After a fairly level start which takes in a detour around the memorial to the Battle of Marathon, the infamous 20-kilometre climb follows. Then the course leads the runners down to Athens and to the finish line in the old Panathenaic Olympic Stadium. The beautiful Marble Stadium of the first Modern Olympic Games of 1896 is the finishing point for all competitions. The marathon course of 42.195k, officially measured by the IAAF and AIMS, is practically identical with that of the 1896 Olympic Marathon and corresponds exactly to the course for the 2004 Olympic Games in Athens. No site could have more marathon history. For this reason the Athens Marathon. The Authentic was the first marathon along with Boston to be awarded the IAAF Heritage Plaque of the International Athletics Federation in March this year.

This unique race is attracting ever-growing numbers of runners to the first-ever marathon event. Ten years ago there were 10,000 athletes running through Athens in races of various distances, but in November this year, there will be more than five times as many. The marathon race imposed a limit for this year of 20,000. At present 500 places remain available but are likely to be soon taken.

An innovation this year is that the 10k road race, which hitherto has been staged in parallel with the marathon, will now be run in the early evening on the previous day in central Athens. The participation limit is 12,000 and in this event there are also still 500 places available. 20,000 runners will be on the start line on Sunday morning in Athens for the 5k event. This race still has 1,500 places available. Another 8,500 participants are expected in the various fun runs, especially for kids and Special Olympics athletes, held in conjunction. For more information and to register entry online, please go to: www.athensauthenticmarathon.gr

Along with the expansion of the competition schedule to include Saturday which will turn the entire weekend into a festival of running, another innovation is that the Marathon Expo where start numbers will be distributed will this time open already on Wednesday, extending the duration of the “Athens Marathon. The Authentic“ to a five instead of four-day program.

Together with the Association of International Marathons and Distance Races (AIMS), the Hellenic Athletics Federation (SEGAS), will once again stage a gala on Friday evening before the Marathon and an international “Marathon Symposium“ on Saturday morning. During the course of the Gala the male and female elite marathon runners of the year, the male and female winners of the annual “AIMS Best Marathon Runner” Award, will be announced. In the afternoon of Saturday, race directors of more than 70 international marathon events along with local sports celebrities will attend the annual Marathon Flame Ceremonies taking place inside the archeological site of Marathon Tomb at the town of Marathon.

Every marathon runner who crosses the finish line of the Athens Marathon. The Authentic in the Panathenaic Stadium on November 10 will receive the first medal of a new series. The concept for the medals covers a period of eight years and will reflect the history of the marathon race. This year’s medal will show the Battle of Marathon. More details about this series will be announced in due course.

More information and online entry are available at: www.athensauthenticmarathon.gr