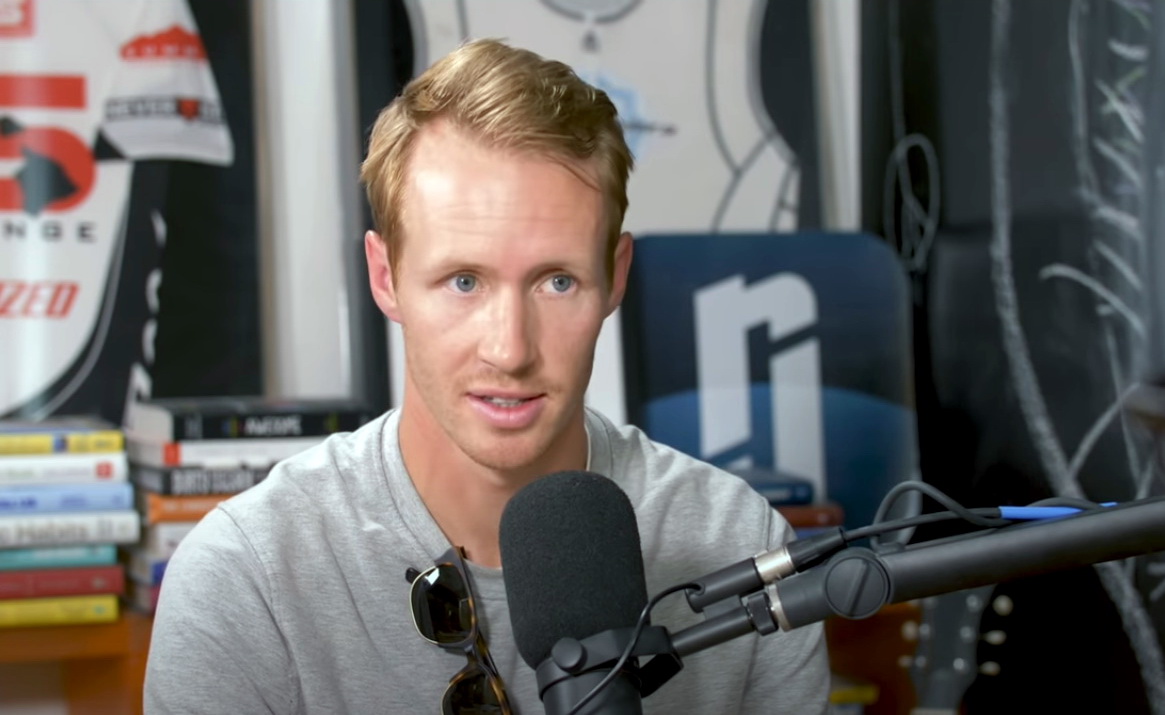 Scott Fauble is an American distance runner who initially experienced success while attending Wheat Ridge High School in Wheat Ridge, CO, a suburb of Denver. He continued to run well during his NCAA career at the University of Portland.

At Portland, his best event may have been in cross-country. During his senior year, he finished 12th at the 2015 NCAA Cross Country Championships helping the Pilots to their first-ever podium finish at the event. They took team bronze.

The now 29-year-old debuted at the 2017 Frankfurt Marathon finishing in the time of 2:12:35 — an impressive first go. He ran at least three marathons in the 2:12 range, however, his best to 2:09:09 from the 2019 Boston Marathon, where he finished seventh. In that race, he finished just 1:15 off the lead runner Kenyan Lawrence Cherono. Fauble was the first non-African across the line, narrowly beating out fellow American Jared Ward, who clocked a 2:12:25 finish time.

Both Ward and Fauble will be racing in The Marathon Project happening December 20 in Chandler, Arizona.

Christopher Kelsall: Growing up in Wheat Ridge, CO, was it just a natural thing to be outdoors and being into endurance sports? Your high school looks like it was less than 5K from the mountains. Did you spend much time running on those trails?

Scott Fauble: I mean, WR is a very typical suburban town — so there were definitely places to run and be outdoors but I don’t think that there was some special connection between me growing up around there and being active. I just loved playing sports — any sport, really.

CK: How was Wheat Ridge High School for your development as a runner?

SF: Wheat Ridge was huge for me, in terms of developing as an athlete. The coaches there are an amazing couple. They definitely had all the technical knowledge of training a high schooler could want. But they were also deeply committed to the team and just wonderful people. It was a great place to be a young athlete. We had a really good team and I got the opportunity to be competitive and really mature as a competitor from a young age.

CK: Sounds ideal, how did you get your start in the running? Where your parents athletes or did you just run cross-country like many kids do and found that you had talent?

SF: I played everything as a kid — soccer, basketball, tennis, rugby, whatever. And my mom would sign me up for these summer camps, so she signed me up for track one summer, I think it was right before 5th grade. I won my first two races and ran 6:22 in my first ever timed mile. I think I got down 5:40-something by my first state meet and got second and then as you get older you can’t really do everything anymore and I just kept choosing running over other sports.

CK: After having a strong high school career, you must have entertained several universities. What were the key factors to choosing the University of Portland for your NCAA career?

SF: Yeah, I got recruited by a number of good schools but what made me choose Portland was Coach Conner. We gelled immediately on my visit there and I appreciated that he was going to be there for my whole career — which I didn’t think was the case with the other coaches I met with.

CK: Chandler offers a fast course. Do you feel that your Boston performance was more indicative of how you will fair on Dec.20?

SF: I don’t really know. The training was different. When we got ready for Boston, we were doing more change of pace work, more hills. We were getting ready to try to run up front at Boston. Which is kind of different than the challenges of The Marathon Project where we’re going to try to get locked into one fast pace and try to really crush this thing — time-wise.

CK: Can you take me through your Boston performance?

SF: Oh, that would take too long and I did a ton of interviews about that when it happened. If anyone is interested in that story there’s a bonus chapter in Inside A Marathon — my book with Ben Rosario. Or you can listen to one of the many podcasts I did after the race like Rich Roll, Citius Mag, or The AM Shakeout.

CK: During the 2020 Olympic Trials Marathon, you didn’t have the performance that you were looking for. During the post-race interview, you indicated that you may have used too much energy during the first loop, but your assessment was directly after finishing. Now that some time has passed, do you have a better perspective on what happened?

SF: Yeah, it definitely wasn’t what I think I am capable of and definitely not what I was hoping for. I think a couple of things happened. I missed about 10 days of training with sickness in January, so I definitely didn’t step to the line with a full deck. But I also just didn’t race well. I wasn’t relaxed in the first 10 miles and then I was too far back in the group when the big moves were being made. So, those last 8 miles or so I was kind of on the ropes and fighting a headwind and alone and I just couldn’t get back on terms with guys like Jake Reilly. I still fought really hard and was on 5-minute pace for 23 miles, but it just wasn’t enough. It wasn’t my day.

CK: Regarding training, what have you done differently for this marathon? How has this cycle gone for you?

SF: This cycle has gone well. I don’t know that I have had those huge home run sessions like I had before Boston and a few times before the trials. But this has definitely been the most consistent block I’ve had. Haven’t really had any stinkers.

CK: Fellow American Jared Ward was just announced to compete in the race. You finished just ahead of him in Boston, but he owns a better non-Boston personal best. Will you be working together in Chandler at The Marathon Project, or are both of you ready to go to the well to beat each other?

SF: Non-Boston personal best? What does that mean? Is Boston not a legitimate course?

I am of the opinion that resumes don’t matter when the race is happening, so I don’t really care about anyone in the race’s credentials. We’re racing. I am not going to help anyone. I am trying to win. I’m sure the front group will be full of people I consider friends — Jared, Martin Heir, Noah Droddy, Scott Smith, Rory Linkletter — but if I have a shot to win, if I am in the lead group at 23 miles, I’m gonna try to crush those guys and they’ll be trying to do the same. We can be friends again after the race.

CK: Super shoes are a hot topic right now. You signed with Hoka in 2015. In your opinion are they keeping up with adidas and Nike? Which model will you be wearing in Chandler?

SF: Yeah, of course. HOKA is an awesome brand. They make awesome shoes and have been a wonderful company to partner with! I’ll be wearing the Carbon Rocket, which I think is as good or better than any other shoes on the market.

CK: Having discovered that you are a movie buff, I heard in one interview you mentioned Once Upon a Time in Hollywood by Quentin Tarantino. I think that was a great movie especially with all the nuances that were involved in making the film.

How would you compare the homage to Hollywood up against Bradley Cooper’s A Star is Born?

SF: The movies are just different. They deal with similar themes — like what it means to be a star and the toll that can take on a person and how stardom can change as one’s career moves forward. But I think the movies are vastly different.

A Star Is Born is a realistic portrayal of a relationship that is marred by substance abuse. OUATIH is not that. It’s sprawling, it’s not bound by rules or history. The point was to be really entertaining and smart. In a lot of ways, Tarantino was flexing with that movie.

CK: Agreed, however, he did use his freedom of storytelling to change history with the Manson story. What about Tarantino’s other later works like Django Unchained and Hateful Eight. Did you enjoy those movies as much?

SF: I think Tarantino’s movies can be put into three categories: 1. masterpieces 2. entertaining movies that you can re-watch over and over but aren’t masterpieces and 3. misses. I think Hateful Eight was a miss and Django goes in Category 2. I like that movie a lot. I have probably watched it 10 times. But, it’s no Inglorious, it’s no Reservoir Dogs, it’s no Pulp Fiction.

CK: Have you dug into the Wes Anderson catalogue? How about his narrative style of writing?

SF: You know, I wouldn’t say that Wes Anderson is my favourite. I know that’s not a popular opinion but a lot of it is just so dry.

CK: Okay, enough with the movie talk, well, except for your pick for best running movie all-time?

SF: Oh, easy, Across the Tracks. Like, have you ever seen Brad Pitt’s face and body and aura and general presence?

CK: Yes, Fight Club, but he didn’t look like a runner there. Obviously, your focus is on Dec. 20. Are you going to exclusively focus on the marathon going-forward or do you have any other goals?

SF: Yeah, I have lots of goals outside of the marathon. I’d like to set an American record in something. I’d like to win a national championship on the roads. There are some iconic road races that I would like to win or at least podium in.