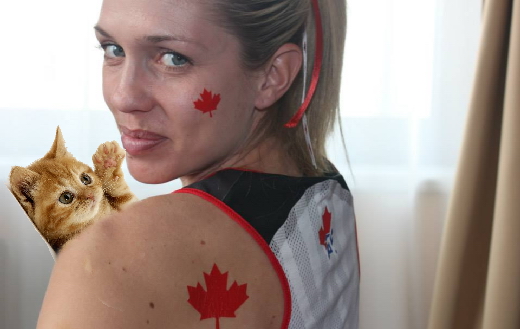 Disclaimer: The views and opinions expressed in this article are those of the author and do not
necessarily reflect the opinion or position of Athletics Illustrated or affiliated online publications.

Natasha Wodak of Vancouver is not only Canada’s all-time fastest runner in the distances of 8-kilometres (road running) and 10,000-metres in track racing, she is the second fastest all-time in Canada at the longer half-marathon road race, which is run over the distance of 21.1-kilometres. She is that fast. She is also one of Canada’s all-time greatest spinster cat ladies; she just loves cats.

The lonely long-distance runner loves cats so much she spends all of her spare time volunteering at a local cat shelter called Vancouver Orphan Kitten Rescue (VOKRA), nose-nosing kitties.

During her spare-spare time she works at a restaurant as a hostess to pay vet bills and support her love of cats as well as her long-distance running career.

The governing body of the sport of running in Canada is called Athletics Canada (AC). Apparently the important people who work at AC, commonly referred to as ACholes, hate spinster cat ladies.

Wodak applied to receive money to support her cat-loving career, but was turned down. The funding is called “carding”. “Ms. Wodak believes that “carding” is an acronym for cat hording. We do not disperse funds for cat hording,” shared an ACholes spokesperson.

*“I just love cats, yes, I am a cat lady,” shared the spinster also known as “Tash, the fast cat-lady”.

The fat cats at AC have turned down other well-known spinster cat ladies; Wodak is not the first. For example, Diane Cummins, former national record holder in the 800-metre distance loves cats too. “I love cats. I have four cats and I love them equally,” shared Cummins, when asked about her complicated dealing with the fat cats at AC.

*Lanni Marchant, Canada’s all-time fastest runner in the distance of both the half-marathon and the marathon has had her inclusion to Team Canada for international competition put through a lengthy appeal and arbitration process only to be thwarted, but she actually doesn’t love cats. 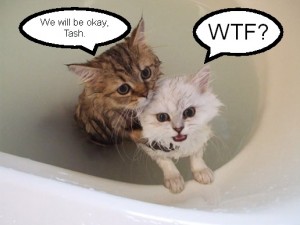 Marchant said, “I have been known to rattle a box of Meow Mix to feed kitties, I do it in exchange for a couch for the night, while on the road racing”.

It is clear that Marchant’s willingness to rattle Meow Mix boxes on the road for a night on a couch confused AC and therefore was treated as a spinster cat lady too. The matter is now settled and she is currently on the list of eligible athletes to receive funding.

While busy snuggling her cheeks into the soft-as-baby-down tummy of a warm and play-full, red and white Abyssinian kitty, Tash said, “And where would I be without you, my red and white little friend. Huh? Give us a kiss then, baby.”

“More like a kiss-off,” remarked the head veterinarian, Per Erik Strom.

*Lanni Marchant and Natasha Wodak did not participate in the article in any way. The information contain above relating to Marchant and Wodak is purely fictional.

No kitties were harmed.