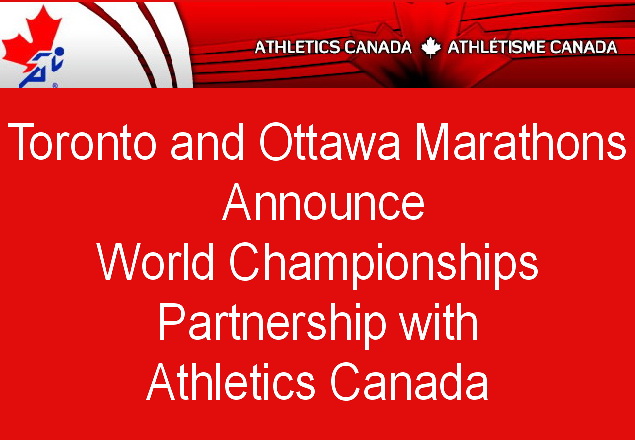 Athletics Canada (AC) is very excited to announce today a partnership with Scotiabank Toronto Waterfront Marathon (STWM) and Tamarack Homes Ottawa Race Weekend which will see funding to help marathoners achieve their goals of participating  at the 2013 World Championships in Athletics in Moscow, Russia.

Alan Brookes, Director, Canada Running Series, “STWM is delighted to partner in this exciting initiative with AC and Tamarack Homes Race Weekend.  It builds on the considerable success we’ve had from the Berlin World Championship Marathon project from 2009.  It is vital for the Canadian distance running community to have ongoing, annual major goals that provide athletes with the incentive to commit, long-term, to the professional training and preparation that is required for success on the international stage.”  Brookes adds, “We look forward to continue working with our national federation to develop similar projects, building depth as well as internationally-competitive men’s and women’s marathoning in Canada.”

“As Canada’s largest running event, the Ottawa Marathon is committed to growing the sport of running and supporting the development of our Canadian athletes,” said John Halvorsen, Chair, Run Ottawa.  “This program has already proven itself – the success of today’s male marathoners is largely attributable to a previous partnership between our two events and AC.  We look forward to repeating this success and to seeing our Canadian marathon team excel at the 2013 Moscow World Championships, and beyond.”