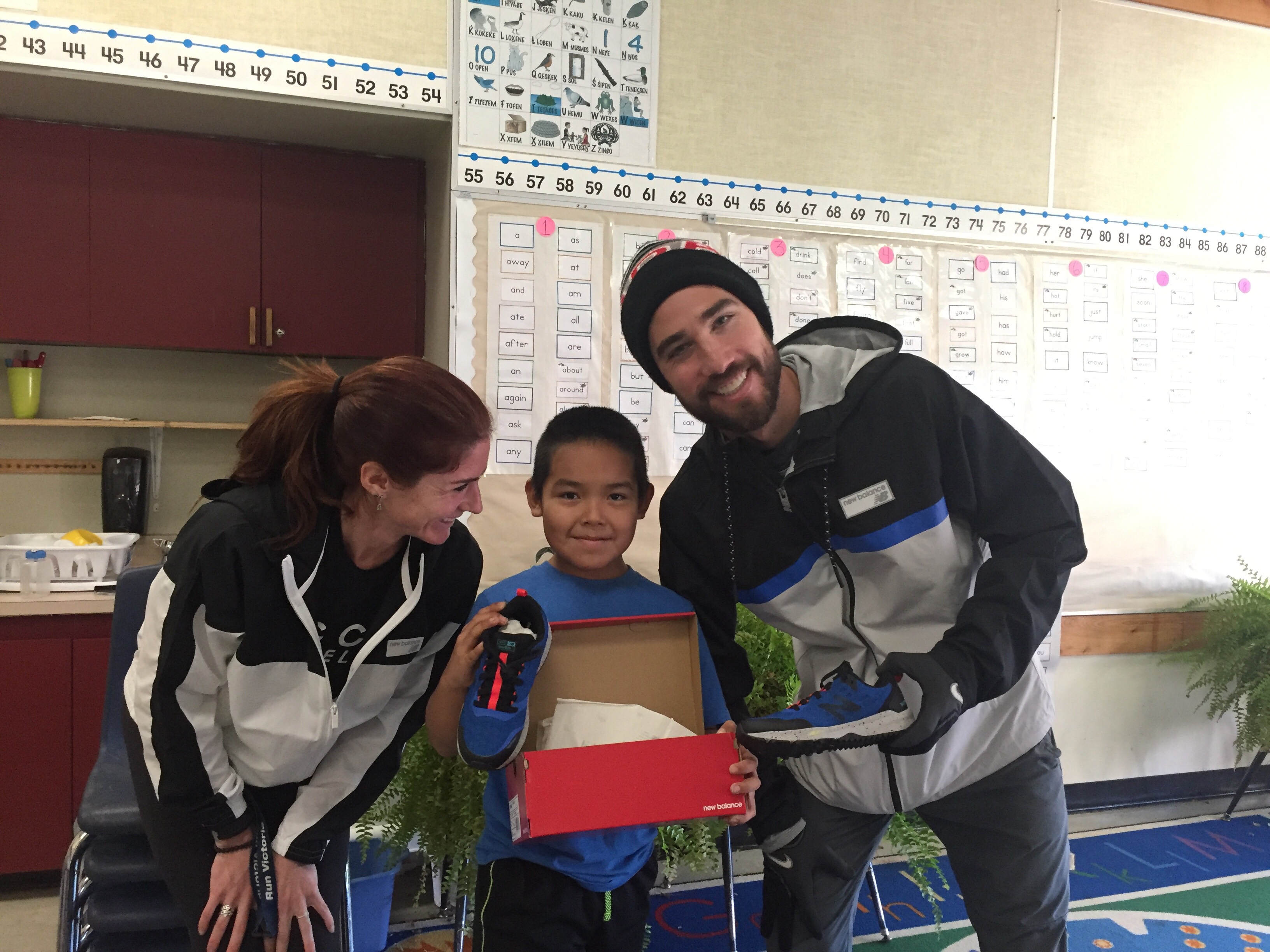 Coach Geoff Harris, a 2012 London Olympian, as well as Rob Denault, Erin Teschuk, Casey Atkin (Triathlon Canada), Laurence Cote, Mariah Kelly, and Vaughn Taylor spent time with students from Kindergarten through Grade 5 on Monday, Nov. 26. They took them through drills, good exercise habits, showed them videos of AC West Hub athletes and Team Canada members training and racing to show what it takes to be an elite athlete.

Grade 2 teacher and sports coach Ms. Sam welcomed the athletes to the school. Asked what she thought the visit meant to the students, she said, “I feel like it means a lot to the school and the children because I don’t think that they ever have the opportunity to have this kind of exposure to these kinds of programs. So my hope for them today is that they will leave feeling like “maybe I can achieve that”, so that’s why I am excited about the visit this morning.”

Ms. Sam coaches to Grade 5 and can only hope that when they leave her and move on to high school, located just down the road, that they continue with sports.

To foster the transition to middle and high school sports, the school has a recognition system, where they award students for participation. Records are kept on which sports they participate in and the hope is that students will continue with their enthusiasm for sports when they graduate.

“In June we have the awards ceremony at the end of each year, one of the other coaches and I sit down and talk about who will receive the Athletic Achievement Award. We will provide awards for Grade 3 to 5.”

The awards are presented by the coaches to athletes in both streams, English as well as their traditional language SENĆOŦEN.

“It’s very exciting for the kids to have the Olympic-level athletes come out and spend time with them showing them what their sport is all about.”

“We are bursting at the seams. The school is near or at capacity and we now need a new track and are getting a new gymnasium starting at the end of the 2020 school year. So the expansion of the school and the gymnasium will happen for next year. And we are really excited about that.”

“Robin”, who works for the school – but not speaking officially – said that that she noticed that there was a lot of excitement with the athletes showing up to work with the students.

With those words, it was clear that a sense of culture and community is important for kids to grow up in; sports participation is a big part of that.

“The kids were asking if we were playing lacrosse,” chuckled 400m sprinter Vaughn Taylor.

Lacrosse, an indigenous people’s traditional game is popular in Western Canada and Ontario. Two versions exist, field lacrosse, which is played in an 11-aside format on a soccer pitch, and there is the box version that is played 5 v 5 in hockey rinks or lacrosse boxes, sometimes referred to as boxla. The field version resembles more closely the original game.

It is played in pockets around the world as well as in the NCAA.

Taylor added, “I felt today like I did when I was a kid and athletes would come to our school and show us drills or show us something new and had goals behind their names. Definitely being a part of this team for Canada has been really awesome for kids, just to be able to relate to them. To instill values and training habits and some core values that are not necessarily taught a lot in school. Getting that through to the children in a fun way was really great to see much like when I was growing up and had role models to look up to. It was good to be a part of that on the flip side, today.”

Taylor, an 18-year-old Regina native, competed in the Youth Commonwealth Games in the 400m event, earning a silver medal. He is currently on the University of Victoria Vikes team.

Winnipeg’s Erin Teschuk, who is getting ready to compete in a 5K road race in the US, as preparation for her upcoming indoor season, described the goal for the visit.

“Our goal today was just to share a little about running and the things that we do to train and just to reach out to students who may not otherwise get an opportunity like this. The plan was to take them through some drills and to show them that running can be fun. It was also a chance to give them the opportunity to learn a bit about training. So we just divided them up into different stations. Mariah talked to them a little about training for track and I showed them some drills, like ladder exercises, where they run between the rungs to work on agility and foot speed and it is just a fun activity,” said Teschuk.

Twenty-five-year-old Teschuk is a 3,000m steeplechaser who competed in the NCAA for the North Dakota State University Bisons. She also represented Canada at the 2015 Beijing World Championships and 2016 Rio Olympic Games.

As for Kelly, she spent more time in the big house (longhouse) running between students giving out prizes for correctly answering questions about training than she did walking them through a slideshow that she had prepared.

“It was truly a fantastic event. The kids had a blast meeting some of our athletes and running through the different stations. We are so grateful that the staff provided us with the opportunity to share our experience with them in hopes that maybe one day some of them will be brave enough to go after their dreams too. Sometimes all you need is for someone to tell you that you can do it.”
“This event would not have been possible without the support of New Balance, who provided 15 pairs of New Balance shoes, Frontrunners, who gave 100 water bottles and discount cards, and 94 FWD the main supporter of our group.”

Kelly is a middle-distance runner specialising primarily in the 1500-metre distance. She grew up in Niagara Falls, ON, and earned a full-ride scholarship to Baylor University located in Waco, Texas, where she earned a health sciences degree.

Part of the promotion was to get the kids interested in the sport of athletics, and more specifically, the 2020 Pan Am Cross Country Cup that is taking place at Bear Mountain Golf Resort on Feb. 29; on leap day.

“It was great to be out and connect with so many students this morning at the ȽÁU, WELṈEW̱ Tribal School,” shared Denault. “Mariah spearheaded this project with the school to help our group bring kids from Kindergarten to Grade 5 a full morning program. I hope that these youth gained insight into the opportunities that running has given us over our careers, and hopefully, it encourages them to stick with the sport!”

Denault, a 1500m specialist, competed in the NCAA for the Villanova Wildcats.

In advance of the Cup, Vic City Elite and AC West Hub are putting on a Youth Cross Country Challenge at the Pacific Institute for Sports Excellence (PISE). The event is happening Dec. 8.

For students around Greater Victoria, there is a nation’s cup competition. Their youth cross-country races will be run in teams named after the various countries in the Americas: South America, the Caribbean, Central America, and North America. For example, St. Michael’s University School will be Panama during the meet.

The Pan Am Cup’s new iteration started five years ago. Victoria will be event number three, but the event history goes back much further – at least an attempt did. In 1972, at Beaver Lake Park in Saanich (part of Victoria), the very first Pan Am Cup took place. In that race was Canada’s Thelma Wright, who is on the 2020 organising committee and works for World Athletics (IAAF) as was American Don Kardong who missed a bronze medal by three seconds during the 1976 Montreal Olympic Games marathon. Watching the races that day was Victoria’s teenaged Ulla Hansen, who later went on to compete in seven world cross country championships during her career – she is also the president of the 2020 organising committee.

The original meet turned out to be little more than a dual between America and Canada. The format was later resurrected in 2015 by the Association of Panamerican Athletics (APA). In 2015 Barranquilla, Colombia hosted in combination with the NACAC championships. The following year it was held in Caraballeda, Vargas, Venezuela and then in 2018 San Juan, El Salvador hosted.

Harris added, “It’s great to get out into the community to do this. We look forward to having a good time at the race on the 8th. We are still accepting registrations, so we hope to see more kids come out.”

Ms. Sam, appreciating all of the excitement and the outreach work by the athletes said, “We will be there for sure. We will take a team. The school is really looking forward to the event.”