Forty years hence since very obvious doping had been taking place, at least in the sport of athletics, with East 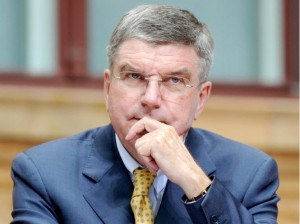 German and Russian and other Eastern Bloc athletes clearly doping under a systematic program, as well as Chinese middle-distance runners during the 1990s and American and Jamaican sprinters over the past 25 years – Suddenly IOC President Thomas Bach announced that stiffer measures must be in place to stop doping.

What brought this on?

Olympic watchers since at least 1976 have mocked the condition of athletes, while clean athletes over time through the media and or biographies have reported and detailed obvious doping.

Measures should have started 40 years ago. Better late than never, except in this case, where a once glorious spectacle has become a shameful embarrassment; a joke.

Bach, speaking here today at the General Assembly of the Olympic Council of Asia (OCA), claimed there is a need for specific procedures regarding testing, compliance and sanctioning issues in order to add transparency to the anti-doping process.

More harmonised conditions must be found between testing procedures in different countries, he added.

Bach also reiterated his view that testing and sanctioning should be made independent from sports organisations ahead of an Olympic Summit in Lausanne on October 8 where this is expected to be discussed in more detail.

He did, however, insist that a revamped World Anti-Doping Agency (WADA) must remain at the forefront of discussions.

The German had not initially mentioned doping challenges in his opening remarks here before being asked for an update on integrity issues by National Olympic Committee of Sri Lanka secretary general, Maxwell de Silva.

“You’re all aware of the challenges we had with regard to the protection of clean athletes before the Summer Games in Rio de Janeiro,” Bach replied.

“The IOC, on very short notice, had to take some preliminary decisions and actions in order to protect clean athletes.

“In these discussions, It has become more obvious that we have to look at the WADA system.

“We have to make new efforts to strenghen the fight against doping.

“In the IOC Session [in Rio de Janeiro last month], we decided that the IOC will ask for a full review of the WADA anti-doping system in order to make it more robust, more efficient, more transparent and more harmonious.

“In this respect, we also said that this has to happen together with WADA.

“WADA is the platform where we can work together with the Governments, with whom we need close cooperation.”