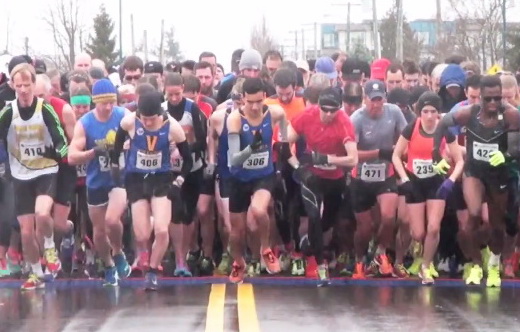 The Synergy Health Management Bazan Bay 5K road race is taking place Sunday, April 10 at 11:00 AM in Sidney, British Columbia. The race venue is located just 20-minutes north of Victoria, the capital of the province. Bazan is the final race of the (usually 8 or 9) six-event Vancouver Island Race Series. Bazan offers potentially the fastest 5K course in Canada and possibly North America.

Without pacers, prize money, or deep fields, past results are fast, but not as fast as they could be. For example, Geoff Martinson, who competed in the 2011 Daegu World Athletics Championships in the 1500m distance, ran 14:12 at Bazan. He did this completely on his own. Asked if he could have run in the 13-minute range if there was a deep field he said, “yes, I think so.”

At the time, Martinson said, “it was a great course, perfect for a fast run given its flatness and the course being in a straight line.”

Olympians often take in the race, for example, Malindi Elmore, who owns the Canadian marathon record at 2:24:50, and finished ninth in the Tokyo Olympic Games marathon has raced the event. She holds the course record at 15:48. Canada’s 2012 and 2016 Olympian Hilary Stellingwerff (1500m, 4:05.08 pb) has also run the event. Simon Whitfield, the Sydney Olympic gold medallist in the triathlon competed at Bazan several times. He won it in the time of 14:37. The age-groupers also enjoy the course.

The course offers a nearly flat layout. However, has a very minor grade going out along the water, the incline is so minor that it is hard to tell that there is one. There is one turn, the 180-degree turn-around at 2.5K. The return offers an almost imperceptible down all the way to the finish. The course runs along the oceanside, and as the long as the winds are calm, there is no reason not to try for a season’s best or personal best or a provincial or national age-group record at Bazan.

After setting the course record, Elmore said, “The course was great. It was beautiful along the ocean. A nice flat course that went by very quickly!”

Registration and course details can be found here>>