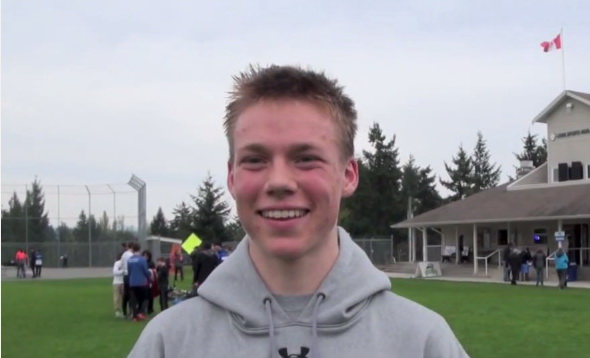 The British Columbia High School Cross Country Championships took place today in Vancouver at Jericho Beach under periods of heavy rain and light to moderate winds. The course was wet and became very muddy by the time the senior boys raced at 12:15 PM.

The winners were Kieren Lumb in the senior boys race, Hannah Bennison in senior girls, while the winners of the junior races were Annika Auston and Jaxon Mackie.

The first race of the day started at 9:30 AM, it was the first ever para-cross country race to be held at the BC Cross Country Championships and included two athletes who ran one lap on the 2.3-kilometre course. The two finishers were Brandon Vanderluit of nearby Lord Byng Secondary and Ges Bushe of West Vancouver Secondary.

The senior girls race was won handily by Vernon Secondary’s Hannah Bennison. Bennison established the lead early and never relented. The remainder of the field fought for second place from the gun. The gap at half-way was approximately 25 seconds on the two-lap, 2.3-kilometre course. The next two finishers were Christina Sevsek who attends Clayton Heights Secondary in Surrey; she finished second in 17:34 and Hannah Henry representing Mount Doug Secondary of Victoria crossed the line in 17:41.

Bennison, who is still only in grade 11 strode in completely composed in the time of 16:41, while many of the girls finishing behind her were grabbing their knees exhausted. Outside of school Bennison trains with the Okanagan Athletics Club and is coached by legendary Canadian distance runner, Malindi Elmore and co-coach, Nate Reiter.

The senior boys race wasn’t decided until the race was over, as Brendan Hoff of Reynolds Secondary in Victoria sprinted to the line with Vancouver’s Kieren Lumb, who attends Lord Byng Secondary. Thomas Nobbs of nearby Point Grey Secondary finished in third position. The three challenged each other throughout the race and neither were giving space to the other, it was a highly competitive race and the three crossed the line splattered head-to-toe in mud.

At 200-metres into the race, surrounded by 238 competitors, Hoff went down hard, but got back up and established a front-leading position before the first of three 2.3K laps was completed.

Asked when he knew he had the victory Lumb said, “When the race was over,” with a laugh. Hoff was satisfied with second. Although he would have liked to have won the race, he feels he has made a statement about his cross ability with a commanding Vancouver Island Cross Country Championships victory one week prior and a close second place finish in Vancouver today.

In regards to the muddy conditions and falling early, Hoff said, “I just picked myself up and got back in the race, I was upfront again pretty quick. The gloves were caked in mud, so I tossed those and just kept going.”

The junior girls positions were established early and the finish of the first few were staggered with Austin of Kitsilano Secondary winning in the time of 18:01. Rhian Paterson of West Vancouver’s Sentinal Secondary School finished in second place in the time of 18:21 and third was Brooke Musshe in 18:31, she was representing Langley Christian School.

The junior boys race was won by Mackie who attends Earl Marriot Secondary of Surrey. He finished in the time of 17:41, but the victory did not come easy as he and Reynolds student Kalum Delaney of Victoria sprinted very hard to the line; they gave it their all and were credited with the identical time. Simon Nemethy of Nechako Valley Secondary finished third in the time of 18:05.

Asked how he felt about ending up in second after experiencing convincing win in the Vancouver Island Championships Delaney said, “It was good. I would have liked the win, but that was a good race, so I am happy with the result.” Delaney also runs for the Prairie Inn Harriers Youth Team and is coached by two-time Olympian Bruce Deacon.

Full team results can be found, here.
Results and result archives are available at www.racedaytiming.ca