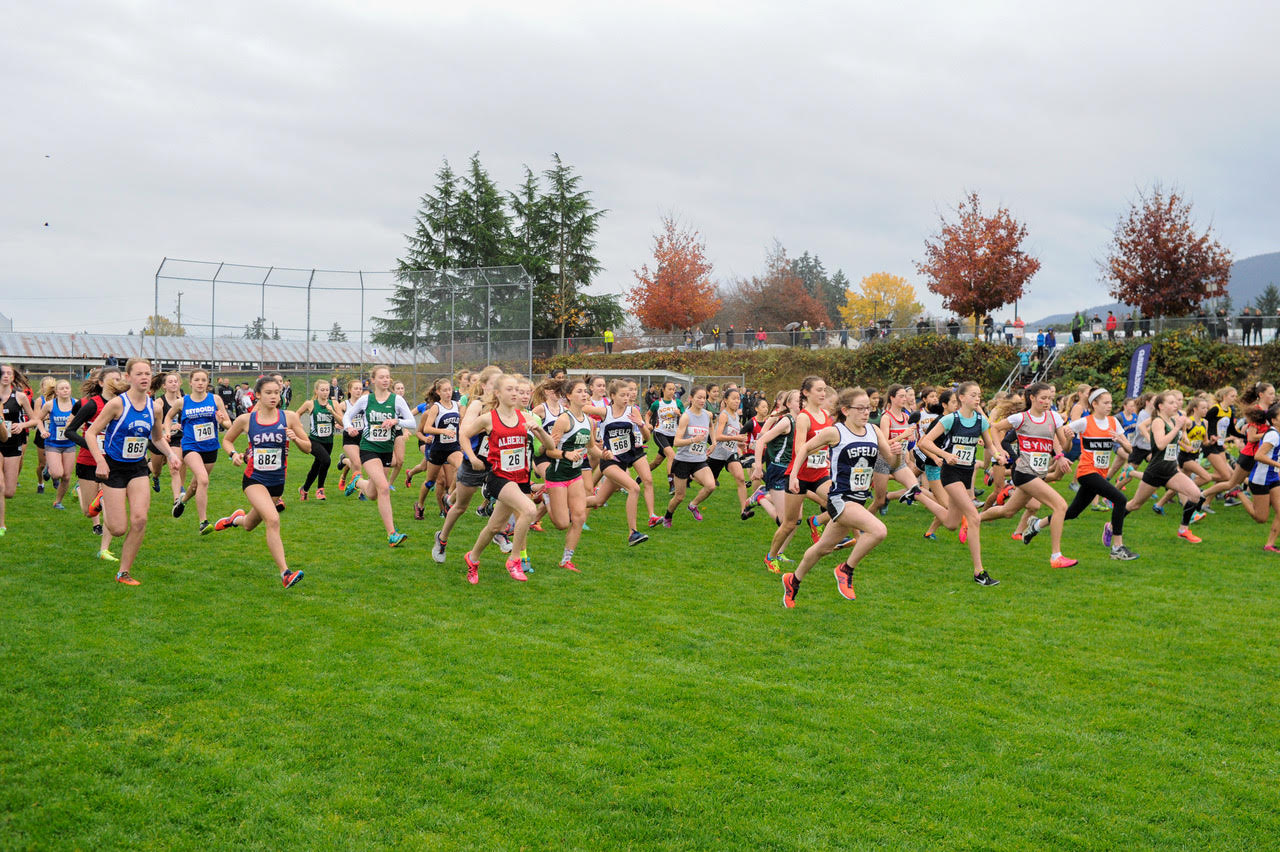 It was a wet and wild one at the 2018 British Columbia High School Cross Country Championships in Nanaimo’s Beban Park on Saturday.

Oak Bay High School in Victoria, BC took the provincial team title for the fourth straight year with a score of 48 in the senior boys race, while Kitsilano (Vancouver) finished second and Mt. Douglas High School (Victoria) finished third, both with 134 points.

The pre-race favourite, Josh Woolgar of Richmond Christian School (RCS) won the individual senior boys title, however, RCS didn’t score as a team with just two athletes running – the four best placing athletes of up to seven on a team count towards team points.

Oak Bay’s top four counters were Findlay Day who finished in third place in the time of 20:55, Jack Bolden finished ninth overall in 21:14, Joe Robertson, who finished second in the Island zone finals behind teammate Jack Amos – not racing provincials – crossed the finish line in the time of 21:41 and in 15th spot. Brodie Cote finished 21st overall in 21:56. Three other Oak Bay runners competed including Michael Barber, Zach Charlesworth, and Jeremy Carder.

“The conditions were very rainy and muddy out there,” said Barber, who ran well despite preferring his specialty of the much shorter 800-metre track distance.

“It was a great event, well organized and there were good attendance numbers,” said Mark Nelson of Race Day Timing. “The first lap was a 400-metre loop of the soccer fields, which was great for spectators.”

Woolgar’s progression under coach Scott Kent of Coastal Track Club has been tremendous. He finished 31st during the 2017 edition of the race while in Grade 11. As a Grade 9 student he finished 194th overall, he finished 94th the following year. 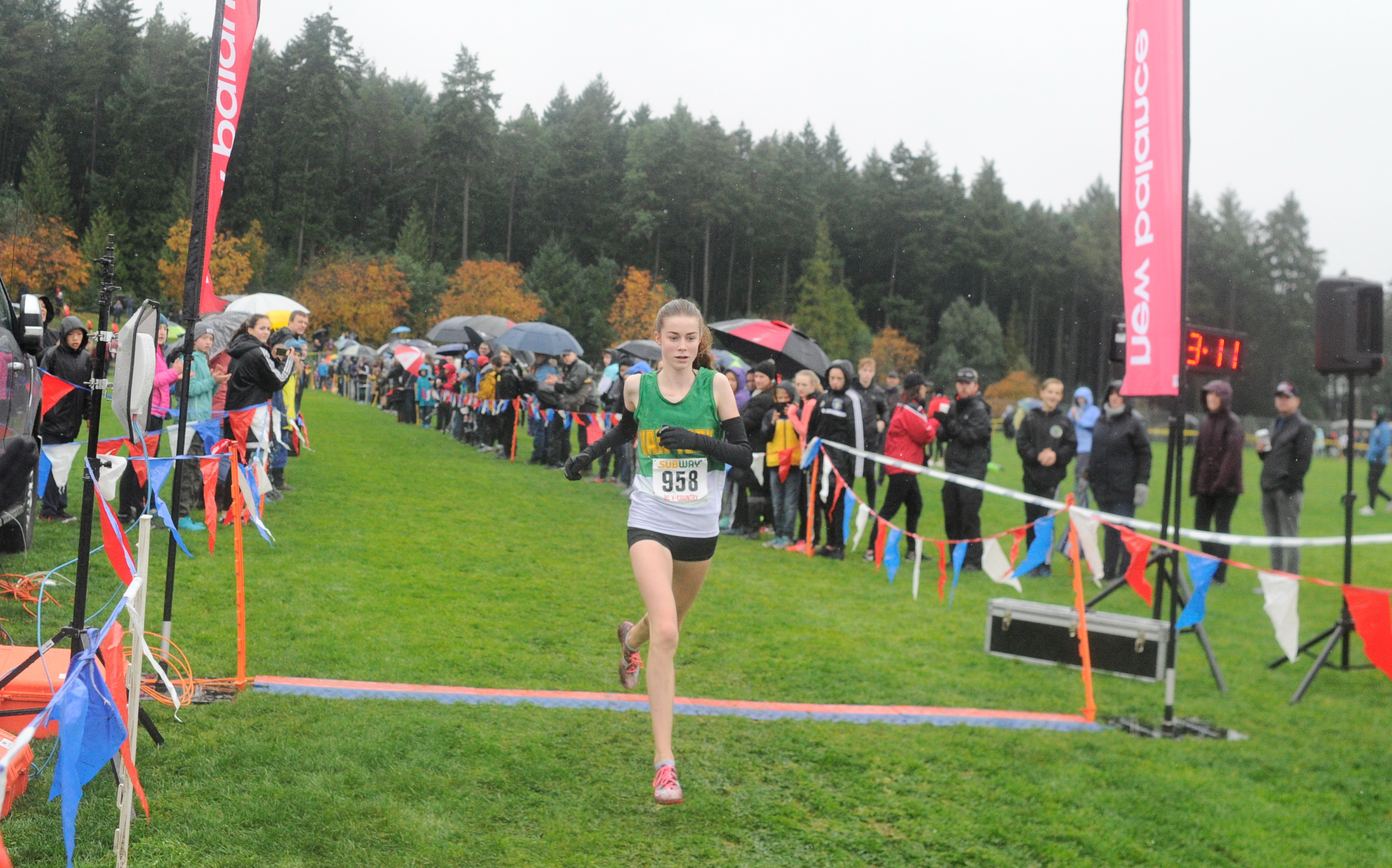 Kendra Lewis from Van Tech, the pre-race favourite won with authority. Photo credit: Rachel Kirk.Asked how the provincial high school race played out, he said, “the race started with a quick first lap but after that, the leaders (Brendan McLaughlin and Keegan Ingraham) started to slow the pace, which made the first lap more of a tempo effort.”

He added, “I led most of the second lap and started to quicken the pace, which caused the field to spread out a lot more.”

Woolgar ran each of the three laps faster as the race progressed. During the third lap there was a pack of about 4-5 in the mix for first. “Liam Dwyer put in a fast surge, which I couldn’t match as I was stuck behind an athlete and the surge was really unexpected.”

Dwyer and Woolgar separated from the field during the final 500-metres as Woolgar chased him down.

“When I saw my coach yelling for me to “go now”, I emptied the tank and managed to pass him with 150m to go and put a few seconds on him with my kick,” added Woolgar.

Woolgar was confident going into the race that he had a chance to win and that it would be competitive.

Two-hundred and 62 athletes finished the race from over 30 BC high schools.

Sentinel High School of West Vancouver took the senior girls race with a low score of just 27 points, to Handsworth Secondary with their 52 and Oak Bay’s 67.

As expected, Kendra Lewis of Van Tech won the senior girls race in the time of 23:12. She finished half-a-minute in front of Ceili McCabe of Little Flower Academy, which is located in the Vancouver neighbourhood of Shaughnessy. Baneet Bains of Princess Margaret School in Surrey crossed in third in the time of 24:01.

Lewis completed the first lap with a seven-second lead over McCabe, she increased that lead to 16 seconds during the second lap. She won with a gap of 30 seconds.

Lewis was coming off wins at BC club championships as well as her zone qualifying meet, where she dominated, taking the win by nearly four minutes.

Two-hundred and 26 athletes finished the race.

Matti Erickson with LV Rogers finished in a dead heat for first with Jonathan Hofer of south Delta. They both crossed the line in the time of 13:42. The third place finisher was Gage Zanette of John Barsby in 14:07.

It was John Barsby Secondary of Nanaimo with a home course advantage who took the team title with a low score of 93 points, Early Marriott of Surrey finished second with 127 and Handsworth of North Vancouver was just four points higher with 131.

Junior boys had the biggest field with 277 finishers.

Madelyn Bonikowsky of South Delta had a sizeable win the in the junior girls race finishing in the time of 15:30, 12 seconds in front of Iris Tinmouth with Mark R. Isfeld High School from Courtenay. Christina Peet Williams finished in 15:59 while representing Chilliwack Secondary School.

There were 239 finishers in the junior girls race.