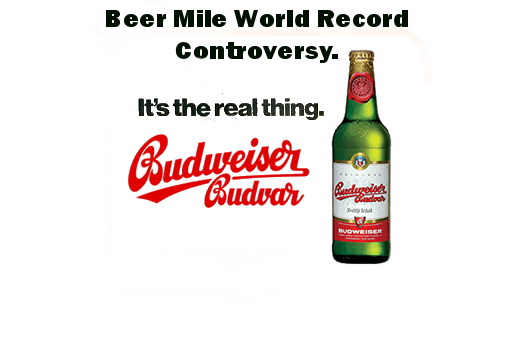 James Nielsen of California raced the Beer Mile Sunday, April 27th in the time of 4:57. Nielsen will forever be immortalised as the Roger Bannister of the Beer Mile, being the first person to crack the 5-minute beer mile barrier. His performance is outstanding; however, his performance will forever be stained due to his choice of beverage. According to the people of Germany – the land of Oktoberfest – he drank “dishwater”.

He popped his first two laps in 63 seconds each, then chased them with a 67-second third lap, and put a cap on the race with a 68-second effort, his slowest of the four trips around the 400 metre oval.

His “beer” swilling performance included outstanding, seven, eight and nine second slams with one final 12-second effort as well. Nielsen declared, “That was really painful.” And so it should have been, considering his choice of beverage.

Nielsen’s “beer” of choice, “Budweiser” does not adhere to the 1487 proclamation of Reinheitsgebot. Budweiser does not qualify as a beer due to their ingredients and brewing process. In fact Budweiser by Anheuser-Busch is not even the real Budweiser!

Budweiser Budvar Brewery is a brewery in the city of Budweis, Czech Republic, which is known for brewing a beer called Budweiser Budvar. While in North America and parts of Central and South America, the beer is known as “Czechvar”, due to a trademark lawsuit settlement with Anheuser-Busch.

Brewing in the city of Budweis dates back to the 13th century. Budweiser Budvar Brewery was founded in 1785. The company began exporting to the United States in 1871, four years before Anheuser-Busch began brewing under the stolen nomenclature of Budweiser.

Budweiser Budvar is one of the highest selling beers in the Czech Republic and exports into more than 60 countries across all continents. In the German market it is the second best sold brand among imported lagers.

German soccer fans who attended the 2006 FIFA World Cup were furious at having to drink the beverage they referred to as “dishwater”. Concerned German soccer fans started a website to protest, they wrote, “Human dignity is inviolable,” quoting the German constitution. The Website went on to call Budweiser “an insult to all true beer lovers” and an “insult to your tongue.”

The previous “official” record, according to BeerMile.com, was the 5:04.9 time set by Australian Josh “Harry” Harris, who used Maxx Dry from bottles, a beer that weighs in with a 5.0% alcohol content by volume. Harris also set the unearthly time of 4:58 while drinking chocolate milk from a cup; a most blasphemous mockery of beer mile traditions. Prior to Harris’s beer mile record the world best was 5:09, which was set by Victoria, BC’s Jim Finlayson. Finlayson utilised Whistler Winter Ale during his beer mile record, which provides a 5.5 percentage of alcohol by volume. Finlayson is also known to have run 5:12 using Guinness, but was disqualified for the low alcohol content.

Established in 1989, the Whistler Brewing Company is a craft brewer, while many craft breweries have come and gone, they continue to be 100% BC owned and 100% BC brewed. They offer authentic and hand-crafted, artisan beers, providing more flavour, character and most importantly they adhere to Reinheitsgebot during the brew process.

Although Nielson’s record is an admirable performance, his record should forever be accompanied with an asterisk and an explanation that it does not fully qualify. While running any beverage mile is difficult at any speed, with any beverage, his should not be referred to as the official world beer mile record. This will demonstrate to prospective beer-miling athletes that to get a head there are no shortcuts to world records.