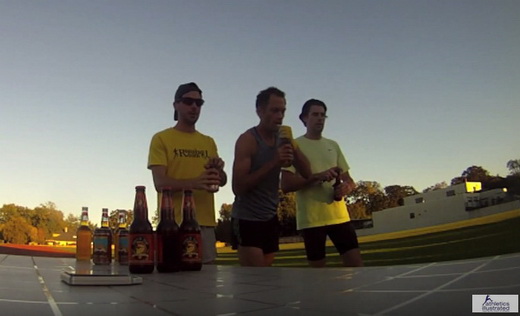 Supermaster beer mile world record holder, Jim Finlayson of Victoria, BC took another crack at beer miling tonight at the Jack Wallace Memorial Track; in fact he went for the two-mile world record. He was looking to go under the current open world best of 13:23, which is held by Aussie Josh Harris – one of the top beer milers all-time with the sixth fastest time in the world at 4:56.2.

Finlayson smashed the world record with a running of 11:39, however, the video will need to be reviewed as he splashed the smallest of beer hiccups before the race was over – not a full-blown spew; he saved that for after the race. In fact, at about 20-metres into the eighth lap he tried in earnest to get some to come up – to get it over with.

“I tried so hard to vomit there! I figured if it was going to come out let’s just get it out, but I couldn’t,” said Finlayson.

The brew of choice tonight was the Phillips Slipstream Cream Ale.

It is dark amber in colour and is a malt-forward ale that is highlighted with hints of brown sugar and hazelnuts. Finn’s choice is a bottle, twist-off offering Kingston Beer Mile-legal alcohol content of 5.0%.

Slipstream is light on the hops and is an easy-drinking flavour-full ale, brewed in Victoria by Phillips Brewery.

Also in the field tonight was single beer mile runner Nick Walker, who ran a new personal best of 5:54. “I am happy getting below six minutes as that was my target. It is tough going up against Jim and he was going twice as long, with twice as much beer,” said a glowing Walker.

Asked about the former two-mile record at 13:23 being perhaps soft, Finlayson said, “I think someone can go sub-11:00 if they don’t vomit and have to run a penalty lap.”

The five fastest beer mile times and nine of the top 11 all-time are owned by Canadian athletes. The current world best time is an incredible 4:47.00 by Lewis Kent.

Finlayson thrice competed in the IAAF World Cross Country Championships, is a University of Michigan and Victoria Alumnus and Canadian marathon champion.