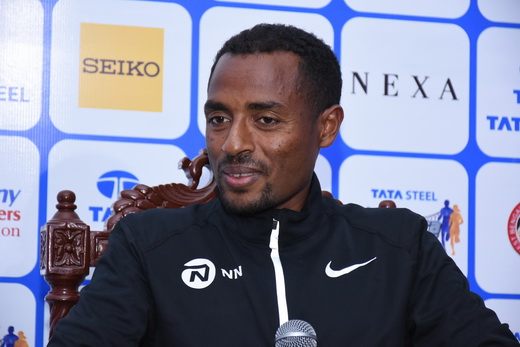 Mutliple world champion and world record holder Kenenisa Bekele will be looking to add to his list of record performances at the TataSteel Kolkata 25K on Sunday 17 December.

Speaking at the pre-race press conference on Friday, the Ethiopian athletics icon said that a serious bid to improve on the 25km world record of 1:11:18, set by Kenya’s Dennis Kimetto in 2012, is likely on race day.

“At the sea level it is possible to break the world record if the conditions are not extreme and if the pollution level is within control, then you can breathe properly and your legs function well. Although I have not seen the track [course] yet, I think I would set myself a target of 1:12,” commented Bekele.

Bekele’s 25km best is 1:12:47, an intermediate time when he ran in the Berlin Marathon last year, which he went on to win in 2:03:03 and go second on the all-time list for the classic distance. If he doesn’t succeed in beating Kimetto’s world record then he aims, at the very least, to improve his own time over the distance and gain some redemption for having to drop out of this year’s Berlin Marathon in September.

“I just could not run [in Berlin]. I could not enjoy what I was doing. My legs could not find grip on the surface. It was filled with water and hence I dropped out. But since then I have trained well and recovered well, and am ready to run this distance,” he added. It will be the first race ever in India for Bekele, a three-time Olympic gold medallist and 18-
time world champion on the track and cross country, but he has visited the country in the
past as a guest of the TSK25K race promoter Procam International and as an as an
ambassador for the Airtel Delhi Half Marathon.

“This is a great country. I like to come here. The people are warm and motivate you to do well. I have seen their impact on the runners at other big races here. I will be running here for the first time and hopefully will get a lot of support.”

Bekele, now 35, also took the opportunity to confirm that he has no plans to retire in the next year or so.
He still has his sights set on an Olympic medal in the marathon at the Tokyo 2020 Olympic Games to add to the three Olympic gold medals on the track he already has in his collection. “That is the one [medal] missing in my cabinet,” he reflected. If Bekele is successful in Tokyo and wins over the classic distance, he would become the
oldest Olympic marathon gold medallist, an honour currently held by Portugal’s Carlos Lopes who was 37 when he won in 1984.

Heading the TSK25K women’s field, after the recent withdrawal of former world half-marathon record holder Kenya’s Florence Kiplagat, will be two fellow Kenyans Helah Kiprop and Valentine Kipketer.
The full elite field for both the men’s and women’s races can be found on the TSK25K website here.

We noticed you're visiting from Poland. We've updated our prices to Polish złoty for your shopping convenience. Use Canadian dollar instead. Dismiss