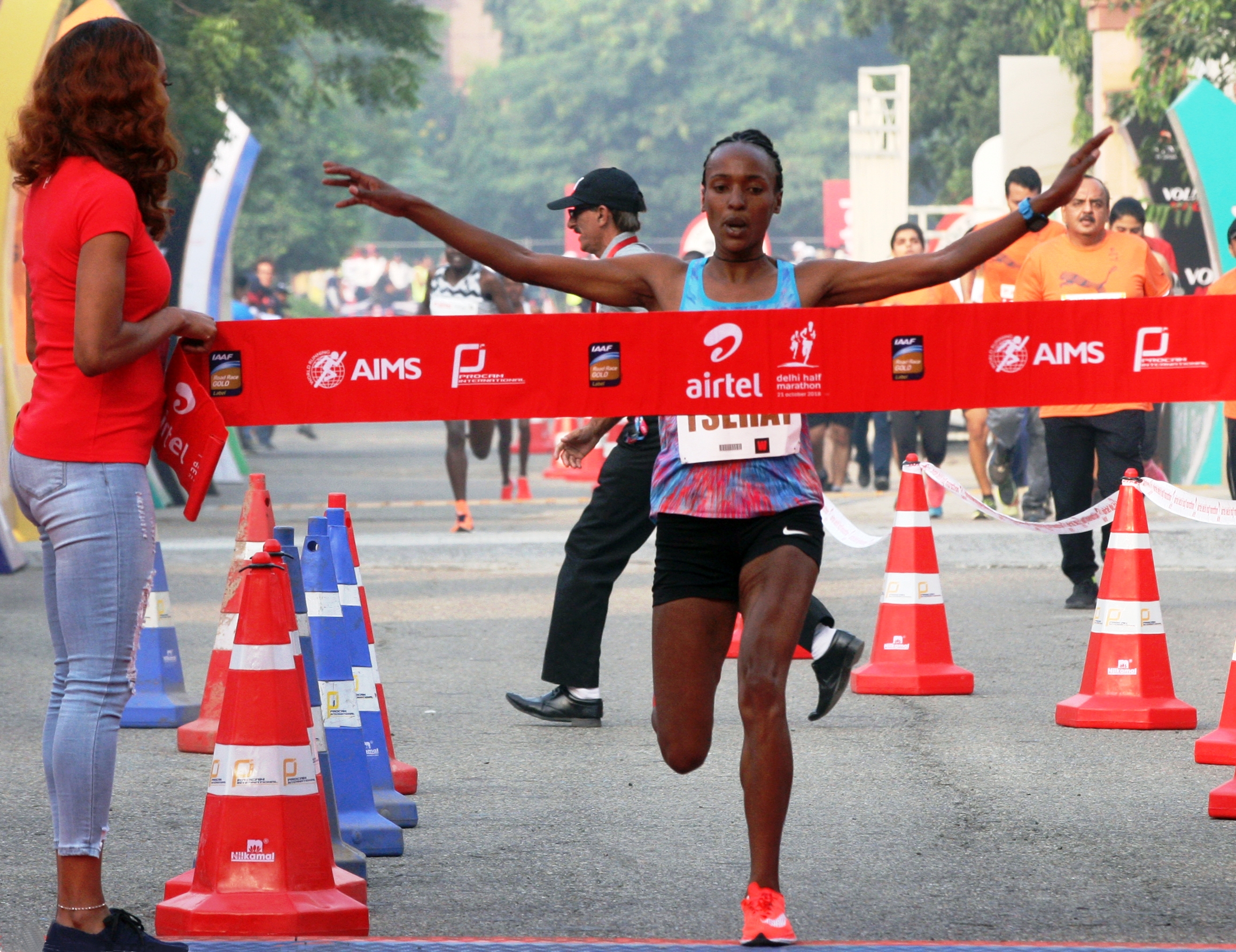 Procam International announce that Ethiopia’s Andamlak Belihu and Tsehay Gemechu will return to the Airtel Delhi Half Marathon to defend their titles at the 15th edition of the IAAF Gold Label Road Race on Sunday 20th October.

Belihu won in India’s capital city last year in 59:18, just missing out on the
course record of 59:06 held since 2014 by his compatriot Guye Adola.
“Immediately after last year’s race, I said that I was going to come back to Delhi
in 2019 as I had unfinished business with the course record and I am keeping
my promise,” commented Belihu, who will be just 20 on race day.

He returned to India in May to win the TCS World 10K title in Bengaluru,
another IAAF Gold Label Road Race promoted by Procam International.
In 2018, Belihu surged hard and made a decisive run for home over the final
third of the race but still had to work hard to hold off his fellow Ethiopian
Amdework Walelegn to win by four seconds and the latter also returns with the
ambition of going one better in this year’s race.

No less than eight men in the ADHM 2019 elite field have run under the world
class benchmark of one hour but much of the attention will be on a man who
has yet to run the distance, Hagos Gebrhiwet.

Gebrhiwet had planned to make his half marathon debut in Delhi last year but
a late bout of illness curtailed his training and he had to cancel his trip.
However, he will stand on the start line this year and could come to Delhi
clutching another world championships medal on the track, to add to the two
he has already won over 5000m from 2013 and 2015.

He has been named to the Ethiopian team for both the 5000m and the 10,000m
– and leads the world this year over the longer distance – at the IAAF World
Athletics Championships Doha 2019 which gets underway on Friday.

The fastest man in Delhi this year will be Erick Kiptanui. The Kenyan notched up two impressive half marathon victories in 2018 when winning the high-quality Lisbon and Berlin, coming home in the German capital in a personal best 58:42, and he is currently equal seventh on the world all-time list.

In 2019, Kiptanui has been concentrating mainly on the track but had a solid
win at the Barcelona Half Marathon earlier in the year.

Last year, Tsehay Gemechu made a huge impact in on her debut over the
distance when she set an Airtel Delhi Half Marathon women’s course record of
66:50 and in 2019 she has shown it was no fluke with a string of sparkling
performances both on the roads and the track, including taking the African
Games 10,000m title.

The 21-year-old Gemechu has also been named to the Ethiopian team for the
5000m and 10,000m at the IAAF World Athletics Championships Doha 2019.
The third and fourth-placed women from the ADHM 2018 also return with
Ethiopia’s Zeineba Yimer and Kenya’s Stacy Ndiwa coming back to do battle.
The fastest woman in the ADHM 2019 elite field will be Caroline Kipkirui. The
Kenyan-born runner, who now competes under the Kazakhstan flag, set a
personal best of 65:07 in the 2018 Ras Al Khaimah Half Marathon and won the
Prague Half Marathon in 65:44 in April this year.

Like the men’s race, the women’s race will also have a highly rated debutant,
with Ethiopia’s Letesenbet Gidey hoping to emulate the achievement of her
compatriot Gemechu last year and win on her first outing over the distance.
Gidey, also 21, has been twice a winner of the IAAF World Cross Country
Championships U20 race and took the senior’s women’s bronze medal in this
year’s event back in March.

Kenya’s Irene Cheptai will be another debutant over the distance. The 2017
world cross country champion followed up that victory with a win at the TCS
World 10K in Bengaluru a few months later.

Cheptai took a maternity break during 2018 but has started to return to world
class form in recent months.

“As we countdown to the landmark 15th edition of the Airtel Delhi Half
Marathon, we are humbled that ADHM, has become one of the most prestigious
and highly regarded half marathons in the world. We are excited to have both
our defending champions, back at the ADHM 2019,” commented Vivek Singh,
joint managing director of race promotors Procam International.

“The fact that they may be on the start line in Delhi with medals from Doha to
their name will enhance the event’s profile and appeal, both within India and
internationally. We wish our runners the best of luck on the track at the
forthcoming IAAF World Championships in Doha,” he added.