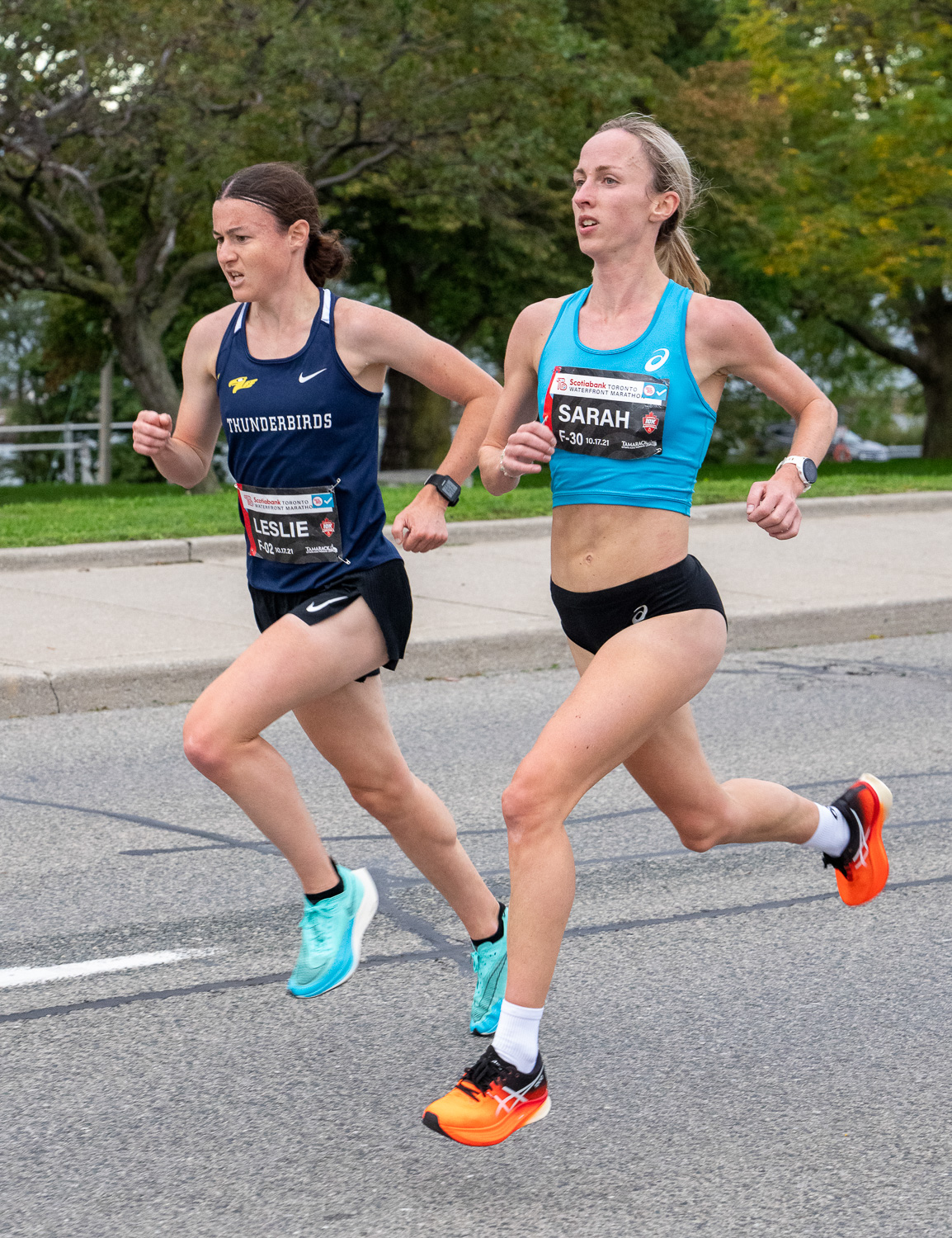 With an abundance of Covid pandemic caution, the 2021 Athletics Canada 10K Championships signalled a return to in-person racing this morning on Toronto’s Lake Shore Boulevard. When it was over, Ben Flanagan and Leslie Sexton were crowned national champions.

Flanagan, who narrowly missed a Tokyo 2020 Olympic berth, returned from his training base in Charlottesville, Virginia, to capture the gold and the accompanying $5,500 first-place prize money but he had to battle hard for the victory.

His 28:45 on the out-and-back course represented a splendid debut at the distance but he was chased to the finish by Vancouver’s Luc Bruchet, a two-time Canadian Olympian at 5,000m. Flanagan and Bruchet fought tooth and nail over the final kilometre, and the latter was forced to settle for second place in a personal best of 28:52. He earned $3,000 for second.

“It feels great,” said Flanagan, who visited family in Kitchener, Ontario earlier in the week. “I am a happy guy. I knew coming in it was going to be a pretty good race and with ten or twelve guys at 6km, it was a race all the way to the line. I kind of had a hunch it was going to be me, Luc, Ben and [Justin] Kent in the last few kilometres, and that is how it worked out. I just gave everything I had over the last 2km to bring it home.

“The plan is only to get better from here. If this is the starting point and we build off of this, this could be a good year. I am really happy to be starting here. I have to make sure I stay healthy and as long as I do, we should be set up for a good summer.”

The bronze medal and $1,500 prize money went to Ben Preisner, who represented Canada at the Tokyo Olympics in the marathon. He finished in 28:56. The native of Milton, Ontario recently moved to Vancouver to join Bruchet with the BC Endurance Project under the guidance of coach Richard Lee. His time represented a personal best by more than a minute. The field benefited from cool 10C temperatures and a flat course.

The women’s division was no less interesting as Sarah Inglis, a Sottish international and permanent resident of British Columbia, forced the pace from the start. The women’s elite race started fifteen minutes ahead of the elite men’s, so she found herself pushing hard into a headwind over the first half of the race before the course turned 180 degrees for the return leg.

Over the final three kilometres, it was the Scot with only Leslie Sexton, another recently arrived Vancouver resident, for company. Cleo Boyd and Natasha Wodak were the nearest pursuers. Inglis and Sexton pushed each other hard and were rewarded with PBs of 31:59 (Inglis) and 32:04 (Sexton). As she crossed the line, Sexton pumped her fist hard realising she was Canadian champion.

“It was a happy fist bump. I was hurting pretty bad but I couldn’t be any happier,” said Sexton, the 2017 Canadian Marathon Champion. “I made a little move on the hill around 7km and tried to catch Sarah, but it turns out she had more to give and she surged again.

“No regrets. She is just super fit. It felt like it was Sarah’s race and there happened to be a Canadian Championship behind her, to be honest, but chasing her pulled me to a fast time.”

The $5,500 first-place prize money will come in handy for Sexton who pointed out, “Living in Vancouver is expensive, man!”

The effervescent Inglis was delighted with her performance today and had been favoured by her competitors earlier in the week. Clearly, she is in the shape of her life and being ineligible for the prize money and medals didn’t reduce her enjoyment of the day at all.

“It was great,” she said through a face mask. “I kind of planned to go hard. I knew I was in PB shape and even with the wind I was like, ‘I am going to go out hard and if they come with me great.’ Leslie and I had a great battle. It helped me get to a faster time.

“I led the whole way but then she drew up next to me and that gave me a kick in the bum to get back towards the finish. I never looked behind me, but people were saying, ‘C’mon girls’ plural. That means she is close by. Honestly, I didn’t know until the last 100m I was clear.”

The silver medal went to Cleo Boyd (33:21) with Wodak taking the bronze.

The race was limited to 5,000 entrants due to Covid restrictions and runners had to wear a mask until they crossed the start line. First to go out and return was Paralympian star, Josh Cassidy, who soloed in the wheelchair race to a time for 21:50.

“I used to live near Lake Shore Boulevard near High Park and never raced any STWM weekend events, so this was really fun to do,” Cassidy declared. “They just made this [wheelchair] event a couple of weeks ago, so it worked out with my schedule. It was a demonstration. Hopefully, it is something to build on for the future with prize money and a bigger field. It’s funny, whenever I am driving roads, I am always eyeing them up for training. And on Lake Shore, you can never do that unless it’s shut. It was fun to get out there, a fun course.”

A more personal competition played out near the back of the field as Olympic 50K race walker, Evan Dunfee, fought his brother Adam for family bragging rights. Dunfee, who is planning to race next year’s World Team Race Walking Championships, Commonwealth Games (10km on the track) and World Championships (35km). Dunfee finished in 41:34.

“He was running while I was walking,” Dunfee revealed. “We thought would be evenly matched. He has been running regularly to get in shape, but I don’t think he has put on a race bib in 20 years. He kicked my butt today. It was really awesome. I am really happy with what I did today. Dealing with a bit of [a] hamstring [injury] and to walk 41 and a half coming off Tokyo with a torn hamstring I will take that.”