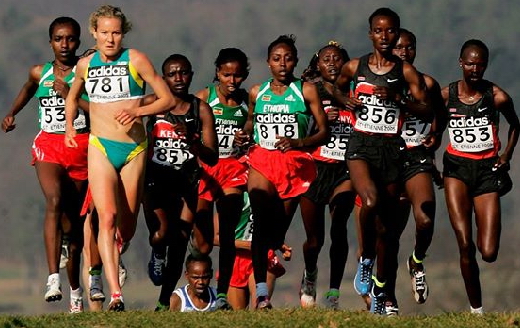 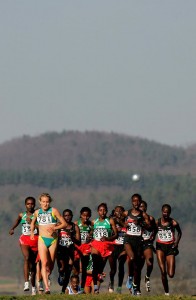 Benita Willis (nee Johnson) is one of Australia’s all-time great distance runners. She won the 2004 IAAF World Cross Country Championships that took place in Bruxelles, Belgium, which included runners like Ethiopians Ejagayehu Dibaba and Worknesh Kidane, Alice Timbilil of Kenya and the great Lornah Kiplagat  who was running for the Netherlands.

Willis owns a 30:37.68 10,000-metre personal best from the 2003 IAAF World Championships in Athletics. Then, it was the 13th fastest in the world, all-time, but it was a high-end race that saw her finish eighth. Otherwise until that event, there were only five performances that were faster, including the questionable 29:31.78 by China’s Wang Junxia, which is still the world’s fastest time, 23 years later.

She was a nine-time World Cross Country Championships competitor and four-time Olympian. Willis has now moved on to coaching, however continues to remain active.

Christopher Kelsall: You grew up in Mackay in Queensland, yes? Did Mackay provide a good environment and culture for sport?

Benita Willis: Yes for sure. As a youngster, I was heavily involved in sport especially backyard games with my two brothers and sister.

CK: What sports did you grow up participating in, were you close in age?

BW: Yes we were close in age so it made for very competitive teams in everything from (field) hockey to cricket to rounders to netball (across the road at the primary school we went to). The games used to finish when it was too dark to see the ball or mum was yelling “dinnertime”. I also played tennis, squash, netball, hockey and touch fixtures throughout school at some stage with hockey being my favourite. We didn’t do heaps of training for running but did enjoy running on the beach with my dad.

CK: Did you play much in the way of organised sports?

BW: I started playing hockey when I was in year one and it was my main sport through primary and high school amongst other sporting interests and also played the trumpet, participating in school musicals etc. Also was in the Australian hockey team in 1995 and 1996 and the squad for the Sydney Olympics. I switched sports a few years out from Sydney to athletics and ended up qualifying for my first of four Olympic Games in the 5,000-metre event.

CK: What transpired that would motivate you to move from something as life-consuming and sport-specific as hockey to athletics?

BW: I started hockey when I was six years old and only really did running three months a year from high school. Hockey was my main sport going up, but I did win the National Athletics All Schools titles when I was in year 10, 11 and 12 in the 800m and 1500m, so was pretty talented as a runner but didn’t train much. Didn’t have fast times but was very good at racing and enjoyed racing more so than training or time trial type running.

I did both right up till the year I moved to Canberra on an Australia Institute of Sport (AIS) running scholarship and still played A-grade hockey for ANU and we won the premiership. That was amazing as I had never won an A-grade hockey premiership (hockey is very strong in Canberra). I got injured at the end of that year and as a result (injury could have been because I was training harder for running and doing hockey too) so decided to choose and at that time, I was improving rapidly at running so wanted to give it a 100% go so I quit hockey all together.

CK: Of all your athletics successes, would you consider your 2004 IAAF Cross Country Championships win and your 2006 Chicago Marathon time of 2:22:36 your two best performances?

BW: Yes but also winning a bronze medal at the IAAF World Half Marathon Championships in 2003 was one of my great achievements in my first half-marathon against a stellar field. Also I feel that winning the Great North Run in 2004 and Berlin Half Marathon in 2005 were achievements too.

CK: Can you describe some of your training? For example, during the off season what would a typical week of training look like?

CK: Is there a coach or specific method that you followed throughout your career? Who would that have been?

CK: Do you continue to run at a competitive level? Will you be attempting standard for the Rio Olympic Games?

BW: No I am not running any more, I have been retired since 2013. I hope to go as part of the team management but if not, will watch closely on television as I have many friends around the world still competing!

CK: Apparently you lost the passion for it. Do you still you still get in some running to keep healthy?

BW: Yes I still enjoy running with people I coach and do the odd fartlek session before work here and there. Love being outside and feeling fit. But don’t really do long runs much anymore or organised type training.

CK: Can you tell me about Fitnance?

BW: I completed my personal training certifications through Fitnance. It’s an awesome gym and training centre under the guidance of Steve Nance and Chris Weier. I have my own business that’s mostly online coaching at the minute but would like to expand into public speaking /group training at corporate conferences or just day to day operations.