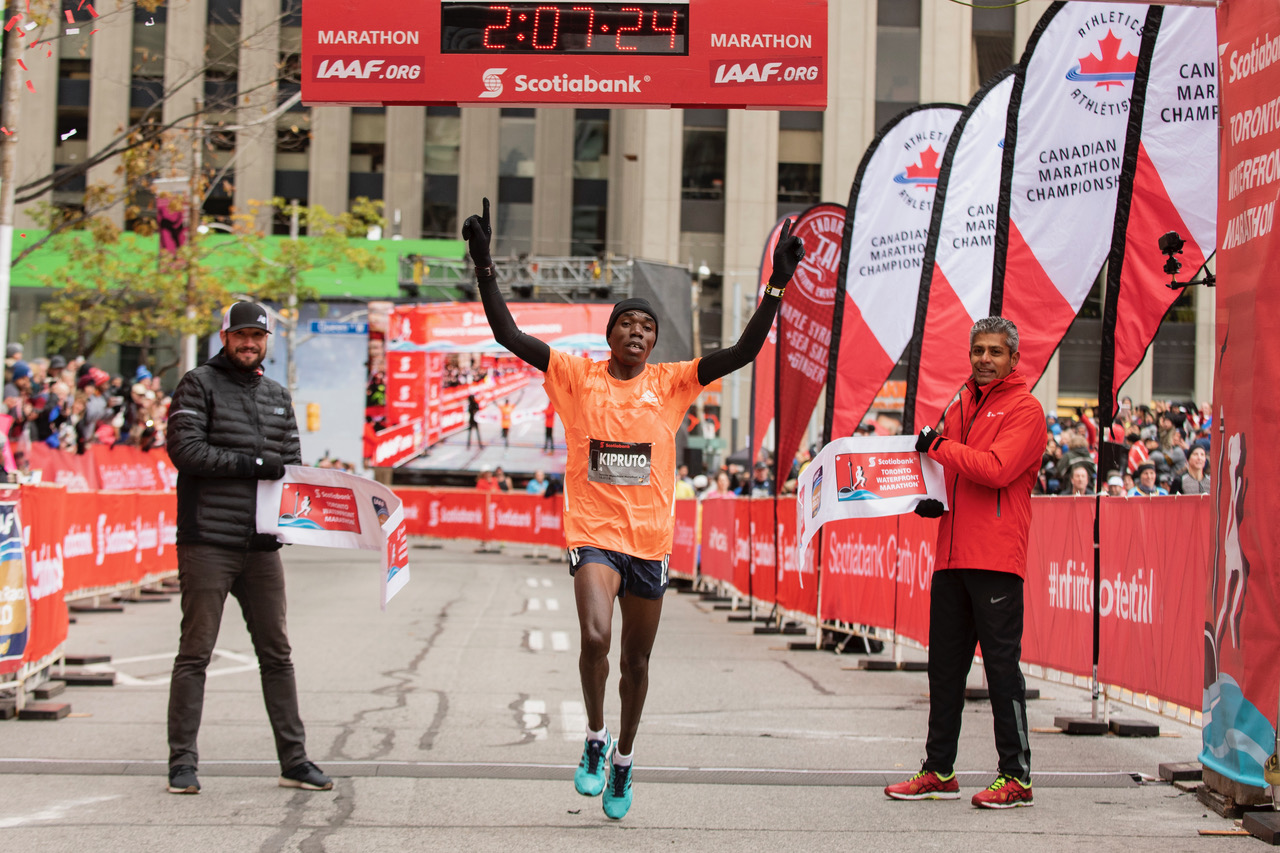 “If I can defend my Toronto [Waterfront] Marathon title it will be very good for me and for my marathon career,” he declares with a smile. He remembers well the joy his 2:07:24 performance brought him and the festivities which followed upon his return to Kenya.

“This year I would like to run my personal best in Toronto. Hopefully, if the weather will be good and also if the pacemakers do a good job, I am hoping to run maybe 2:06 and maybe try to run a course record.”

Kipruto’s best is 2:07:11 set in finishing third at the 2018 Seoul Marathon and he also ran 2:07:21 at the 2017 Gongju Dong-A Marathon in Korea. With three recent 2:07 results he is clearly on the verge of another major breakthrough which could see him tackle the current Toronto course record held by his compatriot Philemon Rono (2:06:52 in 2017).

Asked what his greatest impression from last year’s five-day visit to Toronto as he is quick to credit the organizers.

“The people I met, they are friendly like the first one, Alan Brookes the Race Director, he is very friendly,” he reveals. “The course itself is good. And also, I think the weather that day was not so good.”

“I would say it opened doors to my future,” Kipruto explains. “I was invited to the 2019 Boston Marathon because of Toronto. So my name has grown. (Toronto) was my first victory.

“Boston was a good performance for me; I managed to finish, first of all. I was injured during the race.”

Kipruto’s feet were badly blistered during the race. But his coach Claudio Berardelli offers another explanation saying that he pushed Kipruto perhaps too much over the final three weeks of his preparation and so he was also over-trained. Ultimately, he finished a respectable 10th in 2:09:53 within two minutes of the winner Lawrence Cherono, also from Kenya.

Performing at this level has paid dividends for Kipruto. First place in Toronto earns CAD$30,000 while a course record is worth another CAD$40,000. In a country where the per capita income is less than $2,000 it is a lucrative business. He sees it as an investment for the future.

Though he was born in the village of Tolilet he recently bought some land 40 kilometres away in Kapsabet and moved his wife and one-year-old daughter, who is called Princess Camille Chemutai, to the place.

The runners live in a basic dormitory and begin their morning runs before the sun rises. This is to avoid traffic which can pose a danger not to mention the dust that is kicked up on the dirt roads surrounding Kapsabet.

“We run very early in the morning and as the race approaches we run twice a day,” he confirms. “After doing a morning run we go for an evening run. We take all our meals together After eating we tells stories and watch TV Sports. Currently we are watching the African Cup of Nations football. For football clubs I like Barcelona.

“We train together and motivate each other. I would like to represent my country in the Tokyo Olympics if possible.”

Like many Kenyan runners Kipruto has been running since he was a child. It didn’t hurt that one of his older brothers is Dickson Chumba who, besides winning both the Chicago and Tokyo marathons, finished 2nd in Toronto in 2017. Chumba no longer trains in Berardelli’s group, however.

There is no doubt that Kipruto has a bright future but since few Kenyan runners compete purely for the enjoyment of running he has already begun preparation for life after running.

“I have some rental houses and I also raise some animals,” he reveals. “Maybe I can run six to seven more years. I would be grateful.”

Another victory in Toronto would further solidify his family’s future.