Fiona Benson’s stand-out season (in the 800-metre event) started in Victoria, BC on May 30th and ended in Beijing, China on August 27th. The 87 day span of competition saw her, in the parlance of basketball, hit nothing but net. She had so many highs that not making the finals at the 2015 Beijing IAAF World Track and Field Championships was, albeit disappointing, not the cataclysmic failure that your typical world class athlete would consider it to be. No beverage-fuelled binges or visits to the shrink required. Her season was a victory in itself and it couldn’t have happened to a nicer person.

“She is what you see, humble, polite, honest, unassuming, sincere, innocent, quiet, shy. She makes people around her better. Honestly, she has had to learn to be more cutthroat in her racing. She has wondered aloud how others felt when she beat them,” shared Coach Mark Bomba.

Former Trinity Western University Head Coach, Laurier Primeau when asked about her improved performances said, “There isn’t a nicer person in world – she deserves all the success that comes to her. Fiona embodies TWU’s Complete Champion Approach!”

Consider that going into the May 30th track meet in Victoria, BC her personal best in the 800m event was 2:08.54. She had recently graduated from TWU, was focussing more on the 1500m event than anything and suddenly, in a do-nothing track meet, she po 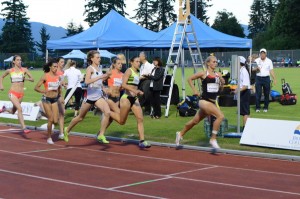 To keep things real, Stellingwerff was coming back from pregnancy, although at this time she was fairly fit and was racing an under-distance event to engage some of her get-down speed, she owns a 2:01.22 personal best, by the way. Stellingwerff is a 1500m specialist as is Van Buskirk, who was nursing a little injury, but still. Also in the race was 2:02.18 800m runner Rachel Francois from the University of Victoria – that’s six seconds faster than Benson. I said Stellingwerff and Van Buskirk are 1500m specialists didn’t I? So was Benson.

Benson ran 2:01.58 that night. That performance was just the beginning.

The two-minute barrier for 800-metre runners is a benchmark that seems to separate the global championship competitors from the very good. Actually, technically-speaking, it’s one second slower as sub-2:01.00 is the qualification standard for the world championships as well as the 2016 Rio Olympic Games. In addition to running under 2:01.00, the athlete must be one of the top three in the country and finish top-three at the national championships.

Until 2012, Canada had two athletes that ran under two minutes, all-time. The first one to do so was Charmaine Crooks. Her best is 1:58.52, which she accomplished in Zurich in 1990.

Eleven years later Diane Cummins bettered Crooks’s record with her performance in Rieti, Italy in the time of 1:58.39. There it stayed for another 11 years until 2012.

Melissa Bishop of Eganville, Ontario turned heads in Eugene, Oregon when she became just the third Canadian all-time to better the two minute benchmark. She ran 1:59.82. That same year, North Vancouver’s Jessica Smith followed suit with a 1:59.86 during the Harry Jerome Track Classic. That’s four athletes under two minutes all-time in the 800m.

Then along came Benson.

Benson and Coach Bomba decided that if she is going to be the fastest in Canada (so far for 2015) during a global championships year (worlds and Rio Olympics next year), then she might as well pursue the 800m distance further to see what may come of it. They put the 1500m event on the back-burner for now.

When recovered from injury and after a few encouraging workouts, she raced to the Canadian lead time for 2015 with that 2:01.58 performance. She followed up that race with three more personal bests including 2:01.48 at the Harry Jerome Track Classic on June 8th and 2:01.02 at the Victoria International Track Classic, two nights later. She lost the Canadian lead time to North Vancouver’s Jessica Smith once, and then took it back with an eye-popping performance in Portland, Oregon.

On June 14th, at the Portland Track Festival, she was seeking sub-2:01.00 – she ended up running 1:59.94, to become just the fifth Canadian ever to break the two-minute barrier, while sort of qualifying for the 2015 Toronto Pan American Games.

When asked about her season, Benson told Athletics Illustrated, “Running has always been an elevator to life experiences for me, but this summer I ran fast enough that running has become a serious pursuit in itself. When I broke two minutes I said I was 110% happy with the season, and I stand by that! At the same time, when you don’t make the final at a meet, it feels a little like pulling up in the middle of a race, and I can’t wait to get going again!”

To qualify for the Toronto Pan American Games, athletes just needed to have had the best or second best performance during the qualifying period, which started January 1st and ended on June 27th. The athletes also must have declared by May 1st that they intend to compete. She didn’t run the Pan Am Games, because Benson did not declare her intentions.

Meanwhile Melissa Bishop was rebounding from an ankle sprain that happened in early May, racing all the same races as Benson. The two tied in Victoria at 2:01.02 and the win was credited to Benson. Seconds after they finished Bishop didn’t hesitate to point out that it was Benson who won. The camera could hardly tell, certainly the clocks didn’t, but that is how fine-tuned an elite middle-distance runner is. Bishop went on to win gold in the Pan Ams in the time of 1:59.62.

Benson’s first race at worlds saw her finish in 2:00.53, fast enough to get her into the next round. She pulled her calf a little, which prevented a couple of key workouts from taking place. She didn’t miss enough to affect her fitness; however, during the semi-final she could still feel the calf. She was in the mix for the win, however, would need a final 100m sprint. The calf wouldn’t allow it and although she again set a personal best at 1:59.59, she was out of the finals.

Benson’s unexpected arrival on the international racing scene was an exciting turn of events for a graduate who wasn’t even sure what life was going to offer her next. In total she set at least five new personal best times in the one event, won the national championships and ran her fastest time in the semi-finals at the 2015 IAAF World Track and Field Championships, peaking (aside from the calf issue) right on time.

“Every girl on the line earned her way there so I never assumed I would make it on, but the whole Worlds experience has sure given me motivation for the coming year,” shared Benson.

Her breakout season is the stuff dreams are made of and 2015 is perhaps just the beginning of that dream. Next, she will try to tackle that 1500m distance with some races in Europe; the event she was specialising in before she popped that first big personal best time; just to see what may come of it.