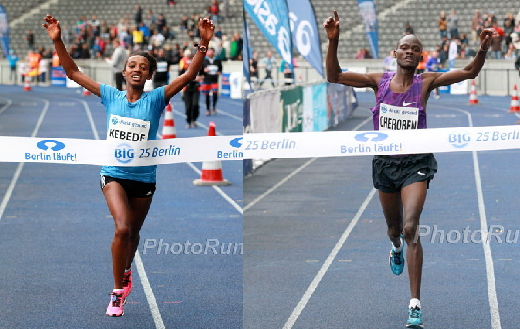 Ethiopia’s newcomer Sutume Asefa Kebede produced a stunning performance in the BIG 25 Berlin on Sunday. The 21 year-old stormed away after the start of the traditional 25 k race and kept going right to finish line in the historic Berlin Olympic Stadium, smashing the Ethiopian record with a time of 1:21:55. Despite very windy conditions she was 19 seconds faster than Ejegayehu Dibaba in Chicago in 2011. Kebede’s time is a world lead and the fifth fastest ever run at this distance. The Ethiopian was more than four minutes faster than second placed Kenyan Winny Jepkorir who clocked 1:25:59. Elizeba Cherono of Kenya was third with 1:26:59.

Abraham Cheroben defended his title with a world lead of 1:12:31. The Kenyan was almost a minute ahead of Temesgen Daba Ejerssa. The Ethiopian took second in 1:13:28 while Kenya’s Kenneth Kipkemoi was third with 1:14:18.

As expected the men’s races started very fast. This is partly because the course is slightly downwards during the first five kilometres. But today the wind was also a major factor. During the first 10 k it was mostly a tailwind, which led to split times of 14:06 and 28:30 at 5 and 10 k respectively. Led by a pacemaker the four leaders – besides Cheroben, Ejerssa and Kipkemoi there was also Kenya’s Frederick Ngeny in this group – were running at world record pace. This mark of 1:11:18 was established by Kenya’s Dennis Kimetto, when he won the BIG 25 Berlin in 2012.

However once the leaders passed the 11 k point, where the pacemaker dropped back, they faced a strong headwind. With forecasted wind gusts of up to 60 kilometres per hour corresponding to 7 on the Beaufort scale there was no chance of keeping this sort of pace during the remaining distance. Kilometre splits dropped by almost ten seconds from 2:51 to slightly over three minutes during some sections.

Shortly before the 15 k mark, which was then passed in 43:04, Ngeny was the first one who dropped back from the leading group. The Kenyan finally finished fourth in 1:14:49. When Ejerssa worked hard in the lead he managed to drop Kipkemoi after 17 k. But the Ethiopian could not run away from Cheroben. The defending champion, who ran a world-class time of 1:11:47 a year ago, then started to attack with around six kilometres to go. On a slightly uphill stretch Cherono build a decisive lead.

“I intended to attack the world record today. But with such strong headwinds during the second half of the race it was not possible,” said the 22 year-old. “I will have to come back next year and try again.” Cherono will now prepare for the Kenyan 10,000 m trials for the World Championships. “It would be great if I could snatch a place for Beijing.” But whatever happens he will not run a marathon this year. “This is for the future, I will continue running shorter events on the roads first.”

In the women’s race Sutume Asefa Kebede ran at her own pace right from the start, leaving the other elite women well behind. Following a pacemaker she passed the 10 k point in a breathtaking 31:05, well inside world record pace. Kenya’s Mary Keitany had run 1:19:53 in the BIG 25 in 2010.

But Kebede, who now has won all of her seven road races this spring, also slowed in the wind. However she still achieved a world-class time of 1:21:55. Passing the half marathon point before, which has an official timing, she was clocked with 68:23. This is by far the fastest half marathon time of a woman on German territory since spring 2013.

“I am very happy to have broken the Ethiopian record. I did not expect this to happen today,” said Kebede, who now intends to run the 5,000 m on track in Ethiopia. “In the autumn I will run road races again.”

More information is available at: www.berlin-runs.com