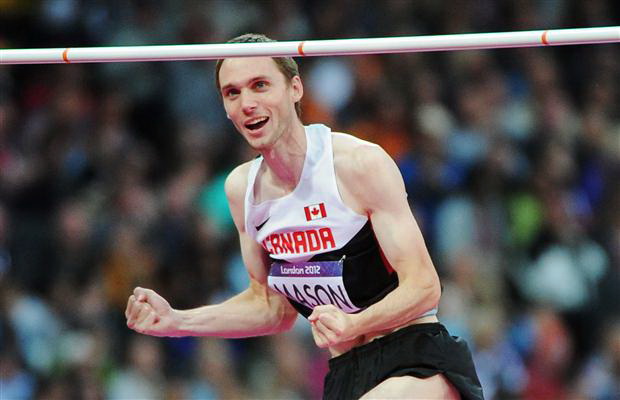 The 2018 Harry Jerome Track Classic is promising to be a thrilling meet with international athletes scheduled to compete in the June 26 and 27 event. Andre De Grasse, Mike Mason, Damian Warner and a strong contingent of sprinters from China are the latest to be named to the meet.

Three-time Olympic bronze medallist Andre De Grasse will be competing. The 23-year-old from Markham, ON., finished fourth at the 100-metres at the Drake Relays in Des Moines, Iowa, his first race since a hamstring strain forced him out of last summer’s IAAF World Track and Field Championships in London.

De Grasse will be part of the Canadian team that faces off against top sprinters from China at the Jerome in the China-Canada Sprint Challenge, a ten-event competition over the two days.

This will be De Grasse’s third consecutive year at the Jerome meet and will provide him the opportunity to race on the newly refurbished running service at Swangard.

Also competing is Nanoose Bay high jumper Mike Mason who has competed in 13 Harry Jerome International Track Classics. His 14thtime could end up being a record-breaking appearance.

The men’s high jump record for the Jerome is 2.31-metres, set back in 2009 by American Jesse Williams. Two weeks ago in Victoria, Mason, representing the Nanaimo track and field club, cleared 2.32-metres on his second attempt. It currently puts him tied for fourth on the IAAF World best list for this year. The leader is Essa Barshim of Qatar, who has the two top jumps at 2.40 and 2.36-metres.

Mason’s best performance at the Jerome meets is 2.28-metres.

Can Mason break the Jerome record on June 26 at Swangard Stadium? “I usually don’t focus on a specific number,” he said, “but I have been feeling good so hopefully I can get a good performance at Jerome this year.”

A three-time Olympian and UBC grad, Mason won a silver medal at the 2009 World University Games and a bronze at the 2014 Glasgow Commonwealth Games and another silver at the 2015 Toronto Pan American Games. Back in 2004, Mason won the IAAF World Junior championship, becoming only the second Canadian to win that World gold medal. The first was Mark Boswell in 1996.

Damian Warner found his sweet spot at the 44th Hypomeeting in Gotzis, Austria earlier this week. The Canadian Olympic medallist decathlete was finally healthy after a virus-plagued IAAF World Championships last summer in London. He also avoided a no-height in the pole vault that eliminated him at the 2018 Gold Coast Commonwealth Games in Australia this spring.

He delivered an amazingly strong two days in the 10-event challenge which many consider to be reflective of the greatest athlete in the world. He moves to the top of the 2018 world list and breaks his own Canadian record by 200 points with his 8795 points.

BIE Ge and his teammates on China 4x100m relay team set a seasonal best in Osaka on May 20th as they prepare to meet Canada in the Team Sprint Challenge for the Pacific World Cup in the 35th Vancouver Sun Harry Jerome International Track Classic on June 26th and 27th at Swangard Stadium.

China recorded 38.72 seconds to secure an eighth place on the 2018 world ranking compared to Canada’s 11th spot 38.97 set in April in Brisbane, Australia.  Fighting, Flying Man from Chonqing, BIE Ge said “All the efforts I’ve paid this year are for the Olympic Games, ……I hope I can make it to the 2020 Tokyo Games.”  His team will include LIANG Jinsheng,  XU Zhouzheng, MI Hong and XU Haiyang in the 4x100m at Burnaby’s Swangard Stadium.

“The roots of my success are really important to me,” said De Grasse. “I wouldn’t be where I am today if it weren’t for my education, the resources made available to me and the mentorship and support of my first coach, Tony Sharpe, my mom and countless others along the way. I am very excited to pay it forward and to give others the same opportunity by empowering youth to realize their full potential through sport and education.”

The Andre De Grasse Family Foundation (ADGFF) will be a public charitable foundation committed to empowering and inspiring youth through sport and education. Andre’s namesake foundation seeks to inspire youth to reach their own unique potential by providing them with similar opportunities that made Andre a champion in sport and in life. Launching with the establishment of the Andre De Grasse Future Champions Fund, the ADGFF will expand its impact over the coming years by teaming up with other organizations that provide mentorship and/or resources to youth across Canada. The Foundation’s vision reflects Andre’s mantra, to Speak It Into Existence.